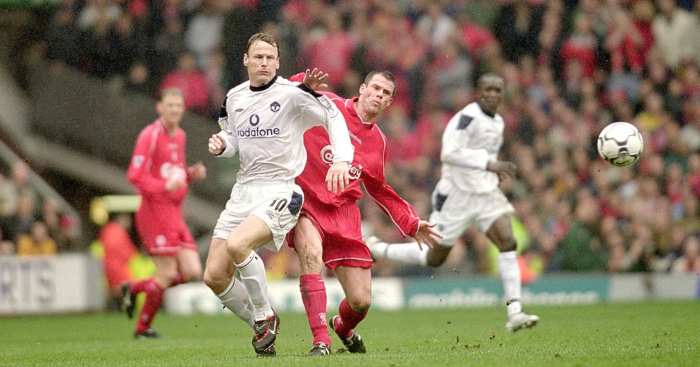 Liverpool legend Jamie Carragher claims that one of his former coaches used former Manchester United striker Teddy Sheringham “as a reference” to help him improve his game.

Despite being known as a centre-back in his career, Carragher – who won the Champions League with Liverpool – actually started out as a centre-forward in his youth days.

Keith Blunt, who was a coach at the national school, wanted Carragher to improve his ability to hold the ball up and he used former England international Sheringham as the perfect example.

“I went to the national school as a centre-forward, and it was a different way of playing than what I’d been used to at Liverpool, it was a lot more direct,” Carragher told Sky Sports.

“I don’t mean that in terms of smashing the ball long, but it was a case of getting the ball into the striker as quick as you can, and I was a striker.

“And there was Teddy Sheringham who was brilliant at holding the ball up, and that was a big thing at the national school, to be able to hold the ball up.

“It was about getting ‘side on’ so your full body was between the defender and the ball.

“I think Sheringham was really good at that, and he used to get spoken about a lot by the coach, the late great Keith Blunt, who was at the national school.

“He used to use him as a reference as I think Keith had been the youth coach at Tottenham, so he had links with the club, it was early 90s and I think Sheringham had just moved from Nottingham Forest to Tottenham at the time.

“He was someone we used to watch a lot because that’s the way we used to play the game.”