Home All The News Liverpool legend: Red card ‘not enough’ for ‘disgraceful’ Richarlison 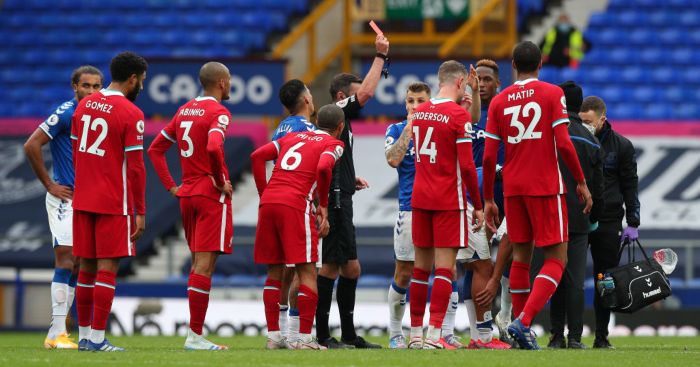 Liverpool legend John Aldridge believes the red card that was dished out to Everton forward Richarlison in Saturday’s Merseyside derby was “not enough” punishment.

Dominic Calvert-Lewin’s header salvaged a 2-2 draw for Everton in a controversial 237th Merseyside derby at Goodison Park which saw Richarlison sent off late on.

Everton had already escaped a red card and a penalty for goalkeeper Jordan Pickford early in the first half for a knee-high challenge on Virgil Van Dijk, which ended the Holland captain’s afternoon, but there was no VAR reprieve for the Brazilian’s lunge on Liverpool midfielder Thiago Alcantara.

MAILBOX: Liverpool have got away with plenty. And more mails…

Aldridge told the Sunday World: “That tackle was disgraceful, there is no other word for it. He has gone over the top of the ball and that is the kind of tackle that can end a career.

“Thiago is 29 and if he breaks his leg badly there, he might struggle to get back to his best. So the red card was not enough for Richarlison.

“That should not be a three-game ban, it needs to be much more than that and if Thiago has got away with it, he is very lucky.”

“I don’t think Pickford was malicious in that challenge as he is a keeper who makes a lot of mistakes and appears to panic at moments like that. It was a clumsy challenge rather than a reckless one, but everyone agrees it was worthy of a red card.

“The idea that the VAR official was too distracted by the tight offside decision to see the challenge on Van Dijk is a joke and this needs to be a moment when we look at who is in charge of the VAR decisions.

“Maybe we need to get more experienced referees in because Coote has a history of missing big calls and now he has missed another massive one.

“He was in charge of the Man United v Liverpool game last season and missed a clear foul on Divock Origi in the build-up to the United goal and was also at fault for missing a horrible challenge in the Chelsea v Spurs game last season.

“There is no excuse when you can see these incidents from so many angles and while VAR is useful for some aspects of the game, there is a huge problem if the technology is not used in the right manner.”