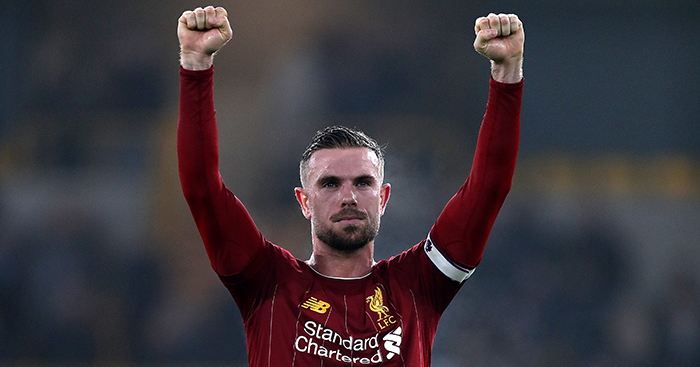 Liverpool captain Jordan Henderson says he’s “really enjoyed” spending time with his family during the Premier League’s downtime due to the coronavirus outbreak.

As things stand, the Football Association, Premier League, EFL and Women’s Super League are scheduled to resume their respective competitions on April 30 after all were stalled by the coronavirus outbreak.

That date will almost certainly be moved back for the third time when those bodies hold a meeting next week, with an actual time-frame for return likely to be much further away.

It has given players such as Henderson to do things they wouldn’t normally have time to do and the Liverpool skipper’s highlight has been helping his kids with their homework.

“My biggest downs in my career up until this point were obviously injury, I would say. That was the hardest thing for me to deal with personally, but this is a different challenge.

“The time that I’ve spent with my family and my kids over the last couple of weeks is something that I’ve never been able to do before, so I’m just trying to take a lot of the positive things around it.

“I’ve really enjoyed being with the kids every day, helping them with their school work and things that I wouldn’t normally do.

“I’ve just tried to do it as much as I can and enjoy it. But when it is 24/7 it can be challenging at times as everybody will know!

“But I’ve just tried to enjoy this period that we’re going to get. I know it will be for a long period, of course, but just stay positive and try to enjoy it as much as I can because I’ve never really had a block of time like this to be with the kids and my wife for a long time.

“But to do it every day in the morning and help them with certain things, I’ve quite enjoyed that. Like I said, you don’t get opportunities to do that often, so I’m trying to make the most of it.”