Liverpool had their *moment* in January. The next nine days will decide whether it comes with an asterisk or not. 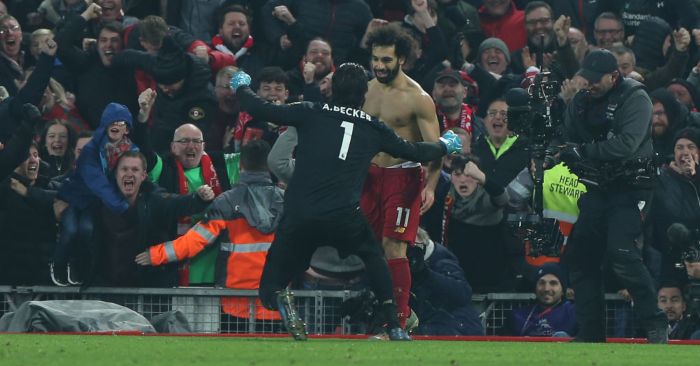 “That’s not just the three points,” said one particular Liverpool legend, his unmistakable voice cutting through a raucous Anfield atmosphere.

“I think everyone in this country now will think ‘that’s the Premier League’ after the result at Man City yesterday,” he continued, his words playing out to a steadily escalating backing track kindly provided by the home fans.

Gary Neville, the filling in an excitable Jamie Carragher and vaguely disinterested Martin Tyler sandwich, did not speak for at least two minutes. Champagne-popping could not have been further from his mind.

It was Liverpool who were celebrating. They had just taken a 2-0 lead against Manchester United, and an unassailable advantage atop the Premier League table with a game in hand. But Carragher had it right: it was “not just the three points”. It represented something different.

For once with Liverpool, this actually did mean more.

From the identity of the scorer – Mo Salah, with his first against this particular opponent – to the nature of a stoppage-time goal in front of the Kop against their most bitter rivals, it was a symbolic, watershed moment; that most elusive glory of the mutual climax.

That game was in mid-January. They have played nine times since. It is a struggle to recall more than one-third of those matches as the procession threatens to become even more ceremonious.

To supporters, that won’t and shouldn’t matter. The magnificence of a first Premier League crown cannot be diluted. Most fans will have seen Liverpool do everything but win a league title, and those that did witness their last have been sustained by that memory for 30 years.

The point at which it is finally guaranteed, when foregone conclusion becomes certain coronation, will be celebrated as vociferously as possible.

But in the aftermath of defeat to Watford, a second loss in three games has placed Liverpool in an almost unprecedented position. A team that was threatening to redefine brilliance could soon become just another synonym for it.

The next nine days are crucial. Liverpool visit Stamford Bridge in the FA Cup on Tuesday before hosting Atletico Madrid in the Champions League a week on Wednesday. Progress in both competitions and immortality can still be achieved. Make it through in one and a cake that was made months ago may yet have a delectable icing. Exit both in the space of just over a week and even Jurgen Klopp would struggle to spin the positives.

It sounds stupid precisely because it is. Liverpool will be Premier League champions. They might yet break records in terms of points, wins and margins. It has been an unfathomable season.

But it will be tinged, albeit briefly, with a strange disappointment if a league title is their solitary reward. The post-Watford discourse showed that even historic success has become normalised; Arsenal’s Invincibles season has been reduced by many to a quirk, an anomaly, a relatively meagre feat in comparison to what they could have accomplished.

For some, it carries the asterisk of what they should have done rather than what they did. Liverpool might soon realise first-hand how ludicrous but inevitable that is.