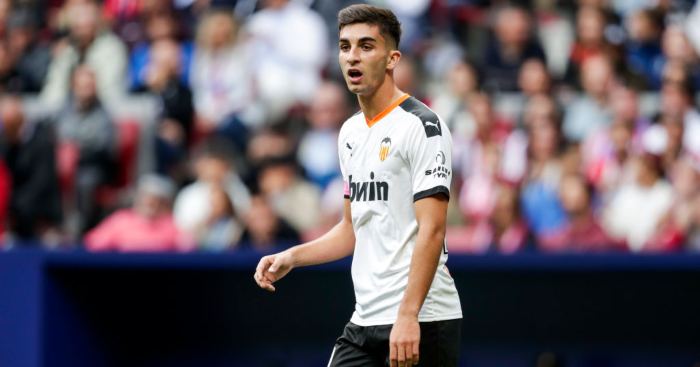 Jurgen Klopp has been advised to snub a potential deal for Borussia Dortmund’s Jadon Sancho in favour of signing a cheaper alternative in Valencia’s Ferran Torres.

The Valencia star has established himself as one of the most promising youngsters in European football, scoring four goals and adding four assists this season before the campaign was suspended.

His impressive form has seen a number of top clubs display an interest with Liverpool, Manchester United, Manchester City, Atletico Madrid, Ajax, Juventus and Borussia Dortmund all linked with a move for the 20-year-old.

FEATURE: Five academy rejects clubs would (and wouldn’t) take back

Torres’ current contract expires at the end of next season, and he is said to be reluctant to sign a new deal – meaning that Valencia may choose to sell him in the summer rather than letting him go for free next year, as reported in the Daily Mirror.

And Spanish football expert Domagoj Kostanjsak claims Klopp would be able to sign him for much less than his £87.5million release clause.

“Torres is one of the brightest players in La Liga – and even in Europe as well,” he told the Blood Red podcast.

“He’s a highly technical winger with pace and he dribbles well. He likes to run and he beats his marker easily most of the time.

“He’s good with both feet and that makes him deadly: he can go inside and shoot or outside and put crosses into the box.

“He’s pretty much the whole package except for his finishing, which still needs a bit of work. But he’s really young, so I would say the sky is the limit.”

Torres could prove to be a more cost-effective option as back-up for Liverpool’s wingers, with Sancho expected to cost in excess of £100m.

Kostanjsak added: “I would say he is like Sancho or even like Vinicius Junior at Real Madrid. [His next move] depends on the playing time he would get at those clubs.

“Jurgen Klopp loves prolific wingers and Torres is one of those. He’s fast, he’s good on the ball, and I don’t think there is a team out there who wouldn’t want him if they could get him.

“I would say that he is way ahead of his age, though, both mentally and sheer ability-wise. His decision making is on point and he has already played on the biggest stages regularly, so he is ready for a step up, but he needs game time.

“Rotting on the bench is going to do him no good.”

Kostanjsak concluded: “If Torres doesn’t sign a new contract and he is adamant about leaving, I think that €60 million would be about right, but €100 million, that’s a bit much even for a gem like him.

“It will be really difficult for Valencia to keep him, but to me, at this moment, it seems like a matter of time – he will become too big for the club.”