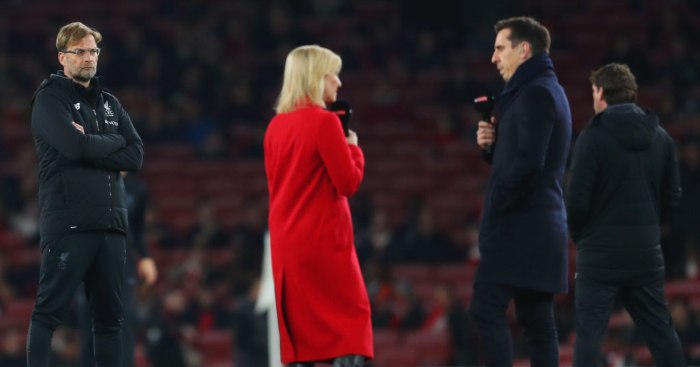 Neville has been outspoken on a number of issues during the coronavirus pandemic, including Carlos Tevez’s attitude during his final year at Man Utd, due to his regular slot on Sky Sports’ The Football Show.

Speaking to the BBC’s Football Focus, Klopp laughed: “I didn’t learn a lot during lockdown except Gary Neville has an opinion on absolutely everything! It’s incredible!”

FEATURE: Aquilani for Alonso and other massive downgrades

The Liverpool boss added: “I know I can deal with difficult situations before and this is a difficult situation not only for me and my family but for everybody on this planet. I am quite proud of how we as a society are dealing with it.

“We as human beings are not perfect so we make mistakes but I think we have understood a lot more of how we are all connected to each other. That is something good.”

On bumping into Liverpool legend Steven Gerrard during lockdown, Klopp continued: “Four-and-a-half years I lived in the town and never met him! I knew where he lives, I live in the house he built and Brendan Rodgers bought and we rent but it had never happened!

“I saw him for sure, walking with his kids and missus. We always keep distant, yeah? But it was nice. I admired him as a player and met him as a guy here and he is a great guy so it was great to see him.”