The Reds face their Merseyside rivals in the noon kick-off on Saturday... 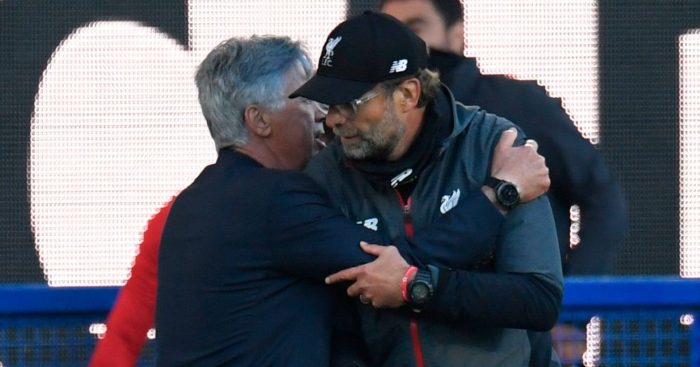 Liverpool boss Jurgen Klopp thinks the summer transfer business done by Everton was “perfect” ahead of the Merseyside derby on Saturday.

The Reds face their Merseyside rivals in the noon kick-off on Saturday with Klopp’s men below their rivals in the Premier League table.

Only four matches have been played but the Toffees have won all of them, while Liverpool lost 7-2 to Aston Villa in their last match before the international break to halt their perfect start.

And Klopp was full of praise for Everton and especially their coach Carlo Ancelotti, who the Liverpool boss has a lot of time for.

“Top team, top manager. What I think about Carlo Ancelotti was never a secret,” Klopp told Premier League Productions (via Liverpoolfc.com). “I couldn’t respect him more as a person and as a coach. He’s a wonderful human being, to be honest.

“I knew from the first day when I heard that he will sign for Everton, I thought, ‘Ah, the next proper challenger in line.’

“Now I think they did perfect business in the summer. They found pretty much exactly the players they needed to improve an already pretty good football team.

“Together with being more used to what Carlo wants them to do makes them a pretty strong team.

“I’m really not surprised about the way they play.”