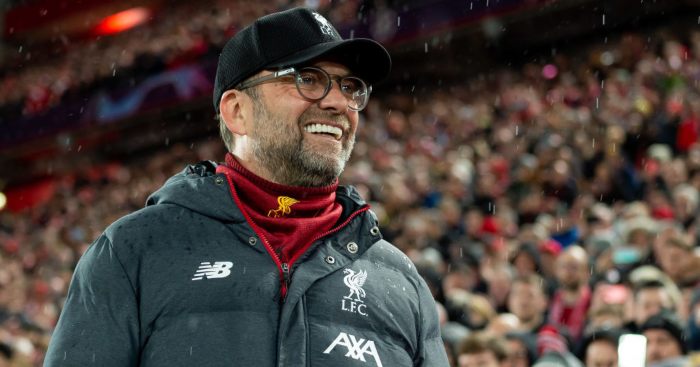 Jurgen Klopp insists he isn’t bothered if Liverpool win the Premier League at a neutral venue and he still isn’t convinced the club will have to play any matches at such venues.

The Premier League has confirmed it has “a neutral venue contingency” after it emerged that Man Utd were ‘perplexed’ at one of their games being chosen.

Premier League chief executive Richard Masters spoke out on the matter on Friday.

Masters anticipated a decision on neutral venues in the next seven to 10 days, and hoped the number would ultimately be “low” with the Premier League issuing a statement.

Liverpool, who are 25 points ahead of second-placed Manchester City, would fall into the high risk category with the potential for huge celebrations if they go on to lift the Premier League title.

“The stadium…we didn’t hear that yet, there’s some talk about it,” Klopp told beIN Sports. “I’m pretty sure we can resolve the situation here in Liverpool as well.

“If we would have stopped the league, if we’d done the silly null and void stuff, then it is clear we are already champions, we wanted to play anyway and now we are desperate to play because we want to become champions on the pitch.

Despite the potential that their title celebrations could be at a neutral venue, Klopp thinks it will be a great occasion whatever happens.

Klopp added:”Most of the people on this planet never have the chance in their life to be champions of the Premier League.

“For us it looks like we have a chance so we take it. Then there will be a moment in our life that we have the time and opportunity to celebrate together, then we will celebrate it in the right manner, whenever that will be.

“But we decide how much we enjoy it. In the moment, wherever it will be, in an empty stadium blah, blah, blah.

“With all the thoughts and prayers and love from all the people around the world it will still be an absolutely exceptional day in my life. Yes it’s not perfect but we’ve known for a while that it won’t be perfect so we’re used to that.

“We just want to have it, then we’ll see how it feels and I’m sure it will feel pretty good. Usually there’s a 50% chance that you don’t become champion in your own stadium anyway, so who cares?

“That’s really not too important, we just want to be together in that moment. ‘We will see how much close contact is allowed until then, we will use every inch of that, but only if it’s allowed.”