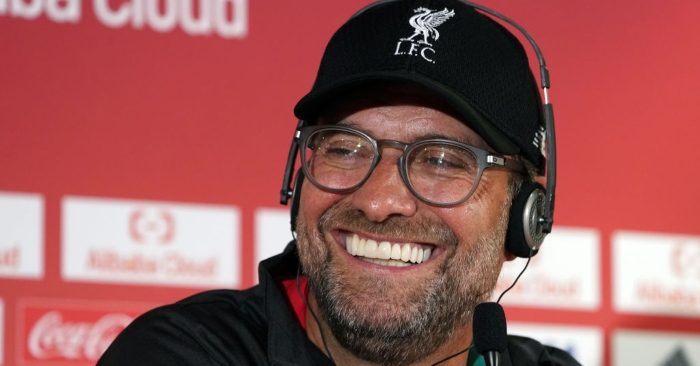 Vinny O’Connor kicked off the press conference, ahead of Sunday’s FA Cup fourth round on Sunday against Shrewsbury, but hesitated with his initial question.

“You know already it’s a sh*t question, but you ask it anyway…I like it,” said Klopp, much to the amusement of the news conference.

O’Connor then posed his question which referenced Liverpool’s impending title triumph as inevitable.

Klopp said: “The game last night is good example of our situation. It was never easy, it will never be easy, we just have to fight as much as we can. That’s the only thing we can do and are focused on.

“I’d never heard that word before in four-and-a-half years being here. It means it’s going to happen?

“We couldn’t care less about these things. We’re not qualified for the Champions League yet, we don’t yet have enough points to finish in the top four.”

The German boss, fresh from his Molineux press conference just 14 hours previous, was keen to make his Melwood appearance a brief one, but confirmed he will make changes against the League One side and said he “will have fresh legs” although the Reds boss is keen to maintain the winning momentum.

“Yes. We will have a team with fresh legs, players coming back or who have come back from injury. It makes sense to play them, they are pretty good. We want to go through.

” It’s clear without a winning mentality it’s difficult to win. I don’t think the players left a shadow of a doubt they want to win the game, no matter who the opponent is.”