Jurgen Klopp has been praising Mo Salah after recent superb performances, as he offers an injury update ahead of the Merseyside derby... 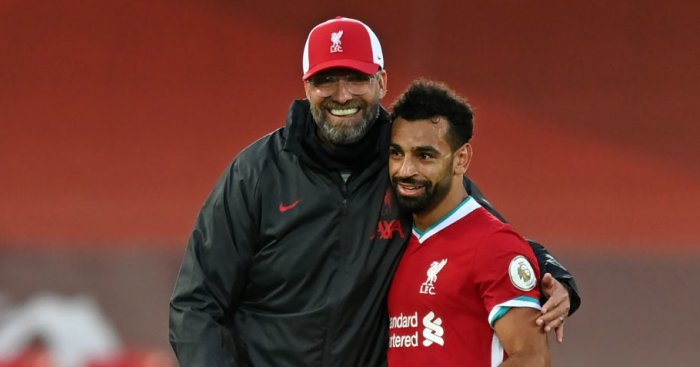 Liverpool boss Jurgen Klopp has been full of praise for Mo Salah after he has impressed for the Premier League champions so far this season.

The Egyptian international has made a great start to the new season for the Reds. He has five goals from just four league games.

Salah scored a hat-trick in their opening game of the season against Leeds United. He added a brace to his tally for the season in Liverpool’s shocking 7-2 loss to Aston Villa.

It has been an unsteady start to the campaign for Liverpool, especially after their surprising defeat to Villa.

But Salah’s form has been exemplary in the games so far. Since joining Liverpool, he has 78 goals and 28 assists from just 112 league games.

Speaking in his press conference on Friday, Klopp admitted that he has been ‘very impressed’ by Salah’s early season form:

“He scored twice vs Villa but he would like to score in other games when we win. Overall, he’s been really good so far. Complete. Involved, a proper option and still sharp finishing.”

“All these players are a mix of natural ability and work. Without practice, you have no chance. How I said, the skillset of Mo is outstanding but without his attitude, he would not be the player he is. So it’s a mix.”

Liverpool have been really unlucky of late with injuries and illness. Alex Oxlade-Chamberlain is out long term after suffering a knee injury during pre-season.

They will also be without Allison for several more weeks after he picked up a shoulder injury in training ahead of the Aston Villa game.

Merseyside has seen a big spike in COVID-19 cases of late. Liverpool have suffered from this, as Sadio Mane, Thiago and Naby Keita have all recently tested positive for the virus.

Klopp gave an update on the condition of these players and confirmed that everyone has returned from international duty unscathed. Liverpool face Everton in a huge Merseyside derby at Goodison Park on Saturday:

He added: “We all learn on a daily basis and they are all ready for 5 or 6 days in training. Of course, we assess that every day and we have specific measurements if they are more fatigued than normal so both Mane and Thiago look really good. We would never risk them. They’re ready.

“Naby is not ready, Oxlade is out long-term. But apart from that everyone came back healthy from the internationals.”