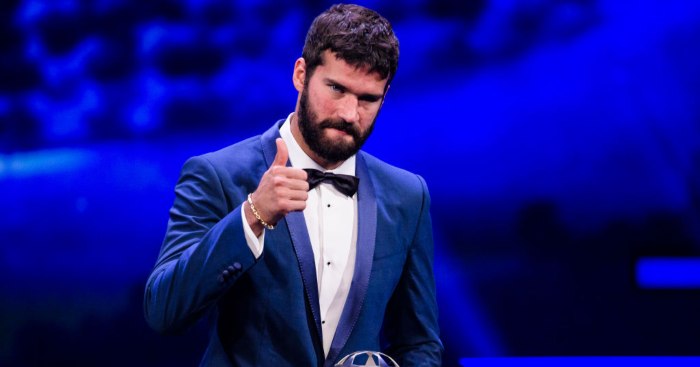 Alisson will line-up for Liverpool against Manchester United at the weekend on one condition, according to a report.

The Brazilian, who played a major role in the Reds’ success last term, injured his calf in Liverpool’s first Premier League game of the season against Norwich.

Alisson, recently named FIFA’s Goalkeeper of the Year, has missed 11 matches but the club are hopeful he could be fit to face arch-rivals United.

ESPN FC  recently claimed that ‘undertaking extra training sessions at Melwood’ as he pushes for a recall to Jurgen Klopp’s starting XI.

Former West Ham goalkeeper Adrian has deputised for Alisson in his absence, pulling off some great saves and conceding 12 goals in ten matches – but the 27-year-old is now set for a return.

The Daily Telegraph reports that Alisson ‘will be declared fit’ if ‘he completes another full week of training as is expected’.

The newspaper adds that the Liverpool goalkeeper ‘has stepped up his training schedule during the international break and is now deemed ready for his first team comeback.’