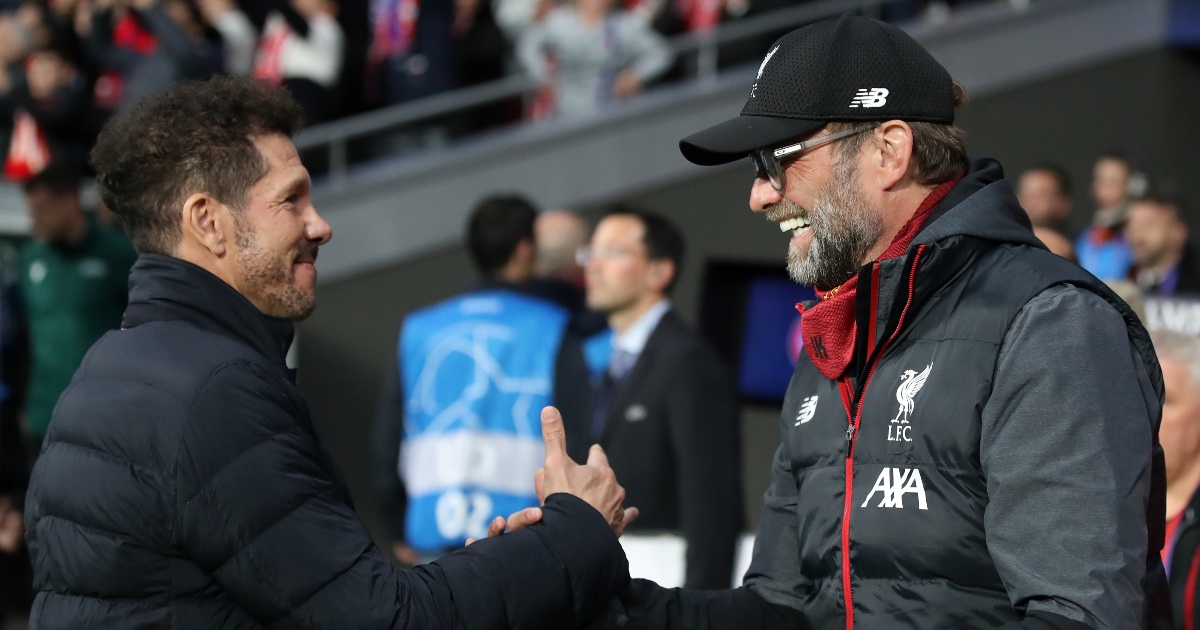 Jurgen Klopp has explained his outburst at Diego Simeone’s Atletico Madrid ahead of Liverpool’s Champions League clash with the La Liga side on Tuesday.

Klopp didn’t hold back in criticising the tactics used when Simeone’s side overcame Liverpool at Anfield in March 2020.

Having lost 3-2 in extra time, Klopp revealed his frustations after the game, saying: “I don’t understand, with the quality they have, the football they play.”

And the German boss has now attempted to explain his comments ahead of the two teams going head-to-head once more.

He said: “Look, first and foremost, I think I said this (criticism of Atletico) after the second leg.

“I was angry and disappointed about a lot of things.

“About life a little bit that things were going so wrong with the world at that moment [because of COVID-19] and that we had to concentrate on football in really strange circumstances.

“Of course, we played against a world-class team who defended with all they have. That was probably the reason I said the things that I said.”

Klopp insists he “couldn’t respect what they do more” but admits it’s a style he would never favour as a manager.

“He is the current Spanish champion, he’s been at Atletico for I don’t know, a long, long time and has been very successful there.

“He has a bunch of world-class players and keeps them on their toes. They fight with all they have for their lives and that says a lot about the quality of Diego.

“So I couldn’t respect what they do more. Do I like it? Not so much, but that is normal. I prefer a different kind of football, but that is just me.

“Other coaches prefer other styles of football and nobody has to like it, it just has to be successful and that’s what Atletico is for sure and that’s why they have changed.

“They brought in a new system, other players have come in and obviously during a tough time for football in Spain, they have done an impressive job.

“They have a proper team and look for me like the possible La Liga champions again. So what I said was for sure influenced by the mood I was in that specific day more than one-and-a-half years ago.

“They are different, they play a different system and have brought in some new players but they are still the result-machine they were before.

“They are a special team. It is incredible how Diego keeps them all on their toes, so I respect that a lot. There is no criticism from me.

“It is not only Atletico who play like they do but the problem is they have the best players and the best manager [for that style].

“So if you play Sevilla for example, it’s a similar atmosphere, a similar style, right and I really don’t want to use the other word, but it’s a proper, proper fight.

“The problem with Atletico is it’s a mix of the quality they have and the desire they show.

“Is it the style I would like to play? No, I couldn’t. I am not the person for it and I couldn’t ask for it but we are all different and that is completely fine.

“It’s not about for me to judge it or whatever. We have to face it and we will.

“We didn’t forget how bad we were there (in the first leg) and I am pretty sure Atletico Madrid have not forgotten how good we were at home.

“There is a way to cause them problems but you have to play a top-class game and if you don’t do that, they eat you. That is what we should avoid.”