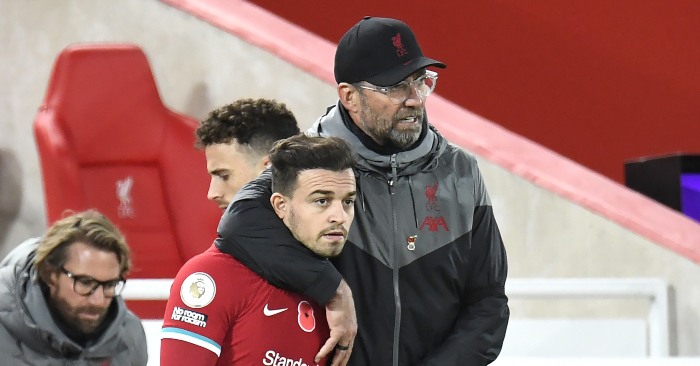 When Jurgen Klopp took over the Liverpool reins in October 2015, one of the first things he literally spelt out to his new players was the value of ‘T.E.A.M’.  It was the framework word that concertinaed into four specifics which the German viewed as non-negotiable for going into battle under his watch. The first and last letters are the most impactful in terms of looking at the powerful collective now.

T stood for ‘Terrible’; that is, terrible to play against, rather than the feeling you get in your gut after watching a repeat of Alberto Moreno’s Liverpool blowouts. The ‘M’ stood for mentally-strong machines. They were not ‘mentality monsters’ yet.

When the Reds fought past West Ham last month, they equalled their previous record of 63 unbeaten home league matches under Bob Paisley between 1978 and 1981. The sheer bloody-mindedness to get over the line, the over-my-dead-body syndrome or – as Fergie once labelled it – the ‘give up when you are dead’ attitude, has been something else. Liverpool have noticeably struggled to feel entirely at home in the last 12-plus months, going behind to West Ham (twice), and once to Bournemouth, Newcastle, Tottenham, Arsenal and Sheffield United. Yet they have hauled themselves out of the mire every single time with a victory. They have reached a point of belief that repels any given negative circumstances.

Liverpool will simply not relinquish their own castle to invaders, no matter how many arrows and casualties they sustain. When eventually the loss comes – as it will – one suspects they will go down like Macbeth: bloodied, embattled and raging. Think of the Atletico defeat: 100 minutes of one-way football savagery where the ramparts were undone by one goalkeeping howler.

Liverpool took 34 (THIRTY FOUR) shots against Atletico Madrid. 11 of those were on target. 3.52 xG.

A big reason Klopp got the job over Carlo Ancelotti was his mission to activate Anfield. This is Liverpool’s ace in the sky, a flying fortress that has carpet-bombed so many teams, but also carries a ground force that can outfight the opponents in hand-to-hand combat too.

During his tenure, Brendan Rodgers did his best to ratchet up the atmosphere by ensuring the red nets were restored to evoke memories of the glory days, while insisting the original 1974 ‘This is Anfield’ sign was put back up. There was also the SAS of course. But Klopp did not want the ‘backpack’ of history to burden him or his players. Anfield’s electricity was always latent; it is now powered up like the National Grid even without the roar of the Kop. That takes some doing, given the home discomforts that have affected so many since Project Restart.

CLICK HERE FOR ALL YOUR OFFICIAL LIVERPOOL FC MERCHANDISE

When Jose Mourinho maintained his unbeaten home record for the duration of his first spell at Chelsea, the Portuguese boasted: “Everybody knows Mourinho doesn’t lose at Stamford Bridge. My record is unbeatable. It is amazing – we were so strong for such a long time.”

Notice the me in TEAM.

When he was in his second stint at the Bridge, the tone had changed somewhat: “It’s difficult for us to play at home, because playing here is like playing in an empty stadium.”

Compare that to when Klopp’s charges beat Crystal Palace 4-0 in June with a sumptuous display a day before claiming the Premier League crown. The German was positively glowing.

“I don’t think the game could have been better because my boys played like everybody was in the stadium. The atmosphere on the pitch was incredible,” he said. It was a relentless quest to heat seek the ball.

Liverpool boast the best anger management in the league, their approach to setbacks infused by their manager’s handling of defeats. Atletico aside, where he was unnecessarily sour given Simeone’s grace, Klopp has rerouted the whole concept of ‘failure’, calling it ‘information’ to use next time.

It is interesting that they have only won one of their first four games away, following the mini-slump of three defeats towards the end of last season. This makes it even more imperative that home base is switched to red alert on every occasion. Only Burnley have managed to take a point from Anfield since Leicester contrived to survive some selective snow clearing by the ground-staff in January 2019 to take a 1-1 draw.

Of course, as fate would have it, it is top-of-the-table Leicester who now visit L4 almost 40 years after the Foxes put an end to Paisley’s unbeaten run in the old First Division. Can lightning really strike twice? There is a persuasive argument to suggest that this is the time for Rodgers to land his first blow on his successor with Liverpool nursing so many sick. Then you remember that Klopp is at his best when he’s been bloodied. As a 54-year-old Mike Tyson might say: “Everybody has a plan until they get punched in the mouth.”