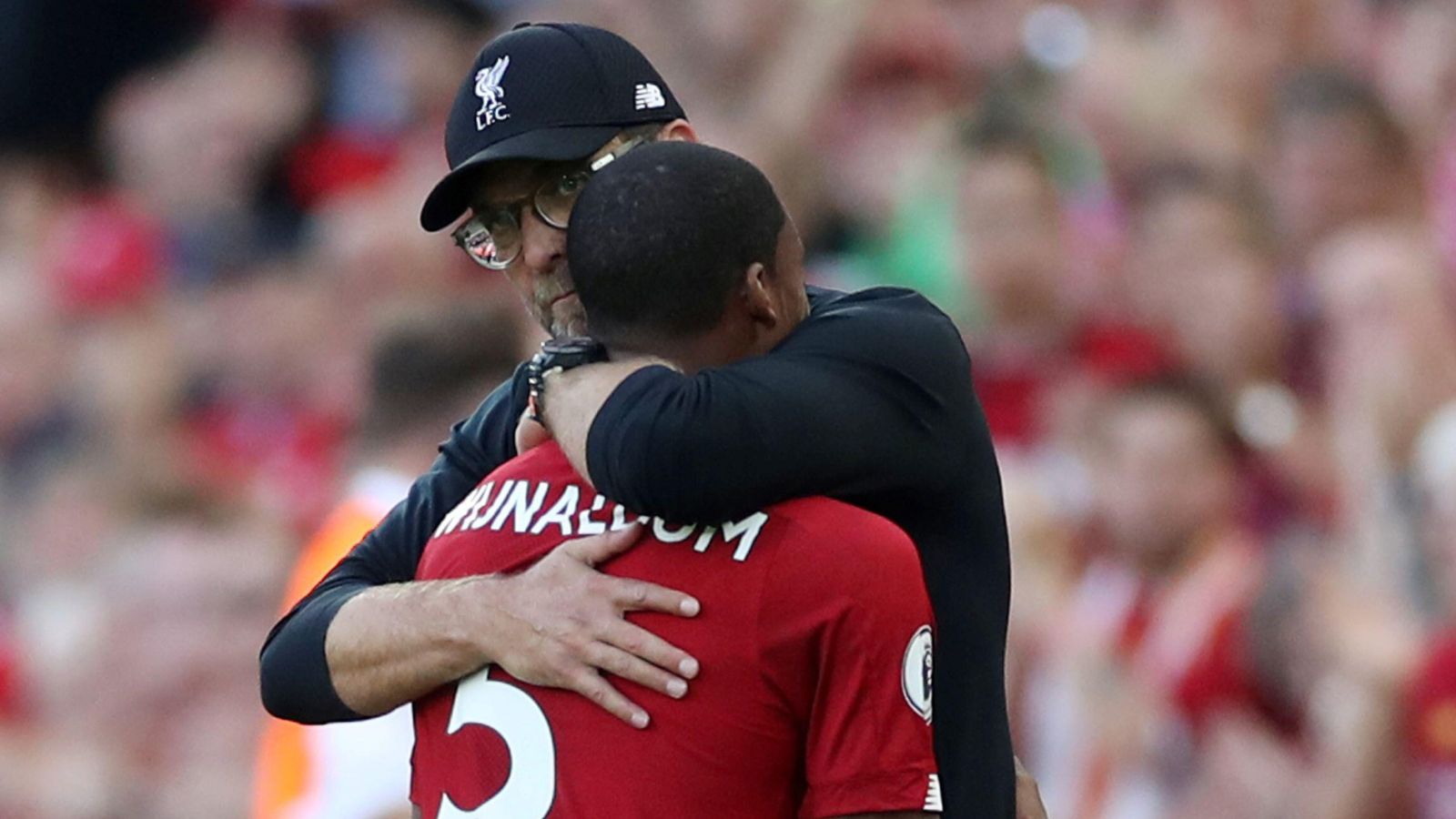 Liverpool boss Jurgen Klopp should never have replaced Georginio Wijnaldum with Thiago. Plus, things are feeling a bit Jose at Tottenham and lots more mails…

Liverpool’s lack of creativity
Matthew lays the blame for Liverpool’s issues on the lack of creativity from midfield but I’d argue it’s the opposite. In an attempt to make his midfield more creative Klopp has broken his team. The root of this stems from Wijnaldum leaving the club and effectively being replaced by Thiago.

Liverpool were at their best with Henderson, Wijnaldum, and Fabinho in midfield. These three players were not the creative force in the team, they were the work horses. They took care of all the dirty work a football team needs to do in order to dominate. This allowed Klopp to use his fullbacks as the main creative force, they could push forward creating chances and linking with the front 3 all whilst not having to worry about what’s behind them.

With Thiago that midfield doesn’t work as hard and with his propensity for possession and creativity the ball is spending much longer in midfield than before. Combine this with an ageing Henderson and a perpetually injured Fabinho and the creative attacking players no longer have the protection and industry behind. This wouldn’t be such an issue if Klopp had adjusted his tactics to suit but he hasn’t, they still play like the midfield is stacked with dogged powerhouses. Maybe Klopp simply doesn’t know how to play anything but full throttle football.

Matthew thinks Bellingham is the answer and the boy is that good that he’d probably solve any issue any team might have, but if Liverpool want to make the most of him Klopp would have to change their attacking focus. I think they’d be better off buying a few tireless box to box players like Haidara and McGinn which would allow Trent and Robbo the freedom they previously enjoyed.
Dave G

Antoni-oh
Ever since Conte joined spurs, F365 has said that he was too good for us. You were right. He was.

The turnaround during last season was immense. We had absolutely no right to finish fourth and Conte made the seemingly impossible happen.

Conte gave the players belief and a structure where they could thrive after the horror show that was Nuno Espírito Santo. A ‘limited’ squad given a shot in the arm with a world class manager and two genuine season changing signings in Bentancur and Kulusevski. The confidence was sky high and the performances reflected it. We ended the season playing genuinely impressive and exciting football.

Levy then got his chequebook out, and if Spurs didn’t ‘win’ the transfer window, we were top 4. All signs pointed to an exciting season.

But the magic has gone. The feel good factor dissipated. Both on the pitch and in the stands.

Is Conte just a pragmatic coach who excels only when he has multiple world class players who can muster something out of nothing? It all feels a bit… José.

We are playing boring football. It’s also all very obvious.

Spurs for the most part play horizontal football. Crisp and quick breaking of lines are hardly ever seen, quick transitions from defence to midfield to attack are rarer still. Spurs are clearly dangerous on the counter, but those clear opportunities don’t come around too often against the big teams, especially when your midfield constantly play with their backs to goal. If Harry Kane isn’t feeding in Son, no one is.

The point of all of this is that Spurs weren’t beaten by Newcastle because they had worse players. They were beaten because they had a worse system. It’s a system that concedes possession and territory which in turn invites pressure, and that’s when mistakes are made.

Yes, they’re individual errors, but the system requires near perfection for it to work. Spurs have to constantly counter the opposition press to win a game of football which just isn’t sustainable for this group of players (seeing the fear in Davidson Sanchez’s eyes every time a slow ball is passed to him is painful to watch).

So yeah, Conte is right. Better players will be better able to cope with the requirements of Conte-ball (basically being press resistant for 90 mins). But how about playing front-foot football where we hold the ball 20/30 yards higher up the pitch? How about finding a style that suits the current playing squad? How about taking the game to the opposition instead of defending for 70% of the match?

If Conte is better than Spurs, then this team beats Newcastle. His threats to leave are beginning to carry less and less weight, especially with Poch waiting in the wings.

Jadon Sancho
Was interested Addy, Brisbane’s missive about Sancho’s age not being an excuse – citing Haaland and Jota as examples of young enough and good enough players.

It’s just a bit silly though isn’t it. Plenty of players take a bit longer to come good. Jamie Vardy famously didn’t go pro until he was 25! That’s an extreme example, but if you get to cite Erling Haaland of what to expect from a 22 year old…

The other contrast between Sancho and Haaland or Jota is that they were dropped into excellent teams and systems vying for league titles and European honours. And arguable, United were operating at a level just a smidge lower than City and Liverpool for the bulk of Sancho’s time at the club… shocking admission, I know. To expect the same from Sancho in a team thst is only just (fingers crossed) starting to get its act together is unrealistic.

So, in summary, I think you’re being a bit unfair. Though he was rubbish on Saturday!

Finally, I laughed when I read your “end of the season” ultimatum. What happens if he doesn’t hit your standards then? He stays at United and keeps trying because he cost them £75m and £350k a week in wages, that’s what happens.
Andy (MUFC)

Leaders at Man Utd
One thing that has not been touched on with Utd is the difference in the leaders on the pitch compared to last few seasons. Martinez, Varane at the back, Eriksen, Casimero and Bruno further up the field. Even Lindelof, De Gea and Dalot are stepping up as well. Good teams always have leaders all over the pitch and when you are up against it push you that bit harder. Of course having a manager who doesn’t take any sh*t also helps.Small steps so far, been a few setbacks (Brentford, City) but they have reacted well both times. A young hungry goal scorer is next priority.
Ken, Cork, Ireland

Johnny Nic’s piece
I agree with John Nicholson, in the sense that the behaviour of managers, such as Klopp recently, is of course wrong.

However, just a few points; firstly comparing a man shouting at another man and domestic violence is a pretty low bar for yourself. There was no comparison, there is no comparison. Sure, Klopp lost his cool, has been rightly punished, and rightly apologised – if a little tamely. He didn’t assault his partner. His partner doesn’t live in a constant state of terror, confusion and fear because Klopp lost his cool. To compare them is ridiculous, and you’re wrong for doing so.

Secondly, Moyes is also wrong to defend the abuse. But to suggest that media (and others) wouldn’t question complete passion less behaviour on the touchline is also absurd. I have seen that very thing with managers, where their silence, their sitting, their stoney face are all used to ridicule. Everything, and I mean everything, a manager does or doesn’t do is used as a stick to beat them with – on social media – but also in the regular media just as often.

And here’s the bottomline, and where I agree with the thesis of your article; men’s football is a toxic sport. Everything about it is toxic, from the very nature of the sport thinking it is a better, more important, more legitimate sport than other sports. The constant media coverage, the constant berating and criticism of everything that does or doesn’t happen. The abuse from fans where death is seen as a banter subject, someones race and sexual orientation are just part of getting in their heads. Managers behaviour towards refs is a symptom, for sure, but it is not the cause of the abuse. That is systemic in every facet of the beautiful game.

So yeah, men’s football is toxic and abhorrent at times, but don’t compare Klopps behaviour to domestic assault. It is not the same.
Neill, Ireland

The draw was coming – we’ve scraped by with a couple of 1-0s recently and in order to beat PSV, Gabriel Jesus was called into action.

Given the way we play, the team was inevitably tired – but there’s no real cause for concern. Our five dropped points were caused by going for it against United and not having quite enough in the tank to get past Southampton.

And some of our nearest rivals are now further back – obviously not City but they’re going to win the league – so no need to panic yet.

How is nobody talking about Rob Jones after Southampton vs Arsenal? Honestly, I haven’t seen such an obvious penalty for Arsenal denied since… oh! Since Rob Jones denied us a penalty against Villa this season when Mings triple-suplexed Saka in the box. To be clear, I am not a believer of an anti-Arsenal conspiracy. However, this is a huge fxxxing deal that seems to be swept under the rug because Arsenal weren’t at their best. The first half performance was good. The second, not so good. Also, Southampton were much improved in the second half and scored a great goal. But, come on, that Rob Jones was an absolute Trussterfxxk and it’s two consecutive Arsenal games he’s reffed where he’s decided to be a cxxt. And, of course, the VAR team were probably having a good laugh about it, too. Arsenal should have been better on the day so that it wouldn’t have made a difference (like against Villa), but, don’t tell me the shit Rob Jones didn’t play a part in Arsenal not getting all three points.
Simon, Norf London Gooner