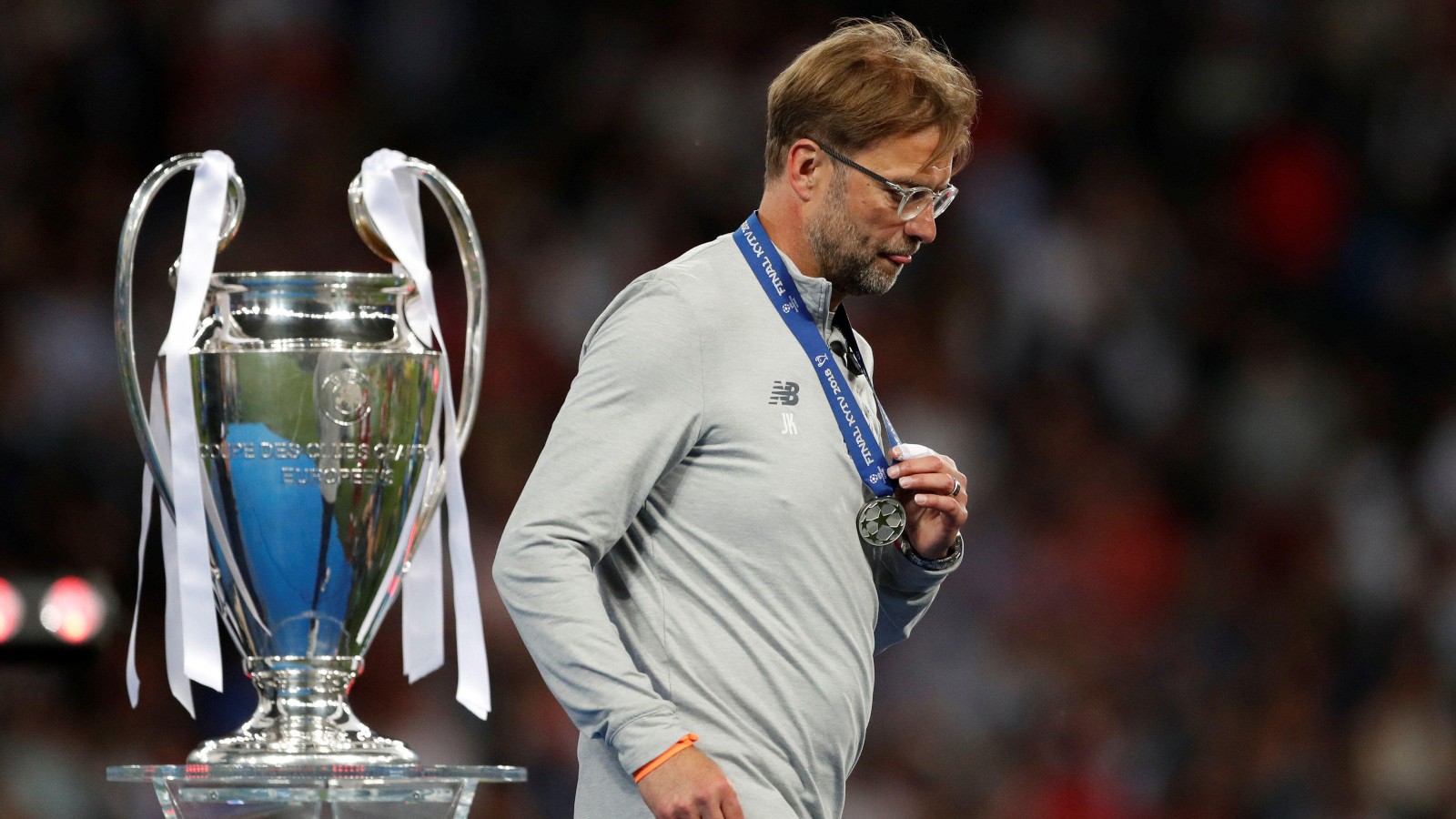 Jurgen Klopp used to be the eternal bridesmaid in finals. The German is slowly removing that unwanted tag but Liverpool fans must be prepared to suffer on Saturday evening. The Reds never do it the easy way.

1) 2016 League Cup: Liverpool 1 Manchester City 1 (Man City won 3-1 on penalties)
Having scrambled past Mark Hughes’s Stoke on penalties in the semi-final, Klopp led out the Reds in a suit. Klopp doesn’t like suits and there wasn’t much smartness about his team’s performance. Daniel Sturridge was anonymous, Lucas played centre-back and Simon Mignolet let a Fernandinho shot through his legs. Ho-hum. Phil Coutinho grabbed an equaliser with just seven minutes to go and the legend that is Divock Origi almost nicked it in extra time. The real hero was Willy Caballero, saving from Coutinho, Adam Lallana and Lucas in the subsequent shootout as Liverpool fell short.

2) 2016 Europa League: Liverpool 1 Sevilla 3
When Dejan Lovren landed on his considerable derriere in celebration of a last-gasp comeback clincher against Dortmund in the quarter-finals, Klopp kicked off his first chapter of Famous European Nights At Anfield. The only problem was that Unai Emery’s Sevilla, four times winners of the competition in the previous ten years, were waiting in the end game. Liverpool played well in the first half with Sturridge netting an outrageous outside-of-the-foot job. The Reds also had two legitimate penalty shouts waved away. Unfortunately, Alberto Moreno forgot to switch the lights on for the second half as Sevilla took over the gaff in Basle as Liverpool imploded. The German admitted they “lost faith” after the equaliser. Not quite the believers yet.

3) 2018 Champions League final: Real Madrid 3 Liverpool 1
By the time the squad arrived in Kyiv, resources were literally down to the premium first XI and a few broken goods on the bench. Liverpool went hell for leather in the first 20 minutes as they smashed into Los Blancos with fury. Madrid blocked absolutely everything to quell the revs of the Sadio Mane, Roberto Firmino and Mo Salah express train before Sergio Ramos took the bloody door hinges off the Egyptian. From that moment, something in the team died. The electric Mane did well to pull it back to 1-1 after Loris Karius chucked one onto Karim Benzema’s boot for the opener. Unfortunately, the keeper was damaged goods when he was Ramosed earlier. Gareth Bale’s worldie was followed by the wobbliest pair of hands ever, a flood of tears and very few consoling teammates.

Concussion or not, the Reds were not ready for the big prize. Reinforcements were needed. Forty-eight hours later, Fabinho was signed. The rest is history.

4) 2019 Champions League final: Liverpool 2 Tottenham 0
The sensational side of Liverpool’s first trophy in seven years was achieved in the semi-final after being three down to Barcelona. When Liverpool and Tottenham, who had performed their own Houdini act against Ajax, turned up to the Wanda Metropolitano after an agonising three-week wait, both sides looked shot by the nerves and heat. The Reds went ahead with an early penalty converted by Salah as Moussa Sissoko did a Saturday Night Fever improv with the ball in the box. Origi spent his entire cameo misplacing passes until he found the perfect finish with three minutes remaining to secure number six. The Reds had learnt how to win big. Just.

5) 2019 European Super Cup: Liverpool 2 Chelsea 2 (Liverpool win 5-4 on penalties)
After the magical number six in Madrid, it was a return to Istanbul for Liverpool to meet Frank Lampard’s new economically-challenged Chelsea. The Blues looked likely winners as Olivier Giroud netted and Christian Pulisic, for once, finished an absolute beauty only to have it chalked off. Liverpool started to play when Firmino came on to join the dots and Mane doubled his money to put the Reds on course for a first Super Cup since 2005. Klopp had only just signed free agent Adrian, who had been training alone in the Spanish sixth tier, the week before as a replacement for the departing Mignolet. He was thrown straight into the bearpit with Alisson pulling up lame in the first league game of the season. Somehow Tammy Abraham missed a chance for the winner and it was the unfortunate striker who missed the 10th penalty as Adrian had his greatest moment as a Liverpool keeper. Atletico at Anfield 2020 rather redefined his legacy thereafter.

All three of Liverpool's goalkeepers have beaten Chelsea in a penalty shootout 🧤 pic.twitter.com/ogESn59GB6

6) 2019 World Club Championship: Liverpool 1 Flamengo 0
The Reds decided to throw all their chips on the table for a trophy that had eluded them twice in the glory days of the ’80s, then again in 2005. Some things are still overlooked. Jordan Henderson played centre-back when Virgil van Dijk pulled out of their semi-final with Monterrey and the final was another 90 minutes of deadlock before Firmino did the ultimate Ronaldo-style muscle ripple having twisted the Flamengo defence inside out. The new world champions then turned up at the King Power on Boxing Day to obliterate their nearest challengers as if to say: “Do you know who we are?” These were the days for Liverpool fans.

7) 2022 League Cup: Liverpool 0 Chelsea 0 (Liverpool win 11-10 on penalties)
Liverpool had not won their old ’80s mate, the League Cup, for a decade when they strode out at Wembley in February. Pulisic, misser of great chances™ spurned a huge opportunity in the early minutes. Liverpool blew a sitter themselves when Mane’s shot was somehow turned over by Ed Mendy. Again, Liverpool’s normally fluid attack failed to fire. Salah was through but fluffed his lines. Joel Matip ‘scored’ but the goal was disallowed after a bit of Van Dijk skulduggery on Reece James. Chelsea had three goals ruled out themselves, playing on Liverpool’s courageously high, high line. This was a ridiculous 0-0 destined to be decided by two sides’ worth of spot-kicks. Kepa tried to psyche out Van Dijk and Salah, much to their disdain. Caoimhin Kelleher didn’t look like saving one either, so Chelsea’s sub keeper decided to end the agony of 21 perfect kicks by blasting one over.

8) 2022 FA Cup: Liverpool 0 Chelsea 0 (Liverpool won 5-4 on penalties)
No goals in 240 minutes of finals between Liverpool and Chelsea is one of the most extraordinary stats of the season. Yet this wasn’t “shit on a stick” fare, a phrase former Real Madrid great Jorge Valdano used to describe those austere encounters between Jose and Rafa’s Champions League chess pieces in the 2000s. Luis Diaz should have scored early as the Anfield club poured forward with everything but the goal. The Colombian spent the whole game shooting, twisting, turning and thumping the floor, having somehow not found the target while Pulisic (him again) and Marcos Alonso spurned huge chances. Salah crumpled on the floor and got taken off and, surprise, surprise, it came down to pens. Mendy saved Mane’s matchpoint as Thomas Tuchel thumped the ground in premature celebration. Alisson then stuck out a colossal hand to increase Mason Mount’s Wembley woes, which gave adopted Scouser Kostas Tsimikas the chance to land the full set for Herr Klopp. Now can Liverpool win one of these pots with something to spare?