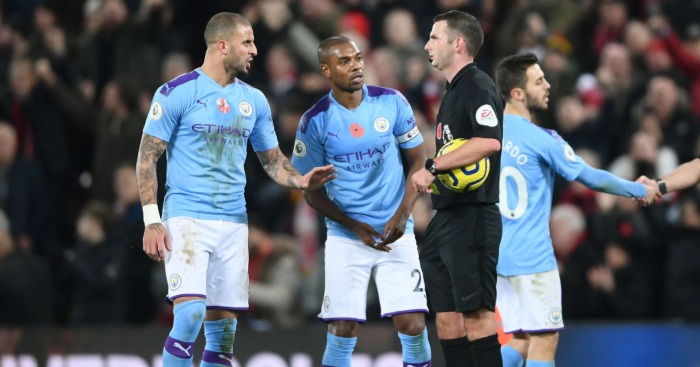 Former Liverpool striker John Aldridge has slammed Manchester City’s stars, accusing them of “behaving like spoilt kids” in their 3-1 loss to The Reds at Anfield.

Tempers flared in the latter stages as Raheem Sterling and Joe Gomez clashed, which carried over into England training, while Pep Guardiola was unhappy that key decisions didn’t go City’s way.

Aldridge has taken a swipe at Guardiola’s side and accused them of being sore losers.

He wrote in his Liverpool Echo column : “I think Manchester City are so used to getting their own way most of the time that they don’t know how to react when things go against them and they behaved like spoilt kids really.

“I understand their frustrations on the touchline because I’ve been there myself but the way Guardiola and [Mikel] Arteta were carrying on, as well as Sterling and [Kyle] Walker, it was like watching dummies being thrown out of the pram.

“No-one likes getting beaten but there’s a way to win and a way to lose and, particularly with the eyes of the world on Anfield for a match of this magnitude, City really didn’t do themselves any favours.”

Guardiola was furious after two VAR decisions went against his side and was caught on camera saying “thank you so much” to referee Michael Oliver after the game.

The Spaniard insisted afterwards that he had not been sarcastic when thanking Oliver.

Fabinho’s early goal for Liverpool came seconds after Oliver had waved away City’s appeals for a penalty for an alleged handball by Trent Alexander-Arnold.

VAR backed Oliver’s decision and Guardiola was further incensed when another handball incident also went in favour of the home side.