Home Mediawatch Liverpool to lose Henderson and Klopp over deal? 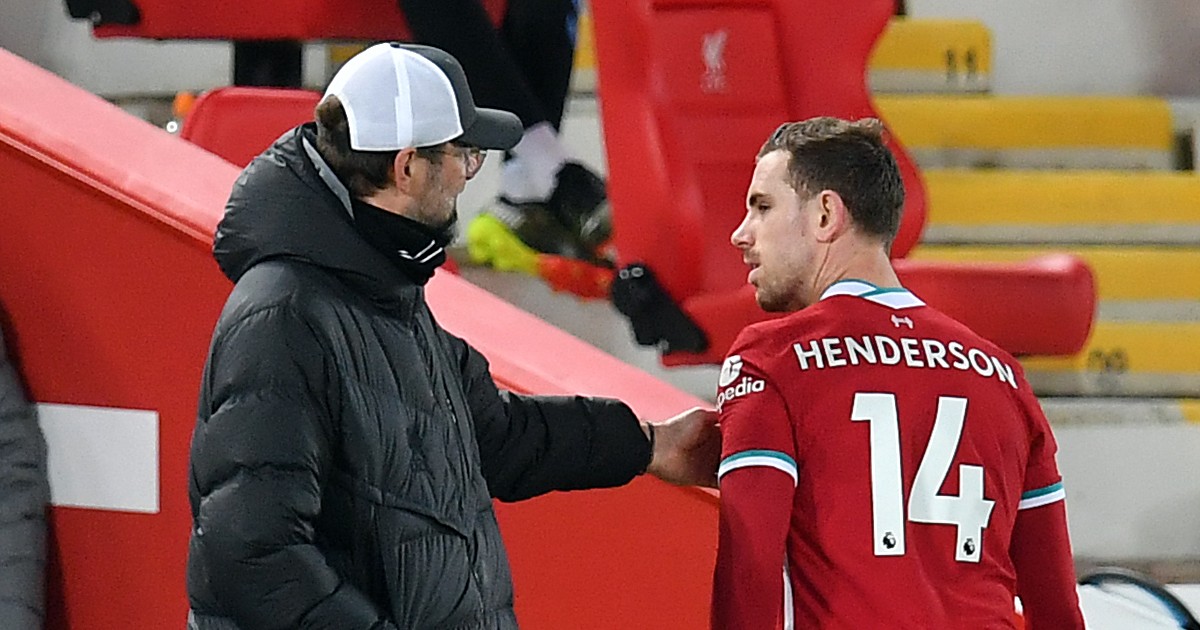 Jordan Henderson has two years left on his Liverpool deal but Jurgen Klopp might leave. Are you sure?

Mediawatch is a daily column on midweek days. You can read more here…

Plunge Pool
‘For long-serving Liverpool captain Jordan Henderson, the future is far from certain. The Athletic understands that while talks over an extension have taken place during this off-season period, no real progress has been made’ – The Athletic, July 19.

‘JORDAN HENDERSON’S Liverpool future has been plunged into doubt after contract talks stalled’ – The Sun.

Can you be ‘plunged’ (‘jump or dive quickly and energetically’) into anything when the last real progress on the contract was before Euro 2020 and the actual contract does not expire for two more years? It sounds like nothing ‘energetic’ is happening at all. But The Sun got themselves a back page about the astounding news that Henderson might leave – but probably won’t, because we all remember James Milner – the club at the age of 33.

Hend Game
The big splash is on the back page of the Daily Mirror, who go for a ludicrous headline of ‘NERVE HENDS’. At this point we would like to remind you that Henderson is one of many Liverpool players whose contract expires in two years’ time – Virgil van Dijk, Sadio Mane, Mo Salah, Roberto Firmino, Fabinho and Naby Keita among them – and he is by no means the most important player on that particular list.

You can use all the capital letters you want, but Henderson will not be leaving Liverpool THIS summer or NEXT summer unless Liverpool agree to sell, and to suggest otherwise is wilfully misleading journalism.

Is it really ‘an issue that impacts the authority of boss Jurgen Klopp’ if the club wait before agreeing a contract with a 31-year-old player who has not kicked a ball for them since February?

Apparently it really is because David Maddock ekes out hundreds of words on the subject on the inside pages, in which he once again passes on threats from the Henderson camp.

‘If they do not deliver the security he craves, he will talk to clubs who will.’

‘Should they allow Henderson to leave then it will put Klopp in a potentially difficult decision and his own future at Anfield could possibly be in doubt.’

Get the feeling that somebody is spiralling? Are we really expected to believe that Klopp might leave Liverpool if they do not offer a new long-term contract to a 31-year-old who still has two more years on his current deal? If he does, then he is an idiot.

‘As the backlash over the doomed Super League moves proved, when Klopp voiced his dissent, that is not a situation Liverpool fans would stand for.’

‘Voiced his dissent’? Ah, so we are back in that place where we are all pretending that Klopp ‘came out fighting’.

It’s worth remembering what he actually said back then:

“I am here as a football manager. I will do that as long as people let me do that.

Does that sound like a man who will quit Liverpool if Henderson is not offered a new contract until next year?

Hend of the road
Is everybody losing their minds? Stan Collymore writes elsewhere in the Daily Mirror that ‘JORDAN HENDERSON must be given a new deal at Liverpool and it should include a coaching role so he can make the transition into management’.

It’s not known whether Henderson wants to be a coach or has any aptitude but that’s immaterial to Collymore, because by the end of his column he has Henderson (31, no management experience) pipping Steven Gerrard (41, title winner as a manager) to the Liverpool job.

Nice to see all perspective has not been lost.

The Greal deal
The bulk of Collymore’s column actually focuses on Jack Grealish and he asks – with presumably straight face – ‘Why go to City?’.

Well, for an answer, let’s go back to what Collymore himself said when he chose to join Liverpool in 1995:

“I didn’t want to look back at my career and say I hadn’t achieved as much as I might have done. That’s one of the reasons I came here. I want to win things and I do believe I can do that sooner rather than later with Liverpool.”

That backfired. But now he believes that Grealish should stay at his beloved Villa because he might get the club back into Europe. Be happy with your lot, Jack.

‘He would play only a fraction of the 70 games a season City can chalk up, as for instance happened to Riyad Mahrez after he joined from Leicester.’

🇩🇿 #OnThisDay in 2019, @Mahrez22 won the Africa Cup of Nations – his FIFTH trophy of the season:

General Custis
On the inside pages of The Sun, Neil Custis talks us through the situation at Manchester United. Obviously, high on his agenda is Paul Pogba. He always is. It’s almost three years since he declared the ‘beginning of the end’ for the Frenchman at the club.

But this time, Pogba is not only responsible for his own form but that of Bruno Fernandes.

‘His future is very much linked with whether Pogba commits to staying. If he does then Fernandes will be focused again.’

Odd how Fernandes was also utterly rotten at the Euros. Was that why he was dropped for the game against France? Just too damned distracted by the presence of Pogba?

But the good news for the racially abused Rashford and new signing Jadon Sancho is that ‘Solskjaer is a very good man-manager and when they have enjoyed their holidays he will make sure there are no lasting effects’.

Never mind being a middling Manchester United manager, Solskjaer should have a much higher calling if he can eliminate the long-term effects of racist abuse with merely an arm around the shoulder.