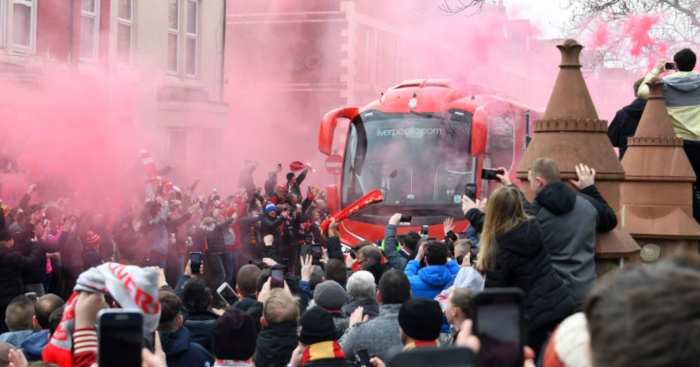 Liverpool have pledged to ban any fan found to have thrown a flare into the away end during Sunday’s 2-0 victory against Chelsea.

The club have also condemned an “offensive” chant sung by their fans about the Stamford Bridge side.

Merseyside Police are investigating the flare incident, which resulted in a nine-year-old boy receiving medical treatment.

“Liverpool Football Club would like to thank the players, staff, officials and supporters of Chelsea for their compassionate marking of the Hillsborough anniversary during our fixture at the weekend,” said a club spokesman.

“As ever, the overwhelming majority of those present at Anfield ensured the occasion was a fitting tribute.

“Regrettably, however, a smoke device was thrown into the away section during the second half and we are actively working with Merseyside Police to investigate the matter.

“Any person found to have committed this offence will be banned from our ground.

“The club is also concerned about a chant from some of our fans, specifically referencing Chelsea, as inappropriate and offensive.

“We would urge all Liverpool supporters to respect each other and stop such chants as they do not reflect the inclusivity that the club stands for.

“As a proud member of Stonewall’s Diversity Champions programme, we are committed to LGBT equality across all areas of the club and have contacted them and our own affiliated LBGT group Kop Outs for further support.”

Chelsea welcomed Liverpool’s stance. A statement on the Blues’ website read: “Chelsea football club is extremely concerned a flare was thrown into the section of the stadium housing our supporters during our match at Anfield on Sunday.

“We therefore welcome Liverpool Football Club’s statement on the matter and their commitment to work alongside Merseyside Police in investigating it.

“We also welcome Liverpool FC’s acknowledgement of homophobic chants from home supporters at the game and their commitment to rid such sentiment from their stadium.”