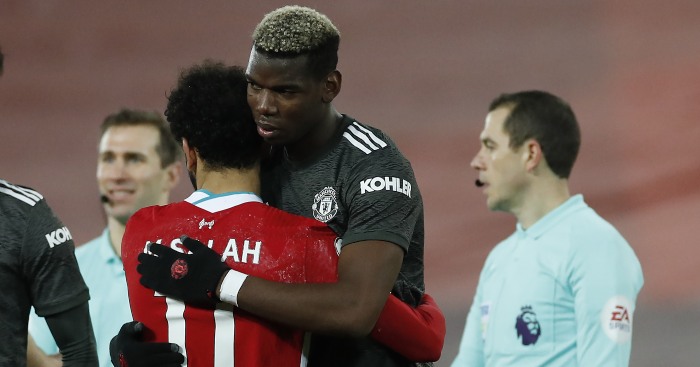 Yes, blame for Manchester United’s failure to end Liverpool’s ridiculous unbeaten home record lies entirely at the feet of one Paul Pogba, who ‘fluffed a golden opportunity to grab Manchester United glory at the champions’.

That is not even close to being a gilt-edged chance; both our eyes and xG tell us that Bruno Fernandes missed an easier opportunity to score. And yet it is PAUL YOUR FAULT, you louche Frenchman with your dancing and your hair and your insistence on being really rather good at the moment.

If it truly were Paul/all his fault, you might think that Custis’ Sun colleague Dave Kidd would mention the chance a little earlier than the 41st paragraph of his 44-paragraph match report.

Enemy lines
Still, Kidd and Custis are not really on the same page about anything at all about Manchester United. Literally, actually, as one is on p48-49 and the other is on p50-51 of The Sun.

Kidd: ‘So it turns out that nice guys can park buses too. And Ole Gunnar Solskjaer is morphing into Jose Mourinho with a boyish grin.’

Custis: ‘Why was the onus on United to throw caution to the wind and go for it at the home of their greatest rivals?’

Kidd: ‘This (Liverpool) is nothing like the remorseless winning machine we have witnessed in the previous two seasons.’

Custis: ‘This is a Liverpool team unbeaten here at Anfield since April 2017. They won the league with 99 points last season, came second with 97 in 2018-19 and won the Champions League that term.’

Kidd: ‘And a Liverpool team with two midfielders at the centre of a prefab defence.’

Custis: ‘Listen to the pre-match build-up and you would think United were facing Liverpool’s Under-10s in defence.’

Kidd: ‘Only Manchester City will have taken any genuine joy from this. Pep Guardiola’s men are now in second, with a game in hand – and odds-on favourites to recapture the crown.’

Custis: ‘Have no doubts, United showed their title credentials in toughing it out.’

United? Not at The Sun.

Take a chance on me
The theme of Dave Kidd’s Anfield match report is the awfulness of the match. He writes: ‘Here was pandemic football at its grim worst as the most eagerly-anticipated match of the season died on its backside.’

But no clicks can be baited with such misery and realism so what’s the online Sun headline for his report?

And here’s the sum total of Kidd’s words on those ‘golden chances’ – in the final four paragraphs of his report:

‘Finally after 75 minutes a genuine save, Rashford slipping in Shaw who cut back for Fernandes, whose shot was blocked by Allison’s feet…then Aaron Wan-Bissaka drove forward and fed Pogba, whose shot was clawed away by Allison.’

HOW DID THEY MISS SUCH GOLDEN CHANCES?

Here’s an idea: Let’s not pretend that football can never be a bit shit.

Forget me not
The back page of the Daily Mail does not blame Paul Pogba for that shit football match but it is equally questionable.

Except he really, really doesn’t. What he does say is that “in the season we came second with 97 points, I only started thinking about the title when it was clear we were in the Champions League”.

That’s a fairly dull anecdote, not a warning. And it’s absolutely not the white flag that the Mail would have us believe as they search for a back-page lead after a pretty terrible game.

The Rivals
The Mirror website will of course milk this damp squib of a game for all its worth (and more). A sample headline:

First question: Who is Salah’s Man Utd rival? Is it Bruno Fernandes? After all, he is only two goals behind on the Premier League top scorers list.

Nope. It turns out that his ‘Man Utd rival’ is left-back Luke Shaw. We would have gone for ‘opponent’ but obviously that would not have been anywhere near vague enough for the kings of click.

And is he ‘scared’? Well, he was “scared to take on Luke Shaw”, according to Daily Mail columnist Chris Sutton, which is absolutely enough to prompt that bombastic headline in 2021.

No Fear
Headline on Goal: ”Salah might want Real Madrid or Barcelona on his CV’ – Carragher fears £100m move for Liverpool star.’

Actual quote from Jamie Carragher: “Those two clubs are not flush with money and his contract still has some time to run at Liverpool. So I’m not fearful as a Liverpool fan that he is going to leave any time soon.”

Literally exactly the opposite. But still…enjoy those delicious clicks.

Gross indecency
Talking of Mo Salah, perhaps Jamie Carragher is not fearful because the Egyptian is now rubbish. Ian Ladyman of the Daily Mail starts his Monday piece about Salah by citing the consistency of Lionel Messi and Cristiano Ronaldo over a decade and saying that ‘Mo Salah is now discovering how difficult that is to do’. Because obviously he would not have known before.

Comparing anyone to the two finest footballers of this century is in itself ridiculous; it’s a ludicrously high bar that everyone fails to clear.

But describing this season’s haul of 13 goals from 17 Premier League games as a ‘decent return’ is contemptible. Literally two players have scored more goals in Europe’s elite leagues this season. It’s going okay.