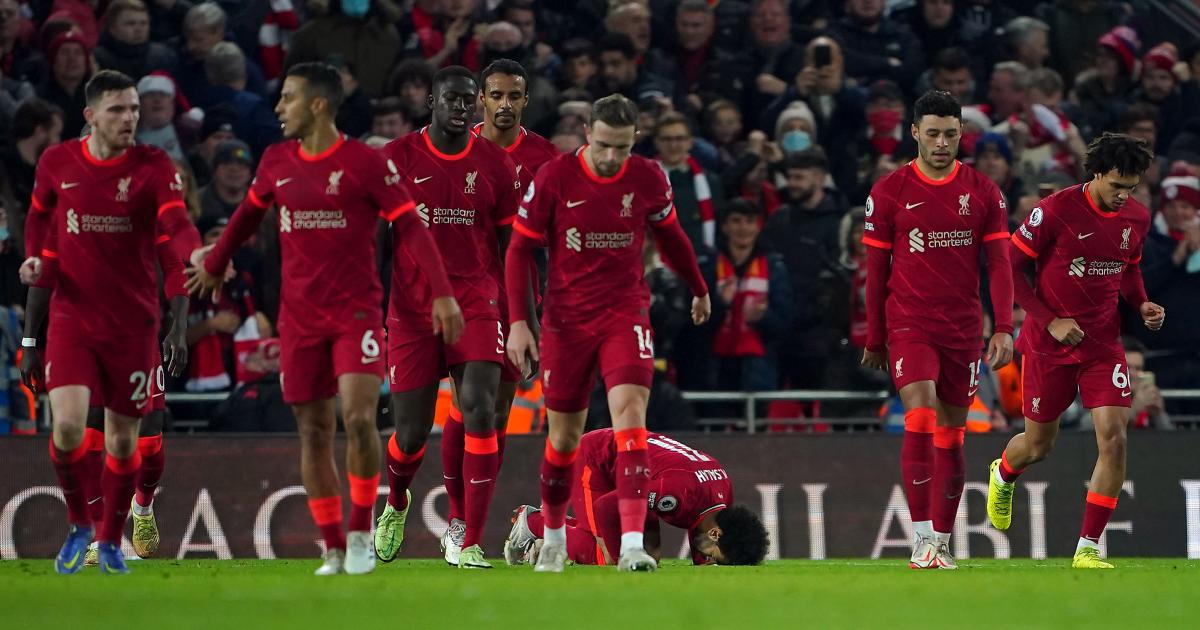 Leave Arsenal alone
It’s amazing isn’t how Arsenal pop back into the top 4 by virtue of other teams not playing games and all of a sudden we are back in the firing line!

Andrew, Barnet it’s lovely you’ve judged this Arsenal team’s ethics on one game because believe me that hounding the ref and exaggerating the foul has been non existent this season. If refs (mainly just one ref actually, hi Mike Dean) actually gave us anything for say McArthur volleying Saka 2 mins after the ball was gone or say Godfrey stamping on Tomi’s head or some other Everton mook trying to break ankles in that Everton game then maybe the players wouldn’t need to ham it up and low and behold the moment we do we get awarded things. Don’t hassle the ref and he let’s players stamp on our players heads, do hassle the ref and he gives correct decisions. Go figure. It does all feel very cliche bad guy origin story though…..they made us do it……..!

Next Rob, it wasn’t getting the ball and then taking the man out was it buddy? It was clipping about 15% of the top of the ball then following straight through into Laca’s leg. If Coufal actually makes decent contact with the ball, clears it and then takes out Laca of course it’s a great tackle but essentially missing the ball, booting laca and clearing the ball with the foot underneath you is a foul. Ask Moyes, he agreed with the decision.

Finally Roode, let’s keep it simple if an email starts with ‘Arteta won the most important battle in history.’ then the writer very firmly has his tongue in his cheek so probably best you save us all the time and effort of having to read your nonsense and stellar joke about chumps league music on vinyl.

Can we just go back to Arsenal not being important enough for anyone to notice, twas a much nicer place to be so we can just enjoy our lovely home form, horrendous away form, exciting youngsters over and under performing and a manager who makes mistakes but seems to occasionally learn from them. We don’t mean anyone any harm, we’re just trying to work out how to be a football club again and not just a fashion brand.
Lee AFC

Arsenal ambition
Aman thinks that Arsenal show a lack of ambition because we have not rebuilt our team in the same way as Chelsea and Manchester City. Hmmm, why have Arsenal not done that? Oh wait is it because we are not backed by a billionaire whose football club is a hobby he loves and pumps money into or a petroleum rich country?

At least Arsene Wengers Arsenal tried WTF?!? As amazing as the early Arsenal teams were the only domestic competition was Manchester United. Arsenal’s decline coincided with Abramovic taking over Chelsea. Is that a coincidence, of course not. There is so much competition now that every team could fall out of the champions league with a poor season. Liverpool showed how possible that is last year. Money talks and not only do Arsenal have a lot less of it than Chelsea, City etc we have poorly used the money we had. A football club being poorly run, never?

However will Arsenal win the league next season, no. My stating that does not mean I lack ambition it just means I take an objective view. My target is to see improvement towards my ambition of winning the league. More points, less goals conceded and hopefully more goals scored. Then in the summer, I want to see Arsenal do things to repeat my target of more points, less goals conceded and more goals scored the season after. Keep doing that and we eventually win the league. It’s not glamorous but it’s a realistic strategy for Arsenal. There are shortcuts e.g. spend £300 million and get one of the best managers in the world but let’s observe how easy that is for Newcastle.

This season I don’t expect Arsenal to get a champions league place. Why? Because of our away form not being great and the fact Manchester United have a much better squad than us and now have a good manager. My perfectly reasonable argument for why I don’t think Arsenal will finish top does not mean I lack ambition or do not dream of finishing in the top 4 this season. I will cheer on every Arsenal match and get pissed off every time we don’t win.

Wenger was magnificent but he stayed to long and left an outdated Club structure. We’re finally moving beyond that. Liverpools improvement began with raising of their off the field practices. Manchester United have proven that money alone does guarantee success anymore and seem to be moving towards a better club structure.

Is Arteta lucky to still be in a job, hell yeah. November/ December 2020 no one would of been surprised by his departure. However who could Arsenal of got in? I think the plan was to give Arteta until January and then look for a replacement coach if necessary. Whether you have given a manager to much time can only be judged in hindsight. The jury is still out on Arteta long term but he is clearly improving. This summers signings prove Arsenal’s off the field practice is as well. Who thought Ramsdale was a mistake?

Maybe Arteta is a good manager? It’s not certain either way yet. Even if Arsenal finish 4th this season some people will still say Arteta is not good enough and was lucky that (insert crisis club) had a bad season.

I stand by the fact Koscielny was a good captain. He was at Arsenal 8 years and was a model professional. In his 9th year something went wrong and he was desperate to get away. The story will come out in time but the rumour is something was wrong between him and Emery.
Croydon Gooner

Liverpool media bias
I find it fascinating that there haven’t been any suggestions that Liverpool demonstrated poor sportsmanship last night when they failed to kick the ball out and instead, chose to score whilst an opposition player lay prone in the box with a head injury.
When Arsenal scored at Old Trafford whilst De Gea lay on the ground, there was a media storm of controversy. Arsenal were rebuked for not putting the ball out of play; accused of poor sportsmanship by endless pundits. The ref was rebuked for not stopping play. VAR was rebuked for not disallowing the goal. All en masse.
In Liverpool’s case, there have been a couple of suggestions that maybe, just maybe, the game should have been stopped before the goal went in.

This all despite the fact replays show Hayden clearly did have a head injury, caused by an interaction with a Liverpool player, which means the game really should have been stopped. Whereas replays show De Gea had his foot grazed by his own player, never should have gone down let alone stayed down, required no treatment and is clearly simulating.

Head injury nonsense
I can’t believe some of the nonsense I’m hearing about how Newcastle were hard done by with the Jota goal from pundits, some even saying it should have been disallowed!

I totally get the caution around head injuries and there is a debate as to whether the ref should have blown the whistle a couple of seconds earlier.

That’s a different conversation though, and as it turns out, the player DID NOT have a head injury. So how can Newcastle be hard done by or unlucky?

Disallowing the goal would be the equivalent of giving an offside just because people thought it might be offside despite VAR proving it wasn’t. Absolute madness!

Liverpool would have been incredibly hard done by and unlucky if a perfectly good goal was disallowed because a defender made it look like he had an injury when he didn’t!
Oliver Thompson , LFC (If you didn’t guess)

Learning from NHL
I’m a fan of ice hockey, nhl to be precise.

Concussions has been a big talking point in US sports for a while now due to some very high profile examples of repeated brain injuries causing extremely violent behaviour due to brain damage. So I’m pretty up to date on this information.

I do think football has the same responsibility to ensure player safety both present and future. I also don’t like how much people overact and lie on the pitch.

A simple solution is to introduce a rule which states that if play is stopped due to a head injury then the player suffering the injury must either be subbed or leave the field for 10 minutes to make sure he is not suffering with concussion.

It’s win win. If you’re genuinely suffering head trauma it won’t matter, if you’re faking then you’ll be punished for faking and people will stop faking.

In the case of Newcastle it was blatantly clear they were faking, despite Eddie Howe saying he was feeling dizzy the very same player shortly after was seen sprinting to help an attack and then sprinting back to his own box again once possession was lost. The player also seemed to be getting up just fine after the initial “clash” right up until he realised Liverpool had recovered the ball then went back down holding his head.
Lee

Learning from Australia
Firstly, the news of Premier League games being postponed (again) because of COVID outbreaks is quite alarming. Not because football is great but also because it feels like we’ve gone back to 2020 (and honestly f*** that year right off). Granted I live in a country that was (relatively) better off when it came to COVID but still live in a city with the dubious title of being the most locked down city in the world.

In saying that, the protocols we have here for fans as well as anyone working in hospitality are quite strict and I feel it’s better that way. Yes players have to get tested every day but fans can’t enter a stadium / Cafe or bar without signing in with a QR code for contact tracing as well as showing that we’re double vaccinated. The minute you’ve been to a place with a covid positive case you need to take a test and isolate. If you’re not double vaccinated here well unfortunately you can’t do anything really.

Reading about how the PL have only just implemented rules to say fans have to show a negative test result on entry to games blows my mind. It’s farcical. What exactly did they think was going to happen given the number of cases on average the UK has had over the last 2 years? It’s not like the players live in a bio bubble and they wouldn’t want to (that’s reason the Ashes almost got called off this year).

This was always going to happen and shows the short term thinking behind the decisions around fans being let back in to stadiums. After all, it’s all about the money right? Cutting off your nose to spite your face as they say.

Anyway that’s my 2 cents and I’m going to go watch Australia beat the Poms on Boxing Day with 90,000 other people.
Rahil, Melbourne