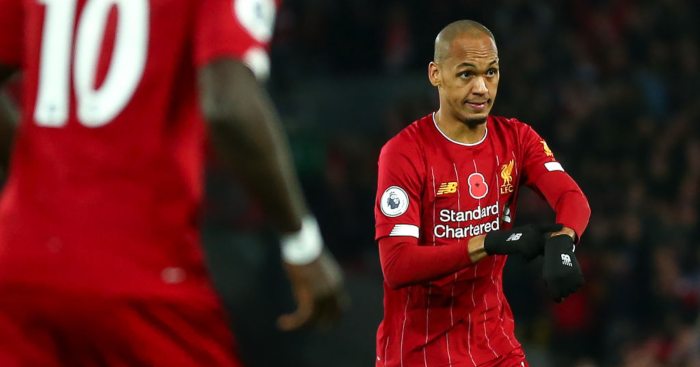 Liverpool midfielder Fabinho is happy with his new “Dyson” nickname while he also likes going by the name of “Flaco”.

The Brazilian has been in brilliant form this season as he has helped Liverpool to the summit of the Premier League table, playing in 11 of their 12 matches.

Fabinho has been deployed in front of the back four this season with a role of sweeping up any danger before it gets into the final third.

And as well as being called the “skinny one” by defender Virgil van Dijk, Jurgen Klopp recently compared him to a brand of hoover.

“A few people call me this! Between us players I’m more known as Flaco but they’re cool nicknames,” Fabinho told Liverpool’s official website.

“Before the coach used it [Dyson], another player used it – I think [James] Milner might have said it.

“It’s a cool nickname but the other one that the majority of the players use, Flaco, that was started by Virgil and everybody started calling me it.”

The 26-year-old scored his first goal of the season against Manchester City in Liverpool’s crucial 3-1 victory and Fabinho says he wants to continue improving.

“I think when the team does well an individual’s abilities shine as well,” Fabinho added.

“I wanted this season to be different because I had already adapted to the team and the league. I wanted to keep improving as a player and help the team out more. That’s what I’ve been aiming for.

“I’m happy for the praise that I’ve got but I know I still have got the scope to improve and I want to keep improving.

“There’s always scope to improve. I’m still young, I want to improve more, develop more. I’ve got personal objectives as well, so I’ve still got more to offer to the team.”