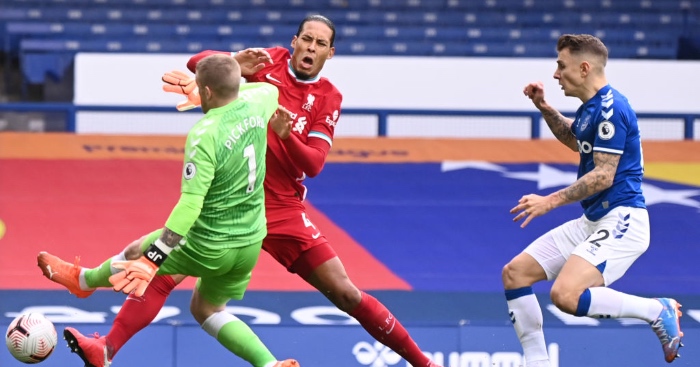 “Of course we are upset. The way Pickford went in was completely stupid in my opinion,” said Van Dijk’s compatriot, who also criticised Everton’s approach in general after Richarlison was sent off for a high tackle which injured Thiago Alcantara.

“I don’t believe he wanted to injure Virgil but the way he made the tackle he didn’t care about what happened after the tackle. It’s happened a lot in games against Everton.

“In my opinion they take it too far in the games we play against them. I know it’s a derby and sometimes it goes over the top but it was too much. It was not the only tackle like that. Richarlison on Thiago was also a nasty one. That’s what annoys me the most.

“Accidents can always happen in football. You can be unlucky and injure someone but the way they were doing it was completely unacceptable. It makes it even harder when they don’t get punished, in this case Pickford.”

Prick of the Week No. 6: Pickford, Richarlison and the Whole Sh*tshow Fallout

“A couple of days ago something happened which should not have happened in a football game,” he said.

“Both challenges were difficult to accept. It’s hard for us because Virgil is our boy.

“Usually, players try to play the ball but not in these two challenges.

“In the last four years, we were the leader of the fair play table. We don’t get anything for that, it’s something people joke about.

“We were up there in both tables. You can play football without these kind of challenges.”