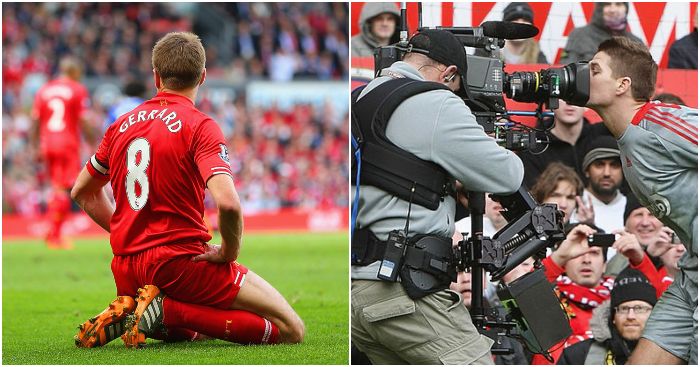 Jurgen Klopp’s Liverpool class of 2019 are only the tenth side to record more than ten consecutive Premier League wins. But can we read into their immediate future by looking at the past?

The run that Liverpool began with a 4-2 win over Burnley in March, and that was halted by Manchester United on Sunday, is the second longest in top-flight history. Manchester City keep their record by a single game.

City themselves have recorded more than ten Premier League wins in succession on three occasions. This is Liverpool’s second time. Manchester United and Chelsea (both twice) and Arsenal (once) have all achieved it.

But how did each side react? Was their confidence knocked or did it release the shackles and relieve the pressure? And which path will Liverpool now follow?

Manchester City
The streak: 18 wins
The period: August to December 2017
What ended it? A 0-0 draw with Crystal Palace at Selhurst Park
How did they react? By beating Watford 3-1 in their next league game, thrashing Burnley 4-1 in the FA Cup and earning a 2-1 lead over Bristol City in the first leg of their League Cup semi-final, before losing 4-3 to Liverpool.

City picked up 58 of a possible 60 points (96.6%) before drawing with Palace, then 41 of a potential 51 (80.3%) thereafter. After dropping points in two of their first 22 games that season, they lost to Liverpool and Manchester United, drawing with Burnley and Huddersfield. But their lead before the Palace game was substantial enough that it really did not matter.

Manchester City
The streak: 15 wins
The period: February to August 2019
What ended it? A 2-2 draw with Tottenham at the Etihad
How did they react? Not too bad initially. They beat Bournemouth and Brighton comfortably, but were stunned by Norwich at Carrow Road and Wolves at the Etihad in between wins over Watford and Everton.

A gap of two points to Liverpool and Arsenal after that ridiculous Tottenham draw stretched to as much as eight points before this past week. It is now down to six, leaving Chris Kirkland frantically wearing down the buttons on his calculator.

Arsenal
The streak: 14 wins
The period: February to August 2002
What ended it? A 2-2 draw with West Ham at Upton Park
How did they react? By letting Jeremie Aliadiere score in a 5-2 dismantling of West Brom. A subsequent 1-1 draw with Chelsea at Stamford Bridge was no disaster, particularly with ten men, nor was the five-game winning streak that put them top by two points at the start of the October international break. The 4-1 win over Leeds at Elland Road was particularly impressive – Arsene Wenger referred to his side as “edging nearer to perfection”.

But pressure from Liverpool in second and third-placed Middlesbrough proved just too much. Wayne Rooney ended Arsenal’s 30-game unbeaten Premier League run by inspiring Everton to a 2-1 victory at Goodison Park, followed by a 2-1 home defeat to Blackburn that Wenger, having watched Brad Friedel make 13 saves after a part of his knee cartilage popped out in the warm-up, described as “unexplainable”. Defeats to Manchester United and Southampton, as well as draws with Tottenham and Liverpool, before the turn of the year proved retrospectively fatal: they finished five points behind United after leading by eight in early March.

Chelsea
The streak: 13 wins
The period: October 2016 to December 2016
What ended it? A 2-0 defeat to Tottenham at White Hart Lane
How did they react? They took it out on Peterborough in the FA Cup first, with an eight-game unbeaten run in the Premier League stabilising those rickety wheels. Leads of five points over Liverpool in second, seven over Tottenham and Manchester City in third and fourth, eight over Arsenal in fifth and ten over Manchester United in sixth were as big as 13, 10, 12, 19 and 17 points respectively by March 2017’s international break, meaning defeats to Palace and United in April barely registered.

Manchester United
The streak: 12 wins
The period: March to August 2000
What ended it? A 1-1 draw with Ipswich at Portman Road
How did they react? With a draw against West Ham four days later. Bradford, Sunderland, Anderlecht and Everton were then thrashed by an aggregate score of 17-2, before draws with Dynamo Kyiv and Chelsea preceded a defeat to Arsenal to start October

Momentum seemed to have shifted but United embarked on an eight-game winning Premier League run – scoring 21 goals, conceding two and keeping six clean sheets – to build a lead they would not again squander. They could even afford to lose their last three games of the season to Derby, Southampton and Tottenham en-route to winning the title by ten points.

Manchester United
The streak: 11 wins
The period: December 2008 to March 2009
What ended it? A 4-1 defeat to Andrea Dossena and his mates
How did they react? By almost bottling it completely. United were seven points ahead of both Chelsea and Liverpool with a game in hand before they faced the Reds at Old Trafford. A 4-1 humbling having led cut that down to four points, and a 2-0 loss to Fulham the following week meant they were just one point ahead of the Reds with 11 games left to their ten.

They came dangerously close to parting ways altogether with their wheels. Liverpool actually went top for a day after beating Fulham in stoppage time, with United facing Aston Villa on the Sunday. They were 2-1 down after 79 minutes, with Cristiano Ronaldo equalising in the closing stages. A point would have kept Liverpool marginally in front, but Federico Macheda sealed all three with a sensational 93rd-minute winner. He repeated the feat with 15 minutes left against Sunderland six days later, as United regained the impetus in the race. But boy, did they wobble.

Chelsea
The streak: 11 wins
The period: April to September 2009
What ended it? A 3-1 defeat to Wigan at the DW Stadium
How did they react? Ostensibly, by winning the league and FA Cup double, becoming the first side to score 100 goals in a Premier League season, and generally being quite great. But the immediate aftermath of the shock Wigan loss was not pretty. They scraped past APOEL and beat Liverpool before defeat to Aston Villa dropped them down into second. They regained top spot the next week and kept it through a December stutter and February stumble, before drawing with Blackburn to go third in March. Seven wins from their last eight games established a one-point lead over United by season’s end.

Liverpool
The streak: 11 wins
The period: February to April 2014
What ended it? A 2-0 defeat to Jose Mourinho’s purest form at Anfield
How did they react? Terribly. Crystanbul happened. They edged past Newcastle on the final day but started the next season with just two victories in the opening six games, four in their first 12 and six in their first 17. They would not record more than two consecutive Premier League wins from the end of their record-setting run until January 2015. Let’s hope they deal with this one a little better.

Manchester City
The streak: 11 wins
The period: April to September 2015
What ended it? A 2-1 defeat to West Ham at the Etihad
How did they react? With a 4-1 victory over Sunderland in the League Cup, before defeat by the same scoreline to Tottenham. City would not record more than two consecutive Premier League wins from September 2015 to April 2016, at which point remembered Pep Guardiola would probably be watching just long enough to finish ahead of Louis van Gaal’s United on goal difference.