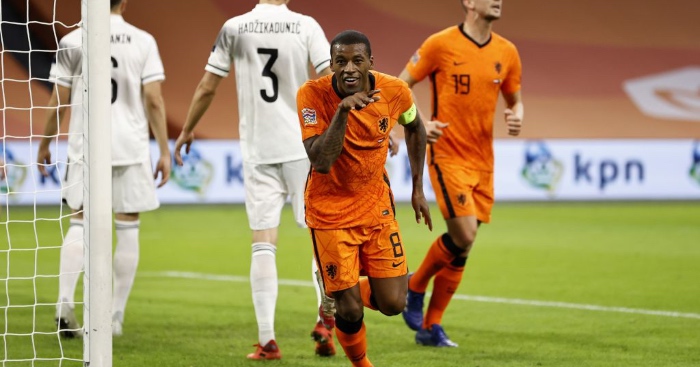 Liverpool have reportedly tabled a new three-year contract for Georginio Wijnaldum to fend off interest from Barcelona.

The Dutchman was closely linked with a move to the Spanish giants during the summer.

Barca manager Ronald Koeman is a big fan of the player and has managed him through the national team.

MAILBOX: Klopp is about to perform his biggest coaching miracle…

According to Italian source Calciomercato (via the Daily Express), the Reds have offered Wijnaldum* a new deal.

It involves a three-year contract extension and a big increase in wages.

The midfielder is yet to respond to the offer but he is expected to do so in the coming days.

The news is a big revelation in the ongoing Wijnaldum transfer saga.

He was thought to have begun negotiations with Barca officials during the summer.

Those talks never materialised into a transfer which is why he remains in England.

The signing of Thiago Alcantara from Bayern Munich was widely seen as manager Jurgen Klopp preparing for life without the 30-year-old.

Due to the current injury crisis at Liverpool, Klopp will now need to keep hold of the player.

He is missing Jordan Henderson, Joe Gomez and Virgil Van Dijk. Teammates Fabinho and Andy Robertson are also out through injury.

Liverpool face a new threat from continental Europe to keep Wijnaldum. Apparently Inter Milan have enquired about the player’s availability.

They’re now set to challenge Barca for the player’s signature, as he is seen as a great all-round midfielder.

It remains to be seen whether a new contract is enough to keep Wijnaldum at Anfield.

Liverpool’s next fixture is against Leicester City on Sunday 22nd November.

*Buy Georginio Wijnaldum and thousands of other players on Football Index. 18+, UK and Ireland customers only, begambleaware.org. T&Cs apply.