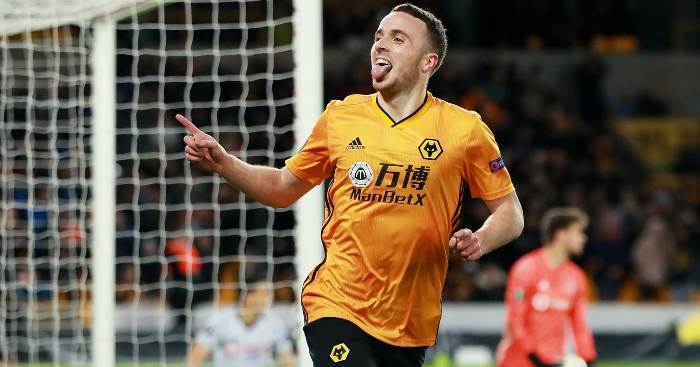 Liverpool have negotiated a deal with Wolves for Diogo Jota that will see them pay just £4m this year for the Portuguese winger.

Jota will join Liverpool in a transfer worth an initial £41m that could rise to £45m, but the switch of Dutch teenager Ki-Jana Hoever means that the Reds will reportedly pay less than 10% of the fee over the next 12 months.

The Athletic claim that ‘Wolves’ willingness to be flexible on payment terms was crucial. They have accepted less than 10 per cent of the guaranteed figure in the next 12 months. The vast majority of that is offset by the initial payment from Wolves for the Hoever deal.’

That perhaps explains why Liverpool have completed this deal while baulking at a similar fee for proven forward Timo Werner.

Jota scored seven Premier League goals last season but was by no means a first-choice forward for Wolves; he did not get off the bench last week against Sheffield United.

#LFC are not signing the Jota people see at Wolves. In the same way we didn’t sign the Mane from Southampton. Or the Salah from Roma. We are signing a player with a very high ceiling that we can turn from good to great.

Teenage Dutch defender Hoever will go in the other direction, joining Wolves for an initial £9m that could rise to £13.5m depending on various add-ons.

The news of this deal broke on the day that Liverpool confirmed their initial £20m deal for Thiago.

Liverpool had targeted Ismaila Sarr from Watford but it seems that the Hornets were asking for an initial £40m for the winger (rising to over £50m) and the Reds did not like those numbers or the repayment structure.