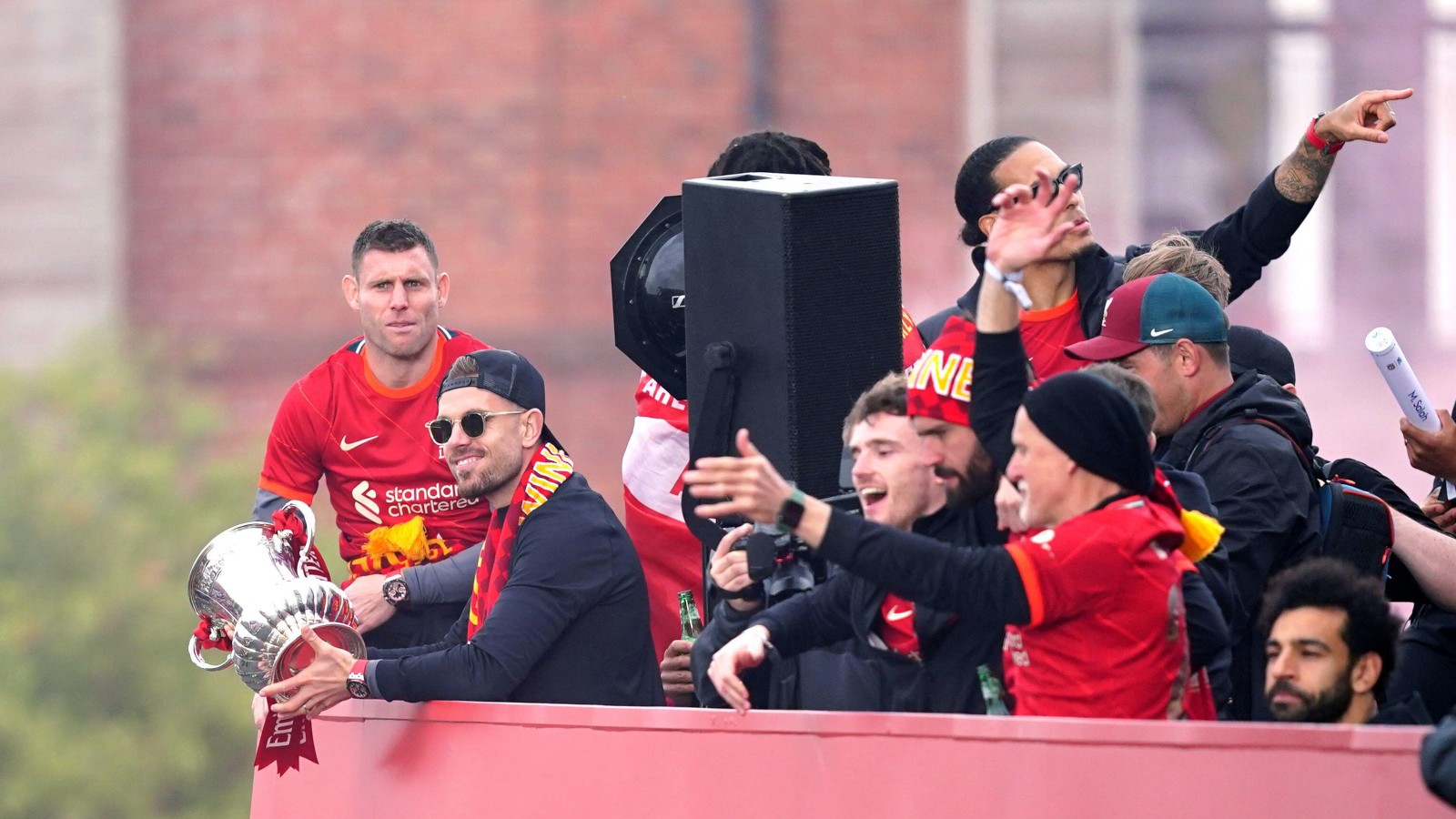 Liverpool players paid tribute to their supporters after ending the season with an open-top bus trophy parade.

A day after losing the Champions League final to Real Madrid, the Liverpool squad and staff returned to travel across the city in celebration with the fans of their FA and Carabao Cup wins.

And while the players were initially not sure whether the parade was a good idea, they were overwhelmed by the response on Sunday, relaying their thanks to the official Liverpool website.

Jordan Henderson
“It’s incredible! We weren’t quite sure what to expect when we came on the bus. Obviously we are disappointed with last night and how the season ended, but overall the lads have given everything and this is what it means to the fans. It’s the least we can do to say thank you to them for what they’ve given us this season, supporting us across the country and across Europe, so we want to say thank you and it means a lot to the lads.”

Andy Robertson
“To be honest with you I woke up this morning in a terrible mood, everyone did. Obviously we were so disappointed with what happened last night, of course we are, but the minute you get on this bus you realise the best fans in the world have come out. It’s great for all of us and it will give us a nice ending to a really tough season. We move on to next season but from this experience we will get we’ll be ready to get back into it.

“We want to win the big titles and when you don’t do that you worry about how you will be received, what will go on and how many people [will turn up], so of course that was in the back of our minds. But hang on, what a turnout from the best fans in the world. They give us something to be happy about and to represent them, for all of us, is the biggest honour.

“We have to show the appreciation to them. It’s been a long, tough season for us and also for them as well: how far they have travelled, how much money they have spent travelling, every game. Sixty-three games, home and away sold out. You kind of appreciate them more and it’s more just a thank you to them more than anything.

Divock Origi
“Honestly, it’s unbelievable. It’s been a special season, we fought on every front all season and now being here again – it’s only in Liverpool you would see this, even after a defeat, even after the final. I still feel pain from the final but overall I am feeling grateful and happy and I’m enjoying it obviously.

“[I’ll miss the boys] a lot, a lot. It’s been eight years, I’ve seen a lot of guys, the staff, the fans, and like I said I think our purpose is done and that helps to put it in good perspective as well. I feel like we are in good hands, there is still so much more to come from this team.”

Diogo Jota
“It’s amazing, to be honest. I was not expecting this much. Of course after the defeat yesterday it feels sad but it’s impossible to be sad at this moment when we have all these people cheering for you and for the team. It’s a sad moment for us what happened last night, but if you can think of all the season – four defeats, two trophies – it’s an amazing season. Now we can celebrate, although it’s hard because of last night. This season was an outstanding one, we did a great job. But I think about improvement and if we can do it next season it will be great.”

Trent Alexander-Arnold
“It was hard to gauge how this was going to go today but I think the fans here, it’s been outstanding and what an amazing turnout. You never get used to winning trophies. This feeling is amazing, to come out and celebrate with the fans, our families, our friends, it’s amazing. We can’t get complacent and we have to celebrate these moments because you never know, we might not win a trophy again. But we are excited about today.”

Ibrahima Konate
“It’s unbelievable, it’s crazy, I never saw this in my life! I don’t want to talk too much because I want to enjoy it now!”