Home F365 Says With their title gone, where does the rebuild begin for Man City? 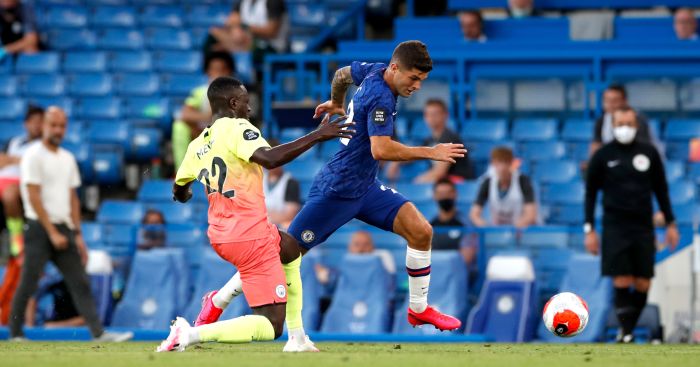 The rebuild begins here for Manchester City. The Champions League remains an achievable aim this season, but a clumsy loss at Stamford Bridge has confirmed the inevitable: Liverpool are champions and Pep Guardiola has ground to recover.

The 2-1 defeat to Chelsea was typical of the restart. It was loose and ill-disciplined and it was ultimately decided by a mistake, but that isn’t to say that City played badly, or that this latest disappointment has no relevance to their future. Quite the opposite; this set the side’s strengths and weaknesses out unambiguously. Particularly at full-back.

The way Guardiola uses Kyle Walker is actually very interesting. In the past Walker has been rotated between full-back and centre-half, as he has been for England too, but he seems to be getting many more touches in-field now. That isn’t the same as saying he makes under-lapping runs, because he’s been producing those since his time at Tottenham and, really, that’s a staple of the position across the continent.

In this instance specifically, it’s more about his positioning. Instead of just being clamped to the touchline, or being pushed high in attacking support, he drops into a pocket of space in support of the midfield, in a shallow right position. On Thursday night, Fernandinho was used as the right centre-back by Guardiola and yet it wasn’t uncommon to see Walker playing inside him, either carrying the ball through the middle of the pitch or, when City had possession in the Chelsea half, dropping into the centre-circle, acting as a failsafe against the counter.

Walker is no longer a young player, but he still possesses the dynamism and dexterity to be a major asset to Guardiola. He remains a vehicle for his manager’s imagination, with these latest tweaks alluding to some pertinent reinvention of this team’s right side.

The left is a different issue altogether, though. Benjamin Mendy stumbled through the night, eventually being substituted. His race might be run and this could prove a pivotal moment in his career. During his first few games as a City player, in that little burst before he ruptured his cruciate ligament in September 2018, he looked like such a force. An excellent technical player, but also a superb athlete. What an exciting time, because the prospect of him on one side and Walker on the other was suggestive of a new type of City dynamic, and another avenue for Guardiola’s tactical expression.

Maybe it would have proven to be exactly that, but there’s no knowing now. Mendy also ruptured a cruciate ligament in January 2016 when he was at Marseille player and, most recently, suffered that serious knee injury at the end of last season, six months after another surgery. In the present day, he’s a battle-scarred player. He’s a very old 25 and never has he looked older than when chasing Christian Pulisic for that first Chelsea goal.

That was Maicon and Bale, Barry and Ozil; it was ugly.

It needn’t mean he’s finished as a top-level player, but it does appear as if – in contrast to Walker – his use to Guardiola is on the wane. Especially in this case, because this will be a night to celebrate Liverpool’s superiority and the most obvious advantage they enjoy, in Mendy’s position and several others, is in superior physicality.

There are other reasons for the gap, but that difference in durability is chief amongst them. There isn’t a 20-point chasm between the standard of the two squads. Nor, obviously, is there that kind of difference between the head coaches, regardless of how their styles clash. No, the contrast is more obvious: one team is more fragile than the other, which is capable of playing and surviving at a higher intensity.

As evidence, the aesthetics of the recent contests between the two don’t lie. A common theme has been Liverpool being too powerful – too energetic, too quick, too strong – for City. The most pertinent example being that Champions League quarter-final first-leg at Anfield in 2018. Technically, Guardiola’s City are no-one’s inferior, but that night they were made to look they didn’t belong on the same pitch.

Not just on that night, either. Klopp’s players have been too muscular on several occasions and, actually, the most recent game at Anfield was remarkably similar in form. Again, City were blown away by three goals without reply.

Not, presumably, because Guardiola lacks the capacity to bridge the gap tactically or build protections into his formation, but because there’s something insurmountable between these two sides. Not something which accounts entirely for the differences between them, but a bigger, broader factor which exaggerates all the little differences. A fault in the DNA, a crack in the foundations.

It’s the athletic profile. It must be. And full-back is where the most damning comparison occurs. It’s not a flattering contrast in midfield, either, and the centre of defence clearly needs attention too, but Mendy – unwittingly, through sheer bad luck – is a symptom of something which has been wrong for some time.

Jurgen Klopp has the benefit of being able to select Trent Alexander-Arnold and Andy Robertson in nearly every game that Liverpool play. Robertson has started 28 games this season, Alexander-Arnold 30. By contrast, Walker and Mendy have managed 22 and 14 respectively.

That privilege of Klopp’s has two implications. Firstly, that his team’s channels are consistently patrolled by two younger, athletically superior players. Secondly, that by fielding both so often in tandem, the chemistry between them is much more potent.

As a measure of what a disadvantage this is for City – as a testament to the effect of a faulty full-back dynamic –  perhaps it’s worth looking at what Liverpool recede to when one of Robertson or Alexander-Arnold is unable to play. As was the case at Everton last weekend, they’re an entirely different side. Without their quick switches of play, without their balance, and denied that ability to change the point of attack in a heartbeat, they’re much easier to predict and contain.

It’s probably not coincidence, either, that as that department has matured and grown stronger in the Liverpool team – and as it has grown weaker in City’s – the distance between the two sides has grown more pronounced. Arresting that trend doesn’t begin and end with Pep Guardiola and Txiki Begiristain agreeing on and then paying for a top-class left-back in the prime of his career, but it would at least revive an area which has been long neglected.

It would also begin to address one of the more general themes of this rivalry, which is that while City have all the quality and the theory and the ideas, they don’t have the body to make that matter as much as it should.