Home F365 Says Forget what’s next for Liverpool; embrace the here and now 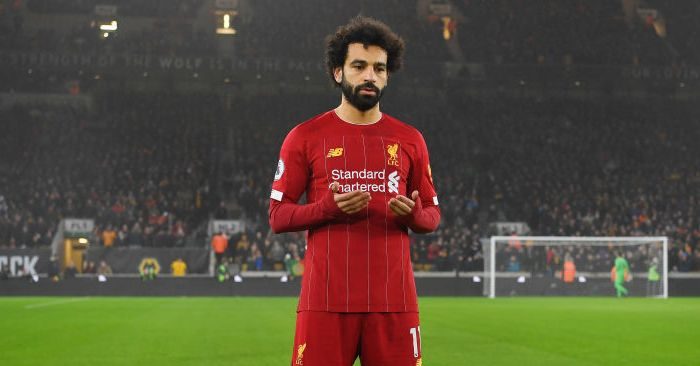 Mohamed Salah’s late goal against Manchester United was an important symbolic moment. There was something poignant in the way the tension lifted, in the Kop casting aside superstition to sing of lifting the title, in the iconic image of Alisson Becker sprinting the length of the pitch to celebrate, the sky a literal shade of red.

Yet within hours of the final whistle the moment itself began to fade as thoughts turned elsewhere. The title hasn’t even been won, but already a two-word phrase – one that captures a troubling aspect of the football fan’s psyche – has entered the public consciousness. Liverpool are going to win the league; what next?

A cursory Google of the words ‘Liverpool’ and ‘dynasty’ reveals that projections of a Jurgen Klopp-dominated future have appeared in columns, podcasts, and panel shows repeatedly over the last six weeks, from The Times to The Telegraph, from Martin Keown on Football Focus to Stuart Pearce on Sky Sports.

On the one hand this is perfectly understandable. It is an analyst’s job to predict future trends and there are plenty of valid reasons to discuss the topic. Fear of how a monopoly would shape our experience of the sport is one, using the language of ‘dynasty’ as shorthand for praising the rich detail in their current success another.

But perpetually looking to the future can be an alarming tendency, and certainly it is always worth pausing to reflect on why we feel the need to do so. Sometimes – and I would suggest Liverpool’s genius is one such time – to project into the future is to miss out on fully experiencing and feeling the present.

Football means everything. It’s a microcosm of the socio-politics of the age. It’s a space for escapism, for venting anger. Perhaps most of all it’s an opportunity to cling to narrative certainty in a world that so often feels messy and outside our control.

It is inherently grounding to experience life in seasonal league tables, in clear boundaries of success, failure, hope, renewal – and improvement. How comforting it feels to muse on the controlled linear growth of our club. How regulating it is to visualise tangible goals and to feel (however deluded) that we know exactly what needs to happen for our team to make progress. If only real life was so simple.

The problem with all of this is that it’s mostly an unconscious process. The nature of our fandom – our gut reactions to defeats, our obsessive reading of transfer gossip – is not a choice but an automatic reaction. And that makes us susceptible to our default, hardwired setting: to live for the future, and as a consequence to forget to luxuriate in the present.

Forever looking to build on our accomplishments has been an important evolutionary tool; the driving force behind our nomadic ancestry and our species’ rampant expansionism. It took us out of the caves and to more prosperous climates, it stopped us settling for relative comfort and gave us the urge to cultivate crops and mingle with (see: invade and slaughter) other tribes.

But in the modern world it tends to get in the way of appreciating what we’ve got and feeling alive in the current moment. Many of the great philosophers and poets (from Neitzsche to Heidegger to Camus) have sought to reassert the importance of truly being, and that presence – real, spiritually awake presence – is the essence of life itself. As the romantic poet William Wordsworth discovered after a lifetime of searching for meaning: existence is about the ascent up the mountain, not the discovery waiting for you at the top.

Or in the words of a more contemporary figure, and returning to Liverpool’s present tense: ‘I swear you’ll never see anything like this ever again. So watch it. Drink it in.’

Liverpool might build a dynasty; they might not. Man City’s season is a warning against such prophesies. Klopp might stay, or he might get tired. Everything could fall apart within 12 months. It doesn’t matter. Counting up trophies, overtaking Man Utd’s 20 league titles or building a lasting empire should be the material consequence of enjoying the feeling of triumph, not the other way around. To yearn for future success is to never fully indulge in the elation of what is unfolding, week after week.

The urge to push this year’s inevitable title to one side and focus on what’s next will be strong. But, Liverpool fans, resist it. This feeling, right now – of pride, of love, of smug superiority – is the thing itself. So drink it in.