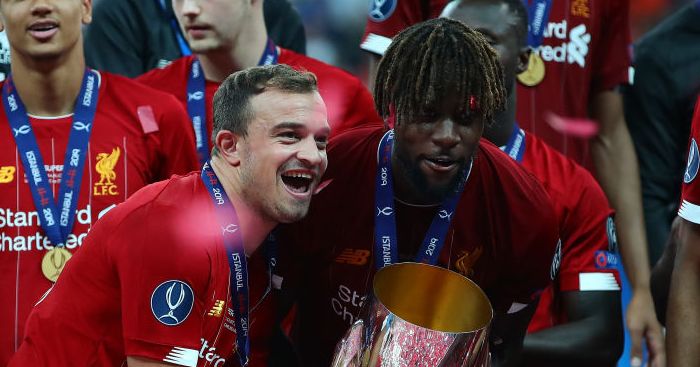 Liverpool could still sell up to six ‘unwanted’ and ‘available’ players in an attempt to raise funds for transfers.

The Reds face the prospect of a second straight summer without any major first-team signings due to the financial impact of the global pandemic.

Liverpool might have already won this summer transfer window

Despite interest in Timo Werner and Houssem Aouar, they were said to ‘look virtually certain’ not to spend again.

But Goal.com suggest the club could still generate money by selling some fringe first-team players.

A report says that they ‘would reasonably have hoped to raise significant funds’ by selling ‘unwanted’ and ‘available’ players in Divock Origi, Dejan Lovren, Xherdan Shaqiri, Loris Karius, Harry Wilson and Marko Grujic.

Those plans might have changed, however, as ‘it remains to be seen if the markets which existed in February still exist in July, August or September’.

Roma have been linked with Lovren, while Newcastle are said to have an interest in Shaqiri.

Karius has endured a difficult loan spell in Besiktas, Grujic has previously expressed his belief he can break through at Liverpool and Wilson was said to be valued at £30m in February.

Liverpool could still move for Jadon Sancho after it was revealed that ‘funds will be found’ if Jurgen Klopp ‘does want the player that badly’.

The Reds ‘are monitoring developments’ with regards to the future of Sancho, who sees Anfield ‘as a more attractive option’ than Manchester United.