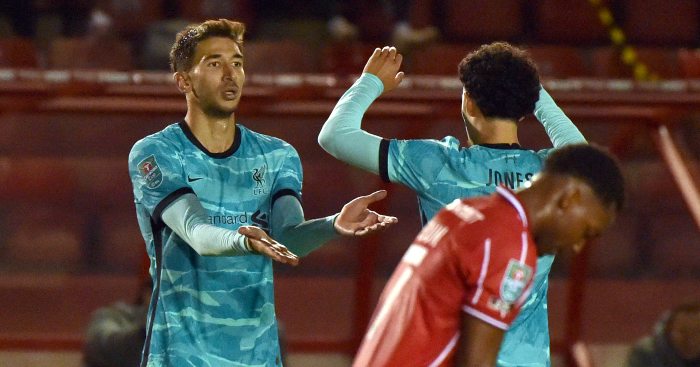 A report claims Liverpool have ‘received offers’ for three players as they all look likely to leave before the transfer deadline.

The Reds have allowed the likes of Dejan Lovren, Ki-Jana Hoever and Adam Lallana to leave this summer, while they have invested in Kostas Tsimikas, Thiago Alcantara and Diogo Jota as they look to improve their squad.

And it seems unikely that Liverpool are done with outgoings with interest in Rhian Brewster, Harry Wilson and Marko Grujic ahead of the transfer deadline on October 5, with ‘all three in line to leave the club’.

Goal claims that Sheffield United are leading the race for Brewster with the Blades ‘willing to sanction a transfer which would cost them up to £20m including add-ons’ for the England under-21 international.

Liverpool plan to include a buy-back clause in any deal to let Brewster move on with Crystal Palace, Fulham and Brighton all linked with the 20-year-old.

Burnley, meanwhile, are understood to have made a £12m bid for Wilson as they look to prise him away from Anfield – but Goal adds that their bid ‘is thought to fall some way short of the Reds’ initial asking price’.

And finally, Grujic, who joined Liverpool for around £5m from Red Star Belgrade in 2016, is ‘the subject of an offer from Borussia Moenchengladbach’ after spending two years on loan at Hertha Berlin.

Grujic ‘accepts that competition for midfield places means he is unlikely to get regular game-time’ at Liverpool and ‘is understood to welcome the idea of a permanent move’.

The main stumbling block is likely to be the Reds’ £20m valuation of the midfielder with Liverpool ‘believing he has proven himself as a top-level midfield’.