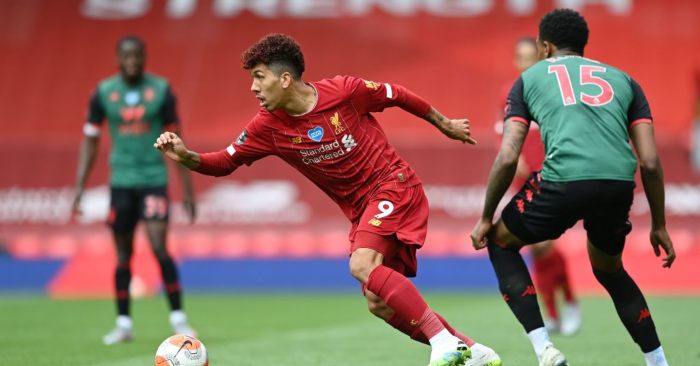 Roberto Firmino dominates the Mailbox. Send your views on this and more to theeditor@football365.com

Liverpool without Firmino? No thanks
Watching Liverpool play after our title confirmation and here are some things that stick out:

* Origi for Firmino won’t work. For all the moments Origi has delivered, he can’t fill the Firmino-shaped hole in front three, not while Mane and Salah are playing. Nobody there to create something or link play unless we have some creativity on the wings.

* Speaking of creativity, I really hoped we could see more of Eliott/Minamino. What exactly are the roles they play? We can’t play the current system without any of the front three.

* I get a feeling Klopp will be dipping in the transfer market for Robbo’s backup. If only we could afford Koulibaly too….

* Speaking of VVD, without him, our defence would be Lovren/Matip/Gomez. And we have seen how that went down.

* If Thiago is indeed coming in, does that mean Keita will be sold off? Where does Thiago fit in?

* Also with systems, the games after restart have made some things pretty clear: Without Robbo, TAA, Firmino, Liverpool just don’t look the same.
Vikas, LFC, India (Our 17/18 was the best one hands down)

He’s a very false 9
I read Will Ford’s article on Firmino and it’s hard to disagree that his movement is important for Liverpool (Firmino’s, not Will’s). Nevertheless, as good as other parts of his game is/has been, Firmino’s lack of goals must be a concern. Zero home goals and only 8 away goals all season – I know he’s a false 9, dropping deep to leave space in behind for the other two, but that’s extremely false. Without wanting to antagonise, it must be the lowest ever return from a league-winning first-choice striker.

Now clearly it wasn’t an issue this season as they romped to the title, but retaining a title is more difficult and there is likely to be greater competition next season. Perhaps missing out on Werner could be more detrimental than first imagined if Firmino’s dry patch continues, so a goalscoring striker should still be a priority for them.

On a slightly different note, linked to United’s forwards, it is great to see Greenwood get a few games under his belt and scoring some lovely goals. However, I still think we need a proper RW and so I hope we are in for Sancho (or Matondo as a cheaper alternative). Greenwood will still get plenty of games as can play anywhere across the front three. Nevertheless, our performances are thoroughly enjoyable at the moment but we will need a couple more players to mount a sustained tilt for the title.
Garey Vance, MUFC

It’s funny how when Liverpool decimate the league people find excuses like the league is not as strong as before, other big six in turmoil etc
If anything the quality of the league has been increasing…

Against City we showed nerves and was a little too enthusiastic (see Robbo going out) as champions for the first time. Klopp will know how to guide this team having gone back to back in Germany. This team definitely knows how to find a way to win…

My money is on Liverpool for the treble next year. Lolz, make us dream!!!
KP YNWA [gerrard is an inspiration for the generation)

…And that is why Liverpool are champions and City are not.
Nathan Carter

…So is that ninth Man City defeat (more than Maun United, Wolves and Arsenal!) also laying down a marker for next season?
Steve, LFC. London (via Bootle)

Re William Douglas Foster – it was a penalty. It hit his arm, he was in the box. VAR slowed it down to the nth degree and agreed. Literally no one saw it in real time, except Mike Dean, and he called it perfectly. It was an unbelievably good call, and the only painful part was waiting for VAR to confirm it. You’d be better off feeling aggrieved at Matic being unable to play a ten yard backwards pass on his stronger foot.

Also, very harsh to call out F365 for anti-Utd bias. They slag everyone when it’s deserved. United have just been particularly laughable for the last five years – and this from a United fan.

Re ‘the vocal minority’ – City are still gonna hit 80 points. How many times did Ferguson win the league with that? Liverpool were relentless, and City starting giving up the chase when it became obvious that they weren’t gonna catch them. That happens. Guardiola’s still going to average roughly 90 points across three seasons. He’s won 15 trophies since leaving Barca, and in ridiculously impressive style. No reasonable person could say he’s dining out on that success. Yes, he’s not perfect, but to pretend that Garcia was some ready-made solution to Laporte’s injury is so annoyingly simplistic. Garcia has not been as good as he was against Liverpool very often. He’s talented, but he’s young. And Guardiola was clearly trying to fit Fernandinho and Rodri in the same team – if Rodri isn’t bedded in before Fernandinho leaves, City are in trouble. It made sense.

Just enjoy this Man United side
In response to Rob’s question, I’m personally quite happy that the football has resumed. It’s proving to be a nice distraction from the current global mess, and it seems like the system the PL has set in place for the remainder of the games is working reasonably well so far.

It’s also been great watching this United team evolve, and I think us fans can be cautiously optimistic about the squad getting even better, as the younger players continue to mature. Most importantly, I actually look forward to games again. Solskjaer’s rightfully been criticised for a lot of things in the past, but he also deserves credit for the way things are going now.

On the matter of Liverpool, I may be in the minority of United fans when I say this, but I feel like voiding the season would’ve been extremely harsh, and “not in the spirit of things”. They’ve been utterly phenomenal this season, and to simply cancel all of that would have been a dick move, had it come to pass.

So all in all – enjoying watching this young United team progress, and also happy for my Liverpool-supporting friends, who get to revel in the title win. Stay safe everyone!
DJ, MUFC India

Angel Eyes
In response to Ted’s email on Angel Gomes.

Ole has brought through Greenwood, Williams and to a lesser extent Tuanzebe (who has unfortunately been injured a lot) this season. Questioning his commitment to youth is just silly. He has also signed up Chong for the long term and given Garner limited minutes (in which he struggled).

Gomes however, has chosen not to sign so why should he have been playing him if he wouldn’t commit long term? Also, Gomes is 5ft 4inches which makes him 2 inches shorter than Ryan Fraser the leagues second shortest player. As a fellow short arse he has my sympathies but given Ole sees him every day perhaps he’s decided that he’s just not up to it in the land of the giants?

Personally I hope he has a great career and I’m wrong but I’m also glad that Ole refused to be held to ransom by a player who is refusing to sign a new contract. If United are to truly progress and build on the post Fernandes signing momentum then being run properly with players who want to be at the club will only help that.
Rob, Guangzhou

The Chelsea view
Jon from Cape Town put out the call for any United or Chelsea fans to comment on their team’s future, naturally I can easily answer the call for the Chelsea side of this discussion, so here is that answer.

This season has certainly been one for the history books, in more ways than one with what has been going on on and off the field throughout the world, we entered the season with a Transfer Ban that we had fully earned due to previous off the fields dealings, the loss of our best player in Eden Hazard and only one major incoming signing that was new to the team, that being Christian Pulisic.

Mateo Kovacic’s £40m option to buy was activated, a move that would unlikely have happened if a ban had not been in place and he has had an exceptional 2019/20 season, Player of the Season for sure and could be in with a shout of the PFA TOTY, a long shout but he deserves to make the bench at the least.

Frank Lampard a manager inexperienced at the Premier League level with only one season of management under his belt took the helm at Stamford Bridge and instantly looked to the Youth Academy, now some might say he had little choice given the ban, however not many managers actually have utilized our academy and there are just so many names over the years who we have produced and yet have never given an opportunity to, under Frank this has been completely different, regular names on the team sheet this season have been the likes of Mason Mount, Tammy Abraham and Reece James, all have impressed throughout the season and Mount even after the restart has continued to do so, the likes of Christian Pulisic are showcasing why both ourselves and Liverpool were chasing after his signature last year and at times he shows that “Eden Hazard” like ability of creating something from nothing, running at the defence and gliding past opposition players, it is a lovely skill to watch.

Going into next season with the additions of Timo Werner and Hakim Ziyech the expectations are greater, this season was always a “Free Hit” so to speak, Top 6 was the aim and Top 4 was certainly the ambitious goal, this is why I am not a fan who is currently worrying if we fail to make Top 4, our squad has shown throughout the season that we are not quite at that Champions League level, next season with those two additions we certainly are, but we need to improve our defence, that includes left back, centre back and arguably goalkeeper, if we can solve those three positions then a title challenge is certainly on the horizon in two seasons time, this summer a left back is priority, once that is sorted it turns to if we give Kepa another season and invest in the centre back role or trust our centre back options and invest in a new goalkeeper, to many new players at once is never a good move and in the current financial climate it is unlikely that any club would make so many additions, but we shall indeed see.

Overall I have never been more excited as a Chelsea when I look to the future, it will certainly make the Premier League an even more competitive league when it goes from the two-horse race to potentially three and four with ourselves and United.
Mikey, CFC (Mike Maignan as our goalkeeper, left back Tagliafico and Declan Rice for centre back are my shouts)