Home F365 Says Will Liverpool return to the imperfect chaos of 17/18? 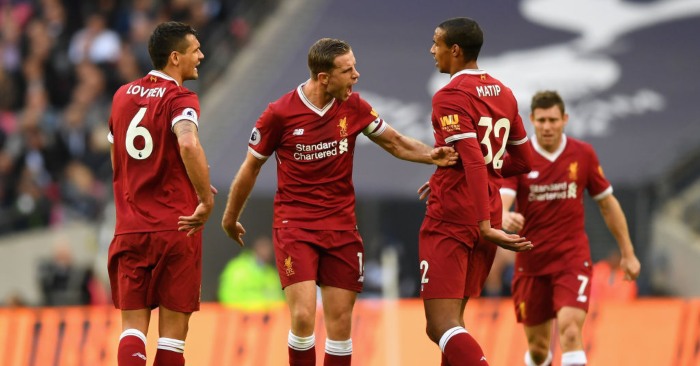 I had an oven-ready article all nicely warmed up a few weeks ago. It was going to plot the formidable path of Liverpool exactly three years to the day since their last chastening Premier League defeat. That was October 22 2017 when Harry Kane hoodwinked the hapless Dejan Lovren twice in a 4-1 hammering. It was a key turning point in their development. Transformative, or whatever the buzzword is.

At the end of last month, Arsenal had been obliterated at Anfield; Chelsea had been dismantled at the Bridge a week earlier. The Reds were full steam ahead. We could only come up with ridiculous reasons why they would not win the title. But, as Brendan said, football is “dynamic”.

In the last couple of weeks, the destroyer has been depth-charged and is now hobbling into port to assess the damage. Temporary respite was achieved in Amsterdam, which was a red-light district on Tuesday night even without Virgil Van Dijk’s presence.

Have you ever seen Jurgen Klopp look so very, very down after Saturday’s Battle Royale of flying limbs? Even Gini Wijnaldum’s constant smile became a frown with a not-so-subtle sideswipe at Everton’s aggression. Liverpool’s ‘Talos’ has crashed to the ground, struck amidships.

Now, if you haven’t got a Greek mythology book to hand or can’t remember Jason and the Argonauts (it’s often on Channel 5 when nobody is watching) Talos was a giant bronze statue who guarded the island of Crete by throwing stones at the ships of unwanted visitors. No libellous Harry Maguire references required, thank you.

In the film, the only way to defeat the colossus was to unscrew a rivet in his ankle. This is effectively what Jordan Pickford did on Saturday, although accidental knee-capping was Jordan’s preferred method. The bottom line is that the team have lost their almost indestructible guardian and their island is now open to invaders.

So, let us start again. It is three years to the day since the Reds experienced that, ahem, ‘chastening’ defeat against Tottenham. At the time, Klopp was beginning to feel the weight of Liverpool’s history: “If you look at the 125 years of Liverpool, then you can see the problem. Nobody knows when it was worse, only when it was better.” Jurgen need not have worried. Things would only get better in the 127th year.

As the Liverpool coach left Wembley after that car crash of a performance against Mauricio Pochettino’s men, they had already conceded a whopping 15 goals on the road. When Lovren was substituted for his own sanity after just half an hour that day, it left Joel Matip and Joe Gomez to play out the rest of the match in central defence. It did not go well. In October 2020, the two still haven’t started a game together at centre-back. Yikes.

After five matches this season they have 10 points, just three behind Everton, but have conceded 13, the most in the league. Van Dijk has been on the pitch for all but two of those concessions so far. Clearly, the engine has been spluttering since it became clear that the league was in their back pocket, but overall the stats offer more clarity. VVD has had 95 league starts, where they have kept 44 clean sheets. During the 95 games before, there were 29 clean sheets and over 40 more goals conceded (117).

Fabinho did his brilliant arms and legs Inspector Gadget effort on Tuesday night to keep Ajax at bay, but it is not the same. The worrying frown of Gomez and the jelly-like body of Matip are the only other senior options down a very long stretch of motorway.

Fourteen of their league wins last year were single-goal margins. Ominously, Saturday was the first time Liverpool lost points to a goal in the last 10 minutes since Alexander Lacazette’s 82nd-minute strike at the Emirates in November 2018. That is how brilliant this side have been. Might there just be a return to the imperfect chaos of when fantastic goals at one end were offset with counter-punches and creaking calamity at the other? As a policy going forward (no pun intended), it lacks sustainability, but it would be enormous fun to watch the 2017/18 model again.

Of course, Liverpool have modified their approach somewhat, from a thundering horse that kicks open the starting gate, but then tires down the long Grand National straight, to a thoroughbred that can stay the course. The heavy metal football is still there in short bursts – just look at that Arsenal match – but the defensive artillery over two years was so well drilled. It was always going to be a major ask to repeat that consummate excellence.

2020/21 doesn’t seem like a season of tidy stats at the back. Enemy gates are more open everywhere. No one seems entirely sure of themselves. Klopp’s mentality monsters are going to have to go into overdrive to keep the prize.