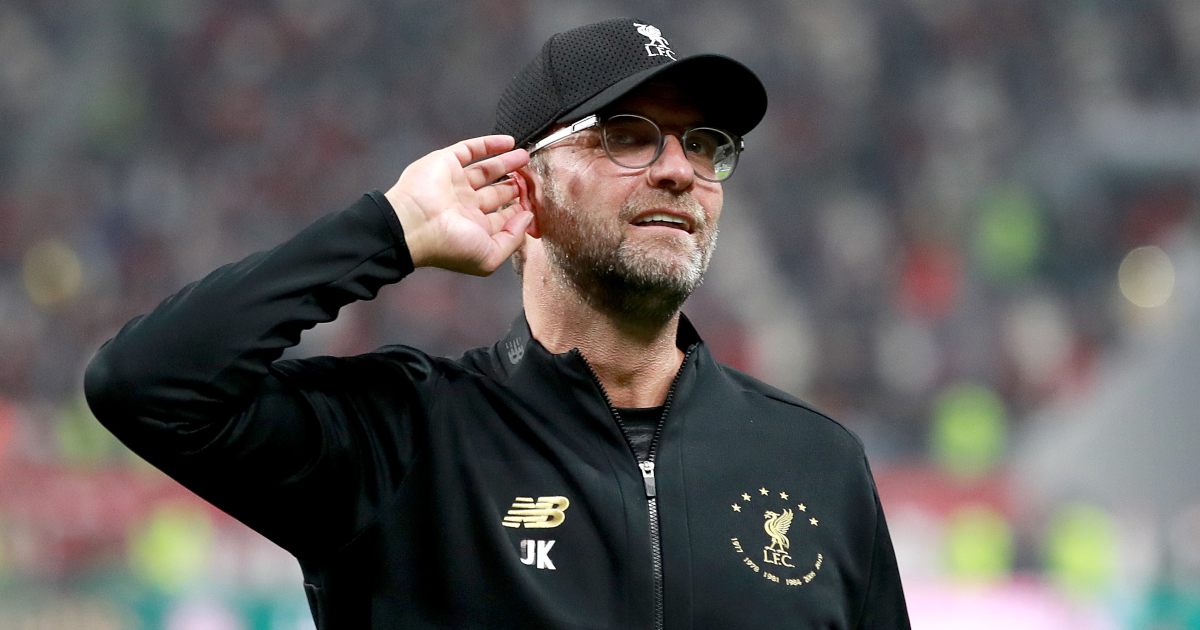 Keep your mails on Liverpool and anything else coming to theeditor@football365.com…

Jurgen Klopp
I wanted to email about comments on Klopp being a one trick pony.

In previous seasons and teams, Klopp’s teams were based on counter-pressing.  They would allow teams a reasonable amount of posession, sit somewhat deep and spring targeted presses on opposition players when they made a mistake.  The point of this system is to win the ball back when the other team have most of their players upfield and get the counter attacks that the CL winning team were so famous for.  The weakness of this system was that if teams were willing to only attack cautiously, they could blunt a lot of these chances.  You end up with a bunch of draws.

The title winning team was completely different.  They pressed much much higher up the pitch, but to paradoxically created less chances directly from pressing, as they forced defenders to play it long from their own penalty box rather than allowing them to possess the ball and then steal it.  This vastly reduced the chances they conceded, but addressed the problem of teams sitting back via brute force rather than wizardry.  They created tons of decent chances and mounted enormous psychological pressure through sheer volume of possession, but still only got high danger chances when teams took risks and attacked them.  This is why Thiago was signed, to potentially be someone who could slip balls through the tinest cracks.  It hasn’t worked due to injuries, covid, and this tactical plan not working without seriously rapid CBs.

I will offer two criticisms of Klopp though.  One, playing Jota and Salah in the Midtjylland game was inexcusable.  Two, I thought that once Gomez went down as well, he should have pivoted to the old system of defending deep and counter-pressing and counter-attacking, as none of the remaining CBs had the pace and nous to sustain the super high line.

I’m still completely Klopp in, and I expect the team to react to this in the same way that Manchester City reacted to the dissappointment of last season.  The key worry is that Klopp takes the Germany job to move back home and do something less intense.
Dan, Plastic LFC

Next year is their year!
I’ve been derided, much maligned & ridiculed by Liverpool fans due to my prognosis on what’s happening at Anfield. I was told, in no uncertain terms, to shut up, as it’s all due to “injuries”, & all will be well next season.

I’d like to ask, are there any Liverpool supporters who still believe the current malaise is down to injuries, & normal service will be resumed next year? Is the absence of VVD & Gomez the reason why Mane & Salah can no longer beat a single player?  That the most feared front 3 in world football, are currently about as effective (& feared) as Joelinton, Carroll & Gayle?  We were told the player really missed was not VVD or Gomez, but Jota, & since his return, things have got even worse!

The sooner Pool fans start to face reality, the less hurt & pain they have to endure.  For 3 years these players have been played into the ground, with barely any rotation to key players, by a manager more interested (understandably so ) in short-term glory, than building a dynasty.  As it often happens, during that period he had lady luck on his side (I’ve often wondered, seriously, if he’d made some sort of pact with the devil, due to the inordinate amount of fortune they enjoyed on & off the pitch).  Well, the chickens are home to roost, lady luck’s off to pastures new, & devil’s calling in his debt!

These players are not only knackered, but 3 years older, & past their “best before” date.  The fear factor’s also gone, & that’s really hard to regain, just ask Man Utd.  In the past few seasons, many teams were beaten before taking the field against Liverpool.  That’s no longer the case, in fact it’s the opposite, every team wants to play Liverpool now!

So, at the risk of repeating myself, & incurring the wrath of the self-proclaimed “best fans in the world”, I state again, this team’s finished, Klopp has no history of managing to turns things around, or re-building teams.  The ridiculous “no bad luck at all, & tonnes of good luck” cycle you enjoyed, on & off the pitch, is over.  (I can’t be the only one who’s wondered how, for the best part of 3 years, the key sextet of Trent, Robertson, VVD, Mane, Salah, & Firmino barley missed a game – all the more incredulous given the high-intensity football they played)

Unless there are whole-sale changes, which the absence of CL football will preclude, Liverpool will not only struggle to challenge for the title, they’ll be in a real fight for top 4 places.

And my beloved Spurs are on the up & up, I’m so gutted we played Liverpool at Anfield just before they ran out of steam (& we were still the better team & unlucky to lose!)
Fred (did Klopp write the lyrics: “goodbye everybody, I’ve got to go, gotta leave you all behind and FACE THE TRUTH!), London

Liverpool should make it interesting
I have been a lifelong Liverpool supporter, and I think the most interesting thing Liverpool could do for everyone this season is to continue losing games. It would be boring for them to suddenly start having a decent run and finish 4th or 5th. Who would want that. Nobody that’s who.

Imagine instead that the team just continues to lose, who wouldn’t want to watch that? How fascinating to watch! It would make next season the “season of redemption” where they win another title free from pressure and having to prove that they can still win games.

You DO sell this Martial
Gary Neville said in commentary yesterday ‘you don’t sell this Martial’. I’d say this is exactly when you do sell him, as it’ll be the only chance to shift him. Who in their right mind would buy the sulky, uninterested version that we’ve seen for most of the season?

Despite a number of deficiencies (uncertain gk situation, lack of pace at centre half, lack of creative support for Bruno, lack of any sort of attack from the right flank), I think this Utd would go pretty close in all competitions if you swapped martial and £100m for Haaland.
Andrew, Banbury

On Man Utd…
So… Edward Woodward was a genius all along?

Regards
Wik, Pretoria, (Villa next at Anfield, 7 goals anyone?) LFC

Always biased…
F365 continues to demonstrate its inability of being unbiased when it comes to Man United. The ‘winners’ section on Man United started off with some praise for United and Ole but quickly degraded to shift the narrative, and by the end United were heavily criticized for failing to win the title. A couple of points if I may:

Reversal of roles
In a season, as defending champions, instead of deciding who are the title contenders, Liverpool is deciding who gets relegated.

In short, Liverpool has “lost” at least 13 points to the current bottom 6 teams.
James How ? Anfield Reds

Premier League nostalgia
Does John Nicholson even read the other articles posted on your website? As if to prove true the article posted on Saturday highlighting the contradictory reporting of Man City and Liverpool’s dominant seasons, Johnny followed up on Monday morning like a lamb to the slaughter. To take one choice cut of a long rant: “This is not anti-City per se, its anti-domination and the feeling would be the same for any team that so dominated and was pulling away markedly”.

But hang on, I remember John taking a very different tone last season when Liverpool were run away leaders. Excuse me, I’ve just been sick in my mouth.

I’m not writing in just to point out the pure hypocrisy though, but to make a wider point. John didn’t seem to mind the league being dominated by Liverpool because that gave him a warm and fuzzy feeling of nostalgia. It was how things were when he was a kid, just getting into football, and so it kind of felt ‘right’. I recall the mailbox having similar discussions about teams who feel like ‘proper’ Premier League teams: Leeds, Villa, Sheffield Wednesday, Nottingham Forest all do; Watford, Bournemouth, and Brighton not so much. Obviously, this has nothing to do with sporting success and merit, and all to do with who happened to be in the Merlin Premier League Stick book when you were ten.

It seems like for John, and I’m assuming many others, the same feeling also applies to ‘proper’ Premier League winners too. Liverpool, United, or Arsenal win the league and it brings with it a nice hit of nostalgia, even if you’re not a fan of those teams. At the very least, it seems to be accepted as the norm and not questioned. A Blackburn, Man City, or Leicester win can be enjoyed as long as its a one-off as a kind of curiosity – in the same way everyone enjoyed Blackpool’s single season in the prem – but then they better have the decency to piss off again sharpish. Its when City have had the indecency to stick around too long that people seem to become uncomfortable – it just doesn’t ‘feel right’. Often people then seem to justify this by coming up with reasons for their discomfort as John has done: “its about domination” which are transparently nonsense.

The obvious problem is that this is the equivalent of saying ‘I want things to stay the same as they always were’ and ‘I don’t like change’ – it is, in essence, anti-sport as it allows no room for new challengers to arise and old empires to crumble. The rich man at his castle and the poor man at his gate, twas ever thus and forever will be. Here’s an idea for John: the nostalgia Premier League: the same teams as the top flight in 1980, no relegation or promotion, and only Man United or Liverpool are allowed to win it more than once in a row. Oh, and Manchester City have to bumble around lower-mid-table every year. That should keep everyone happy.
Bristol Blue