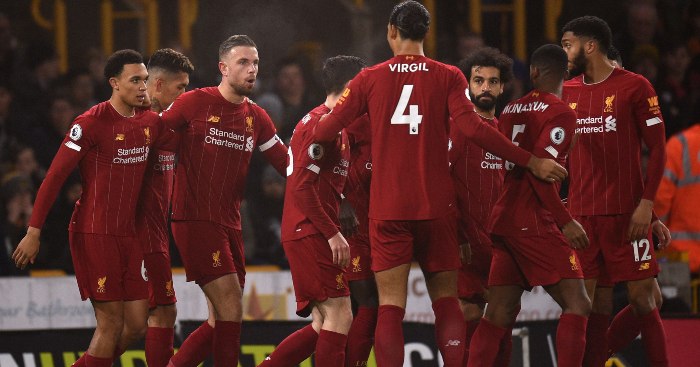 The Premier League champions if and when sport comes back to rescue us all from historical minute-by-minutes. It is, at last, their year.

Best player: Jordan Henderson
Pick who you want here quite frankly. There are contenders all over the pitch, but it’s soft lad Jordan Henderson who is the beating heart of a frighteningly good team. He may throw onion rings at sailors but he’s become a seriously impressive footballer. Think we can now say with some certainty that he is absolutely definitely better than Eric Dier.

Biggest disappointment: Adrian
Probably harsh because nobody could have reasonably expected him to be anything other than a significant downgrade on Alisson whenever pushed into service, but in a season of astonishing success Adrian has been a conspicuous part of many of the lower moments. Admittedly they have mainly come in the cups and more often than not Liverpool have still won anyway because that’s what they do, but he’s also kept just two clean sheets in 11 Premier League games. Liverpool still won all 11 of those games, mind.

Mad that Adrian and Alisson are Liverpool's two senior goalkeepers and not just a couple from Doncaster that your parents befriended on that holiday to Mallorca when you were a kid.

Best performance: Leicester 0-4 Liverpool
Again, plenty to pick from here. But in a season full of statement victory after statement victory, going to their nearest challengers at the time and running rings around them for 90 minutes to open up a 13-point lead just after Christmas with a game in hand was the loudest of the lot.

Already by then clear and obvious favourites for the title, this felt like the moment when it really was all over for everyone else. Phil McNulty’s match report for the BBC was typical in exclaiming – albeit with what we now admittedly know to in fact be a significant failure of imagination – that after this rout it was ‘almost impossible to see how they will not claim their first title in 30 years’.

Worst performance: Watford 3-0 Liverpool
That’ll be the easiest section in any of these end-of-season reviews, then.

When your only other dropped points in 29 games come in a 1-1 draw at Old Trafford, a 3-0 spanking at relegation-threatened Watford will stand out even more than usual. An astonishing second half at Vicarage Road saw Ismaila Sarr score twice before Troy Deeney added a third to end Liverpool’s 18-game league winning run in scarcely believable fashion.

It was undeniably true that Liverpool had, inevitably in a winning run of such length, occasionally rode their luck a tiny bit and picked up plenty of one-goal wins, but nobody really expected their unbeaten run to end here and certainly not so emphatically. Defeat cut Liverpool’s lead over Manchester City to a precarious 22 points.

Biggest VAR moment: Sadio Mane’s goal ruled out at Manchester United
For all the dreadful, dreadful LiVARpool banter, the Reds have found themselves on both sides of Stockley Park’s shitty stick this season. It just generally hasn’t really mattered. They pretty much win every game anyway. It stands to reason, therefore, that the biggest VAR moment must come in one of the games they didn’t win.

There were two key VAR moments in the first half of the 1-1 draw at Old Trafford: Marcus Rashford’s goal controversially allowed to stand for United; Sadio Mane’s ‘equaliser’ chalked off for handball. Logically, the decision VAR actually changed has to be the biggest VAR moment, doesn’t it? Even if the other decision is more controversial? Don’t know why I’m asking you, I’ve already decided that it does.

Dick move: Klopp watching the Shrewsbury FA Cup replay on a laptop
Jurgen Klopp is great, obviously, but he’s had a couple of missteps along the way. The proper football stuff after the Atletico Madrid defeat was a bit wanky, and whatever his protest motives for not even nominally treating the Shrewsbury replay as a first-team fixture was also a bit off. Especially as, whatever the reality of fixture list congestion and legitimacy of Klopp’s complaint in general terms, Liverpool could have avoided this particular inconvenience by simply defending a 2-0 lead against a League One side.

Did their recruitment work?
Yes, inasmuch as they didn’t really bother with it much and understandably stuck by the squad that had won the Champions League and in any normal season would have added the Premier League title as well. No, inasmuch as the reserve keeper they did bring in has, as previously discussed, been a bit poop at times. Whatever Liverpool career he turns out to have, Takumi Minamino was a no-brainer at the £7.65m he cost from RB Salzburg in January.

Manager’s job security:
LOL. Klopp could stroll through Stanley Park wearing a Manchester United shirt while reading The Sun and saying “Liverpool are just another football club imo, there’s nothing inherently special about them” and he’d still be safe as houses.

What they need in the summer:
For this season to be completed please.