Home F365 Says Liverpool should do precisely nothing this summer… 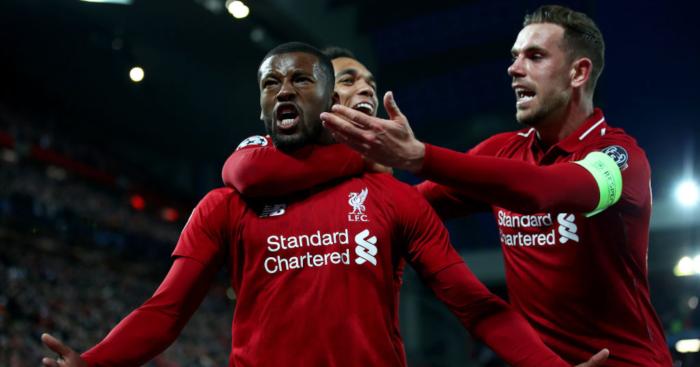 Manchester City’s win over Leicester on Monday night has given them a critical advantage. Most likely, Liverpool will end the season with a record number of points in the current era, with the most won by a side finishing second and yet with nothing but pride to put on the mantelpiece.

Pride and possibly a European Cup, which should certainly take the edge of things, but the fact remains: Liverpool have been near-perfect in the Premier League and yet, somehow, still not quite good enough.

Theirs is a significant achievement. Doubtless it will be attacked with confected mirth, but in any other year and in competition with almost any other rival, this would have been one of the great seasons. So good, in fact, that it’s difficult to know what the logical next step is. They may have let a ten-point lead slip on their way to this position, but that wasn’t the consequence of any great collapse or significant squad deficiency; there is no obvious flaw to correct.

City’s situation is different. When summer arrives, a further £200m or £300m will be used to buttress Pep Guardiola’s position at the top of the English game. It’s by-the-numbers improvement, but it’s a strategy which works. They can afford to deal right at the top of the market and to pay the highest wages. One could also argue, slightly perversely, that they actually have the greater need in their first team. Fernandinho’s ageing legs have been concerning for some time and, it also transpires, Benjamin Mendy is made of glass.

By contrast, Liverpool are set. An additional centre-half certainly wouldn’t hurt and, if Simon Mignolet chooses to leave, a back-up goalkeeper would do no harm either, but there are no imperatives. As the second-leg comeback against Barcelona so conclusively proved, there are assets within the depths of Jurgen Klopp’s squad which are still appreciating.

In that regard, the transfer market is really a threat. In previous years, it’s been used to strengthen Klopp’s hand and to provide the resources for him to enact his football vision. Now, with those parts in place, the ratio of risk to reward has shifted. New signings would bring uncertainty and potential discord at a time when, arguably, Liverpool’s greatest asset is internal chemistry.

Their mission over the post-season is to protect that chemistry, with justification lying in the reasons behind their rise. While Klopp’s first XI is the envy of almost the whole of Europe, none of the players who comprise it – with the possible exception of Virgil van Dijk – enjoyed the status they now have before they arrived at the club.

Mohamed Salah, for instance, was an excellent player before he moved to Merseyside, but now he is special. Sadio Mane and Roberto Firmino were in similar situations: coveted, certainly, and pursued by plenty, but not in the way they would be now if they were to become available. Andrew Robertson is another instance, Georginio Wijnaldum also. In each case, the true worth of the player was revealed by Klopp’s style of play and, over time, by the combinations which have developed within the side.

So that’s the precious commodity. Klopp’s famous line about his philosophy is that the counter-press is the best playmaker in football and, reading between the lines, that suggests a clear dependency on system over individual. The components matter, obviously, but not nearly as much as the overall functionality.

It’s an ideal scenario for Liverpool, because it’s the only way they can compete. While they may enjoy financial supremacy over clubs like Arsenal and Tottenham, and all but the wealthiest in Europe, domestically it is impossible for them to match Manchester City, Manchester United or even Chelsea stride for stride. Taken further, that reality also implies that in any straight contest with a club like City, they must mine their advantages in a different way to be successful.

Particularly now, when the balance of the squad seems close to being optimal. Particularly so when players like Fabinho and Naby Keita are still nowhere close to realising their potential and will almost certainly be more productive during their second seasons. When that’s the case, when no obvious gaps exist in a squad and there is still latent talent within it, the smartest move is to avoid adding new ingredients to a group and, instead, allow it time to mature. Liverpool already have arguably the most established playing identity in the Premier League and yet, perhaps, there’s still a sense that we don’t yet quite know what they’re capable of being.

After all, this team will likely reach 97 Premier League points and a Champions League final despite Van Dijk still not having a full-time partner, Joe Gomez not being fit, goalkeeper Alisson still adjusting to English football, and Klopp’s midfield still – really – being a work in progress. Maybe, given the slight tenuous situation behind them, Liverpool’s front three isn’t even operating at its absolute limit.

What a thought that is. But, then, these are the conditions which breed successful football. An established player is known and trusted. Consequently, he feels at ease taking risks and playing on instinct without fear of reprisal. Conversely, a new signing is on trial. With his coach for his place in the team. With his teammates. Most prohibitively, with supporters whose trust he’s yet to earn, and who have lumbered him with expectations precisely commensurate to his transfer fee.

That’s a reality of the game, a challenge facing any player who moves club. It’s an inconvenience, though. Transfer culture often ignores the awkward period which follows after the YouTube highlights have lost their allure. What is the player’s best position? Who should he play alongside? Solvable problems, of course, but ones which it takes time to work through and which, potentially, can stymie momentum within a season.

Momentum which Liverpool desperately need if they’re to finish a place higher next time. They’ve already proven themselves good enough to reach two successive Champions League finals and they’re heavy favourites to lift the trophy this time. Crossing that last river at home, capturing the Premier League, requires some mild, organic growth, not dramatic change from the outside.

In his biography of Klopp, Bring The Noise, Raphael Honigstein described one of the first meetings between the German and John W Henry. As part of his job pitch, Klopp spoke of the need to activate the Anfield crowd. Three years later he’s succeeded in doing just that; there is clearly now synergy between stadium and team and that symbiosis is vital. There’s something about the way this team plays and the collection of players within it which these supporters are responding to. It’s not just the success, it’s deeper than that – it’s why Anfield is frenzied rather than loud. And, in a way that the Etihad generally isn’t. Or Old Trafford. Or Stamford Bridge.

So it’s another little advantage. What it’s worth is hard to determine, but there’s little sense in compromising it with the anxiety and debate which comes with major transfer activity. Not now, not at this point of Liverpool’s growth cycle.

Klopp’s brand of football seems to depend heavily on familiarity. In a literal way, because anyone who plays for him has to learn the rhythms of his philosophy. But also because his team’s energy appears to be drawn from the atmosphere within the club. This is a happy, contented squad, comprising personalities which seem to slot together well. On the basis of the improvement seen in many individual players, it’s also a very fertile environment.

Again, why interfere? If there are no structural issues – which there aren’t – and if the team’s inability to overcome City can’t be attributed to anything other than sporting idiosyncrasy, why alter the chemistry in any way at all?