Home Mediawatch Liverpool should stick Grealish and Firmino in midfield… 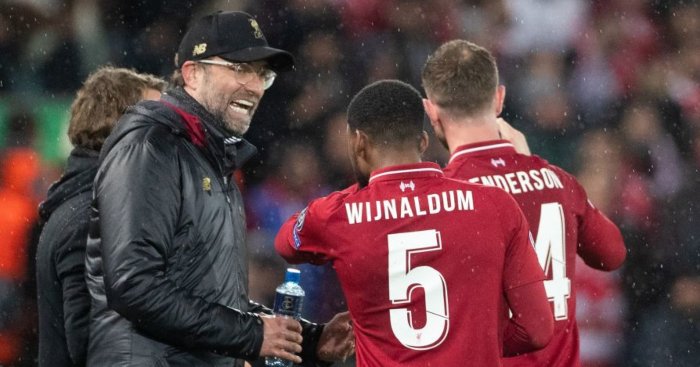 Player rating of the day
The award goes to the Daily Mirror, who saw Sergio Aguero’s three goals and one assist against Aston Villa and deemed it worthy of an 8/10 – same as the presumably still napping Rodri.

Small-time Crooks
Does Garth Crooks pick a 3-4-3 formation in his BBC Sport team of the week, featuring a midfield of Juan Mata, Kevin de Bruyne, Roberto Firmino and Bernard?

Does Garth Crooks name Reece James, who practically played as a right winger, and natural central midfielder Fernandinho (whose side won 6-1) in his defence alongside Virgil van Dijk in what might be the most attacking line-up since Ossie Ardiles was a manager?

Does Garth Crooks state that he is ‘not in the least bit surprised’ Reece James ‘has finally made my team’, as if he is not in actual control of who is picked?

Does Garth Crooks describe Van Dijk’s quite basic ponytail as ‘a man bun’?

And don’t make the mistake of thinking he has just selected 11 random players goalscorers: his explanation for Firmino – ‘his surprising physicality means he could handle a midfield role in my team’ – suggests he has taken into account tactics and roles and chosen this as an entirely serious and balanced team to play an actual match together.

50 shades of Gray
The selection of Firmino in central midfield does something of a disservice to Liverpool’s actual midfielders. Alex Oxlade-Chamberlain was far from his best against Tottenham yet still hit the post. Jordan Henderson made a couple of mistakes in an otherwise fine performance. Georginio Wijnaldum was once again excellent, one error aside.

Hell, they wouldn’t have won without Adam Lallana’s substitute cameo.

But Crooks is not alone in overlooking their contribution. Welcome to the party, Andy Gray.

“If I was a coach of any other top six [side] – and I include Liverpool in this – he would make the team better,” he began on beIN SPORTS on Sunday. And as undoubtedly talented as Jack Grealish is, it seems remarkably brave to express such a sentiment a) after his side were beaten 6-1 by a member of the top six, and b) with Liverpool and that midfield 14 points clear atop the Premier League table.

That was enough to earn a deep breath from Peter Reid and a simple: “That’s a fair old statement.”

The only sensible man in the room continued:

“Well there’s different types, isn’t there? Henderson, he is energy, will to win, gets it, gives it. Wijnaldum the same – they go with the three flair ones at the top end, don’t they?”

But Gray was not to be perturbed.

You can count Mediawatch among ‘some people’.

To reiterate, this is a City side that just summarily deconstructed Aston Villa. And to suggest that Grealish is better than Wijnaldum is at least partially moot considering they play vastly different positions most of the time. But it is also objectively silly and a blatant misunderstanding of what it is Wijnaldum does for the world, European and future English champions.

“I think he’d get into the City side,” Gray adds.

Cue another long pause and sharp exhale from Reid, who clearly did not have the foresight to prepare enough methods of valid disagreement.

“I like Bernardo Silva. I like De Bruyne,” he offers, resisting the temptation to just leave the studio:

But then Gray interjects: “I love Bernardo Silva but I think he’ll play from the left. David Silva’s going. I know they’re grooming Foden. [Grealish is] much better than Foden. Right now? Much better.”

Reid thankfully does Mediawatch’s work at this point with: “Well, he is only 19. He’s gotta develop.”

Gray’s response in the face of a fair and legitimate counter-argument?

“Much better than Foden.”

Grealish is excellent. But to state – not speculate – that he would make Liverpool “better” is quite something. And to insist – not imply – that “he’s better than any of Liverpool’s midfield players” is to forget the existence of Fabinho.

Mediawatch would bloody love to see Grealish dropping deep alongside the two central defenders in possession, mind you. If that Wijnaldum fella can do it, then it should be a breeze.

Jack it in
Actually, do you know what, we’re fully on board with Liverpool selling Wijnaldum and Keita and having a starting central midfield of Grealish and Firmino going forward. Let’s bloody have it.

Murphy’s law
Danny Murphy is also of the belief that Liverpool should sign Grealish. He told the Mail on Sunday:

‘Even though Liverpool are currently well-stocked for midfielders, what if Gini Wijnaldum doesn’t sign a new contract and James Milner gets to a certain age?’

Ask a big question
‘The big question remains – is he better at centre-forward or out wide in a front three?’ – Alan Shearer, The Sun.

Hmm. Marcus Rashford has scored two Premier League goals in six starts in one position and 12 in 16 in the other this season.

‘Instead, poor finishing meant they went in with just a one-goal lead. And they were fortunate to get that as replays showed ref Martin Atkinson was wrong to award them the throw that led to Roberto Firmino firing what turned out to be a 37th-minute winning goal.

‘It ensured Liverpool became the first in Europe’s top divisions to reach 50 league goals this term.’

Manchester City and their 62 goals will be devastated.

Kylian me softly
‘Fabinho wants Mbappe to join him at Liverpool in £257m deal’ – The Sun.

Mediawatch wants world peace and for Piers Morgan’s platform to be removed but there you go. It would be so, so weird if Fabinho didn’t want one of the world’s best players – and a former teammate – to join his current club.