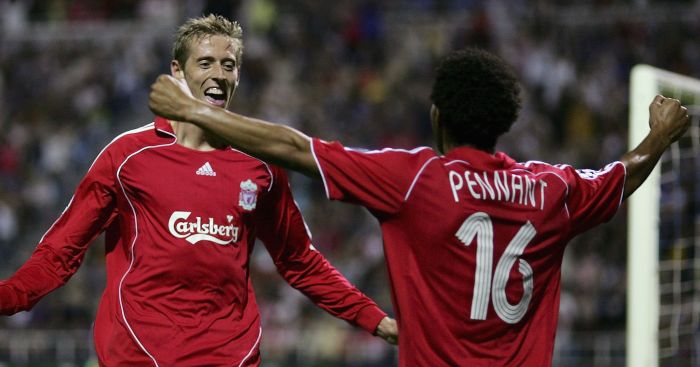 Rick Parry admits that Liverpool decided to sign Jermaine Pennant and Peter Crouch over Dani Alves when he was chief executive at Anfield.

Parry spent 12 years at Liverpool and was heavily involved in transfer dealings between 1997 and 2009, and he has revealed a deal for Alves was possible but they opted to sign two players instead of one.

Alves has won two UEFA Cups, three Champions Leagues, six La Liga titles and one Serie A title along with a host of other silverware in his trophy-laden career.

The Brazilian is rumoured to be on the verge of a move to Manchester City this summer but Parry reveals he could’ve been plying his trade in the Premier League much earlier if things had gone differently.

“We had the deal – finally after enormous complications – tied up for Dani Alves and then the decision was should we buy two players or should we spend all of that on a full-back,” he said in an interview with BBC Radio Merseyside.

“Alves wasn’t the player then that he is now. But he always looked like he would be a great player.

“Would he have been a better signing than (Jermaine) Pennant and (Peter) Crouch for example? Probably yes, but it’s easy with hindsight.

“Clearly, we were trying to make that final step. We didn’t have Chelsea’s money so we were trying to be smarter. Looking back, if I could do anything different, it would be to focus on buying one at a time rather than having to buy five or six every season.”