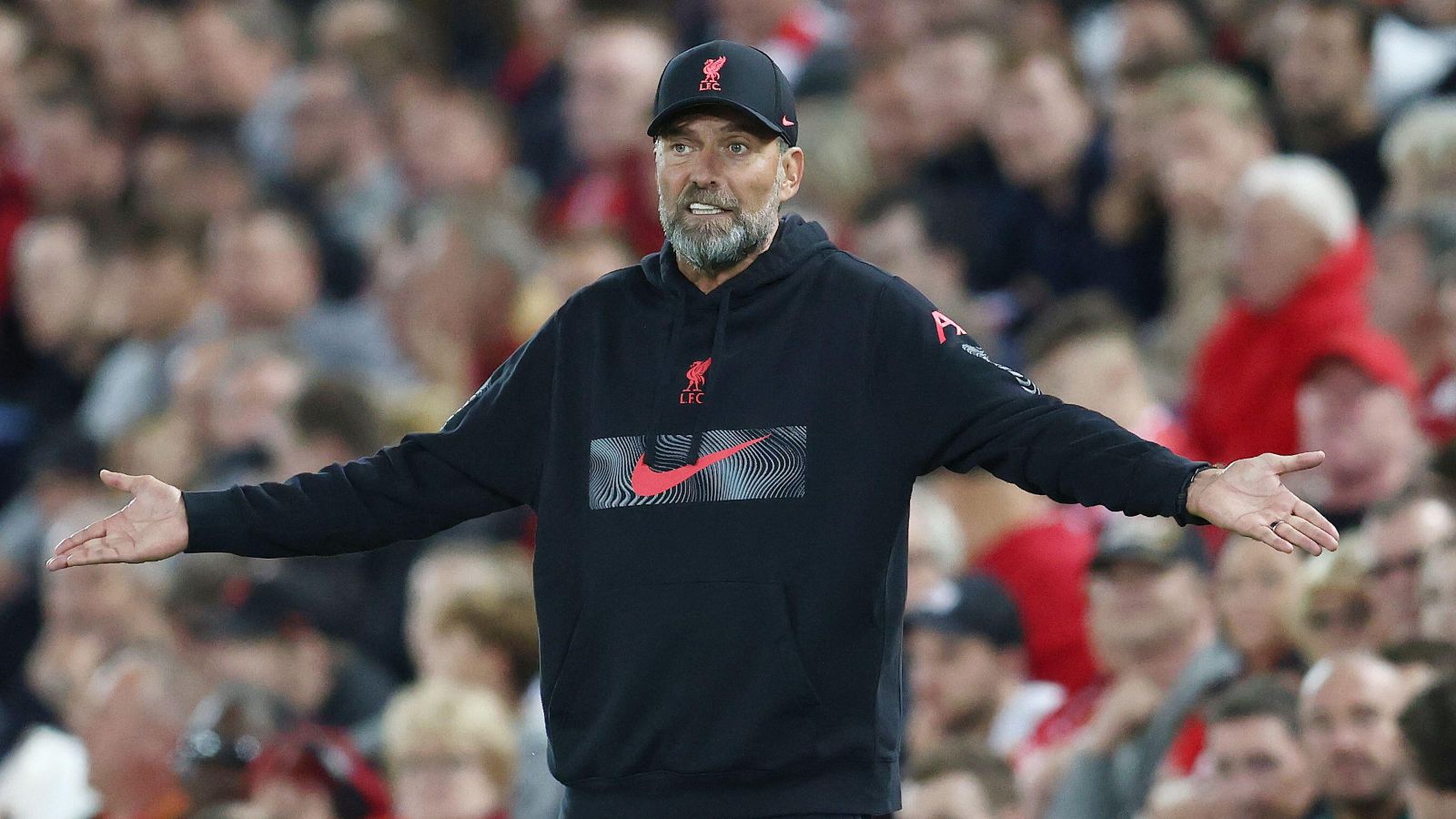 A Mailboxer is losing faith in Liverpool boss Jurgen Klopp over his summer transfers. Plus, transfer success for Chelsea and what value is there being in a competition you don’t win?

Liverpool’s transfer policy
I find myself in the curious position of questioning Liverpool transfers for the first time since Klopp came in..

Sure Karius and Keita have been failures but at the time I trusted that the club has done their diligence and carefully selected transfers. Now I am definitely not sure.

Firstly talented though he may be signing Nunez was a bit unusual. A player who didn’t fit our current play style and who has had repeated problems with temperament seems an unusual Klopp buy. He’s shipped out all the weaker minded troublesome players except Keita and he’ll be gone soon too. But he’s young so there’s plenty of time for it to work out.

Then with an already creaking and old midfield we didn’t seem interested in anyone with Klopp rather laughably listing 2 players who are always injured (and injured at the present – Keita and Ox) and one player who is gonna need a mobility scooter as players he can count on which means he doesn’t need a midfielder. Then after everyone picks up an injury and we desperately need someone who can stay fit we sign a player whose had 15 injuries in 4 years and who ALSO has attitude problems as described by two managers at Juve and staff at Barca as well.

So to help a midfield full of injury prone players who are currently injured we paid £4m (and his wages) to loan an injury prone player? Such a baffling decision. It would have been better to just give youth players a chance instead, at least they would be building experience for the future of Liverpool.

So on to Saturday were we can expect to see Nunez get wound up and sent off, Arthur come off injured 8 mins after coming on, a thrilling nil all draw and a post match conference where Klopp blames the wind for not having a shot until 95th minute while simultaneously congratulating the team for playing a good game. At least our strategy of barely having any shots on target will mean Pickford can’t do that annoying falling down in slow motion thing. He should just fall down fast…
Like the rest of his teammates
Lee

Cramp
I must confess that i didn’t watch Liverpool v Newcastle, but I have seen the reports and read the letters page about Newcastle’s time wasting and injury feigning including going down with cramp.  This is something that has been on my mind for a while and to be clear, it isn’t just Newcastle.  Cramp is not an injury, it is a fitness issue.  A player getting cramp when it genuinely occurs is because he has been given the run around by the opposition, but the game being stopped because the player has been out run is the same as the game being stopped because a player is out of breath.  Surely teams should be rewarded for being fitter than the opposition and the referee shouldn’t stop the game so the player who ate all the pies and had too many lagers the night before can recover.  Having said that, if the referee is going to stop games because a player isn’t fit enough, there is hope for all of us, so it isn’t all bad news.
Rob

What value is there being in a competition you don’t win?
There’s often a slight used against those playing in the lower tiers of European competition; the old “Thursday night football” gambit.

It had me musing. Is it better to win a weaker competition or be knocked out in fourth place / semi finals (or worse)?

Obviously it’s better to be involved in the higher competition, certainly in terms of money and prestige, but it’s a little like the fourth place award we all used to mock Wenger’s Arsenal for (and now with the hugely competitive nature of the league that’s something ever more valuable). But what value is there being in a competition you don’t win. Only one team can win it, and the competing is half the fun, or indeed all the fun for most teams. Does it take it away that you know you’ve got no serious shot? For players it’s a shop window, but for clubs, what is it?

Does that mean it’s better to be in the Championship and win it than be in the Premier League and come 4th? No of course not. Maybe leagues are a different fish. How about getting beaten by City in the final of the League Cup?

So – and this sets league position aside for the moment – if United win the Europa this year, and Liverpool, City, Chelsea or Spurs don’t win the Champions League, who has done better? Runner up is the first loser, after all. Better to have loved and lost?

I wouldn’t have fancied our chances in the CL this year, certainly not after last season – it’ll take at least this year to bed the team in and fix any outstanding issues such as strikers – and our failure might have been fairly dispiriting, but we should consider ourselves to have a realistic shot at the Europa.

Like they say, it’s the hope that kills you or at least hurts the most. Believing you have a shot but missing out nearly every time, is painful. It certainly was for United fans when we lost finals. Maybe that’s why the fans of certain teams seem so in pain so much.

This year United fans have little expectation beyond seeing improvement. And with things going as they are, we can sit back, watch and enjoy the trials and tribulations of others.
Badwolf

Worst case Antony
Jerry’s worst case scenario is that Antony flops and they sell him to Everton in a couple of years for a quarter of the price. Because money means nothing to Man Utd.

Well, if Antony does indeed turn out to be an Everton-bound failure, that will also have meant a couple more years of mediocrity for the club. Two more wasted years during which they’re held to ransom by clubs who know how rich, clueless and desperate they are. Two more years for them to slip even further down the pecking order, until the only players that would even consider them are the bang-average mercenaries who nobody else wants, the ones looking for a big payday before finding their level at Everton.

Which is pretty much where they are right now, I suppose.
Martin, BRFC

Spending too much…
Interesting point from Jerry about it not mattering if Man Utd over pay. He may be right. However he goes on to say the same for other ‘big six’ and that isn’t true.

Arsenal overpaid for Pepe, Lacazette and then for Auba’s wages. And this cost us. In opportunities not being taken, in underperformance, and budget. The same would be true of any costly Liverpool or Spurs mistakes. The money may be vast for these clubs but it’s not infinite. So not saddling yourself with vast contracts and players not worth the money really is important.

It’s not for City. It won’t be for Newcastle (assuming FFP doesn’t bite). It used to not matter for Chelsea, time will tell under the new owner. And it doesn’t matter for Man Utd. Currently. Given the financial juggernaut that the premier league is, and the commercial behemoth Utd have become, maybe it never will. Though. I’m unsure ANY business can be completely safe long term if they fritter money away. The thing about all that commercial income is it is at least somewhat related to on field success. There will be a point where being the banter club stops attracting noodle partners. You’re probably right Jerry. But that ‘probably’ would hang heavy for me.
Robert G

Forget Antony or Casemiro – the biggest scandal of the transfer window is Jerry paying €35,000 for a Nissan.
James

Transfer success for Chelsea
I think everyone is jealous and attempting to pan wonderful business done by Todd Boehly.

Yes it does appear he was learning on the job.  Yes it does appear he may have overpaid for Cucurella(what a wonderful player though!). Yes it did look like he wasn’t able to use the traditional machinery’s of Chelsea transfer dept. And maybe lost one-2 of their initial targets.

However, he got Koulibaly who looks fine. He got Fofana , who is far better than Kounde and would hit ground running. Cucurella is perfect fit already. Sterling and Auba are both going to score 15 goals each which we desperately need. We picked up a DM on loan. And few top young talent for future.  What’s not to like. And everything Tuchel asked for.

Critically all of the signings are first team players and not bench warmers. Which almost refreshes the team and also gets us a new CAM in Havertz who can go back to being the creative no.10 he is (Mason on bench).

I think we did amazing in the market, while Neville can throw as many jabs as he wants. Who takes him seriously now!! His melt down after ManU second loss of season to try and force out owners. Having no answer for Jamie’s questions and went silent after ManU picked three wins since. He’s a joke.
B CFC (Tuchel has to deliver now or Poch is on speed dail  for Todd)

Further evidence that football only began in 1992
Well you only have to look at the mails this week – check Leeds 7-0 v Southampton from the 70s and watch Bremner and co taking the mickey – puts Richarlison’s three keepie uppies in context.

Kids today…..
Steve from the Gelderdend

Daft excluder 2
Honoured that EDQ felt the need to consult IFAB (hoping he didn’t know that off-the-cuff but I’m sure he did!) following my grammatically dreadful entry but he’s missing the point. Why the jiggery are you allowed to just lay down in the middle of the area? It looks stupid and robs creative players of the chance to do something special. Also takes some of the jeopardy out of conceding a free kick in and around the area. It used to be fun seeing a creative player take a chance and win.

Since you can’t win a penalty (thanks IFAB!) by inadvertently walking into someone who is deliberately laying around and tripping over, perhaps you could just twat the ball hard and low – you know the wall is going to jump and who knows where the ball will end up!

Where does it end? Players hanging from the crossbar to block top corner efforts? (cue the old IFAB brigade!)

I just don’t like it and want it to stop – surely I can’t be alone?
Dastardly Tom (2 IFAB references in one mailbox? Football used to be fun. F365 used to be fun!)