Home F365 Features Prick of the Week No. 10: Liverpool’s army of Buzz Killingtons 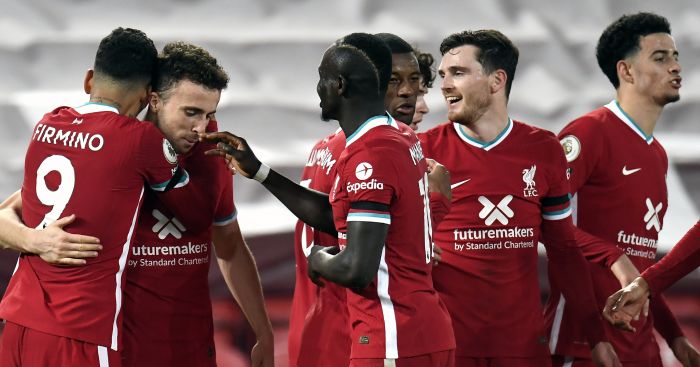 Everyone else is playing their part in making this the Most Wide Open Season Ever, apart from one team. Sure, they toyed with the idea briefly for one whole game but then decided they weren’t going to play along with everyone else and were just going to ruin it. Again. The miserable, brilliant sods.

So who’s this week’s prick then?
Liverpool. Yeah, I said it. Liverpool Football Club is a prick. We’ll get into why this is in fact a massive compliment shortly, but if you want to fire off your tweet/email/comment now while the blood is up then please be my guest.

What have they done?
They’re just spoiling it, aren’t they? The one thing 2020 looked like it might give us was a really properly bonkers Premier League season where anything could happen but no, we can’t even have that. Instead, the best team in the country are just going to win it again. And probably with plenty to spare.

Even when they’ve somehow managed to lose 7-2 at Aston Villa. Even when they’ve invented the concept of multiple soft tissue injuries. Even when they’re up against a Leicester team that is absolutely flying. When some, admittedly giddily even by 2020 standards, were saying the Foxes might even be favourites at a ground where Liverpool now haven’t lost in 232 years, the hosts simply flattened them.

And we all should have known, because it happened a year ago as well. The comparison with last isn’t perfect – we were further into the season with Liverpool’s dominance more solidly established and it happened at a whole other ground – but it still felt similar. Last season it was after the additional endeavour of the Club World Championship thing that Liverpool, supposedly at their most vulnerable, faced a Leicester team cruising along nicely near the top of the table. If Liverpool are going to be exposed, now’s the time. Now we’ll learn something about this Liverpool squad and their manager. Liverpool simply flattened them.

For 4-0 at the King Power on Boxing Day last year, read 3-0 at Anfield on November 23 this year. Quite a bit has happened between those two matches, but Liverpool are still just much better than everyone else.

Read the room, guys. People liked the wild unpredictability. You can tell as much, because everyone’s still trying to pretend things could still be different this season. Tottenham are technically still top, which is great craic and fair play to everyone who’s enabled it, and haven’t Spursed things up for a good few weeks now (although, in a way, doing an absolute number on Manchester City to go top of the table on the very weekend events elsewhere conspire to show precisely why they will not in fact win the title is a new and exciting branch of Spursiness, but I digress) and if there’s one thing we know about Tottenham it’s that they’ll definitely stay the course in a title tilt. Meanwhile the tabloids are still pretending that plucky mid-table outfits such as Manchester United could yet “do a Leicester” and launch a wildly unlikely title challenge from miles back.

Even the bookmakers are joining in, by generously still offering outlandish quotes of 6/4 for a Liverpool title win that we all of us know in our bones is now absolutely certain. Ever the wily pragmatists, though, they’ve at least offset that by insisting City remain 11/4 second favourites.

For all the talk that this season is like The Leicester Season, it’s starting to look far more like the one after it, when everyone sort of bollocksed about dropping daft points for six weeks or so because football was all mad and unpredictable now and then Chelsea just went “Right, enough of that” and won like 12 games in a row or something while everyone else was still fannying about and that was that. This season is that season, except Liverpool are the Chelsea.

Spurs are still Spurs, funnily enough, currently firmly on course to finish second having “put the pressure on” the eventual champions.

Any previous?
Racking my brains and simply cannot think of Liverpool ever being a prick before. Absolutely nothing coming up. They do have previous for Winning Everything Like Dreary Brilliant Robots but it was ages ago, from the long-forgotten times before the Premier League was invented, and thus doesn’t really count.

Mitigation?
If we all take a step back and allow ourselves a moment of self-reflection and admit we all got over-excited, watching the wildest and most open Premier League season ever, ever, EVER! be won spinning on their cocks by what is demonstrably the strongest squad with the best manager is in fact quite a good banter. And we all enjoyed Jurgen’s righteous pop at the broadcasters, let’s be honest.

So what happens next?
Liverpool ease six points clear by Christmas, 10 points clear by the end of January and are celebrating a title win in front of at least some fans by early April. That same weekend, after a controversial Bruno Fernandes penalty secures a 1-0 home win for Manchester United over Brighton, the tabloids speculate that this could be just the springboard Ole Gunnar’s Solskjaer’s side need to overturn a 10-point gap and secure a top-four finish because, you know, anything can happen in this wild and unpredictable season.

Mourinho Corner
Another huge week for the great man, whose Instagram account continues to flourish. This week saw him break the internet sarcasm record when discussing international friendlies in a post that scored additional bonus points for its use of the word “randomers”, while he then positioned himself firmly in old rival Pep Guardiola’s head with conspiracy theories about Raheem Sterling’s England withdrawal. In lesser news, also produced a Jose masterclass to take down Pep’s City and lead Spurs to the top of the table.

Dishonourable Mentions
Every single Reply Guy telling cricket’s Dele Alli to “stick to football” as if this wasn’t a dreadful idea both generally and specifically in the case of Dele, one of the very last footballers you could imagine rediscovering his spark and love of the game by doing nothing whatsoever apart from play football all day every day.