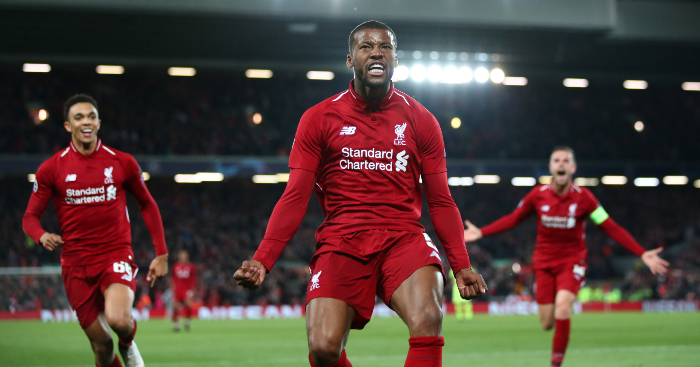 Georginio Wijnaldum admits he “gets angry” with Jurgen Klopp over some of the Liverpool manager’s decisions.

The Holland midfielder, who has revealed the role he played in bringing Virgil van Dijk to Anfield, has opened up over the relationship he has with the Reds boss.

Klopp left Wijnaldum out of his XI for the Champions League semi-final second leg against Barcelona last season and the player admits he was left raging over his omission.

Wijnaldum came off the bench to score twice in the stunning 4-0 win which took the Reds to Madrid, but with hindsight, the 28-year-old accepts the manager made the right call.

“With the manager, it is more or less hate and love,” Wijnaldum told Goal. “I am sure he has the best interests at heart with every player in the squad.

“But sometimes you are so involved in a match and the manager is still chasing you. Then you just boil over sometimes – and, in my case, I do get angry with him.

“I still don’t know if what happened against Barcelona was his real plan. But that night I was so angry and so disappointed that he did not start me.

“Looking back, we can say things worked out all right. We will never know how it might have gone if the manager had started me.”

“Winning the Champions League has given us all peace of mind.

“Now we know what it’s like to win the biggest trophy of them all – and we just want to keep going from here and add even more titles.”