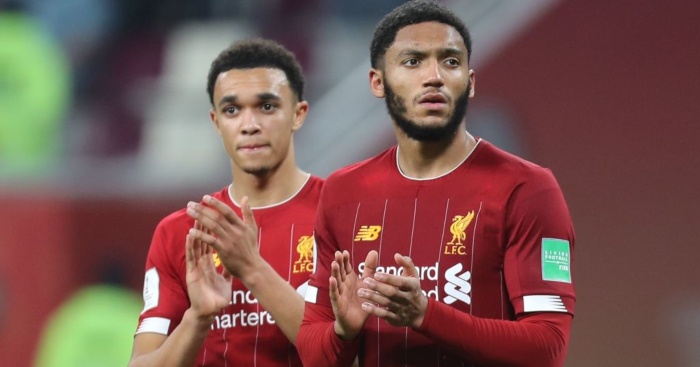 Trent Alexander-Arnold has explained why having “world-class” Joe Gomez back in the centre of defence has given the squad a “masssive” boost.

Gomez found regular playing time hard to come by at the start of the 2019-20 campaign after falling behind Joel Matip and Dejan Lovren in the squad pecking order, and being niggled by an injury.

But having regained full fitness and following setbacks for both Matip and Lovern, Gomez has re-established his formidable partnership with Virgil van Dijk in a 2-0 home win over Watford on December 14.

The Reds have won 19 of their 20 Premier League fixtures this season, but a consistent run of clean sheets proved elusive before the festive period got underway.

When asked to discuss Liverpool’s recent improvements at the back, the 21-year-old full-back told the club’s official website: “That was something that was frustrating for us because it wasn’t as though we were conceding three or four a game, it was always just the one goal that we were conceding. I think over the last few weeks we’ve really matured as a group.

“Obviously Joe [Gomez] coming in as well and doing an outstanding job and proving why we’ve got four world-class centre-halves that can play at any given moment.

“We’ve seen over the course of the season already that all four of them can play together and play to a world-class level, which is obviously good for us.

“I think Joe coming in for us has been massive and he’s shown the manager that he’s ready to play whenever. He’s done an unbelievable job.

“He’s just as solid as anything really. Always there on the cover, always getting the blocks in, his last-ditch tackles are unbelievable.

“The pace and the power that he has is almost like an attacker. He can go toe-for-toe with any attacker and we’d all be confident that he could be faster than them, stronger than them and be able to hold his own.

“For us, that’s massive in terms of the confidence that he gives us as a back four and the players in front. It’s a great partnership between him and Virg. They have a good bond on and off the pitch, that’s something that’s important.”

Liverpool are due back in Premier League action on Saturday, with a difficult trip to the Tottenham Hotspur Stadium on the cards, with Alexander-Arnold wary of the threat a Jose Mourinho team will pose.

“Obviously we know it’s going to be a very, very tough game. They’ve got world-class players all over the pitch, a world-class manager,” he said. “It’s something that we need to be ready for.

“It’s going to be a difficult game but we know that if we play the right way and we have the right ideas – the manager will instil them into us over the course of the week, we understand that we’ll have a game-plan going there.

“Our main objective is to win and that’s what we’ll be hoping to do.”