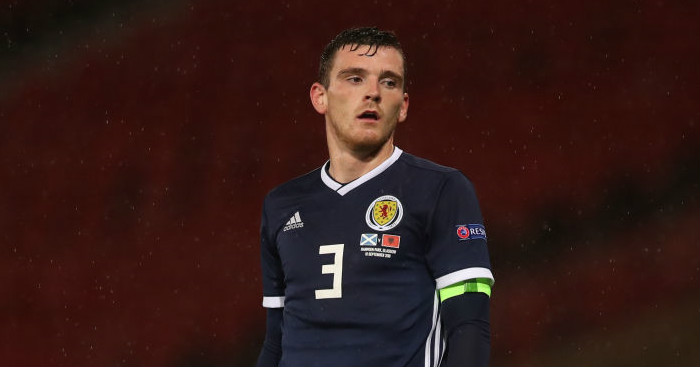 Scotland’s hopes of qualifying for the 2020 European Championship through Group I rely on getting a positive result against Belgium, according to skipper Andy Robertson.

The 2-1 defeat by Russia at Hampden Park on Friday night – after John McGinn had given the home side an early lead – left the home team despondent.

Steve Clarke’s side finished the match six points behind the visitors after five fixtures with the Red Devils three points clear at the top with maximum points from five games.

The Scots have a Nations League semi-final place next March as a qualifying safety net of sorts but, if they are to forego that and reach the finals through the normal route, the Liverpool left-back concedes they have to take something on Monday night from the world’s number one ranked side.

Robertson knows Belgium have twice won comfortably in the two meetings between the sides in the last 12 months.

He said: “It doesn’t matter how far we are behind Belgium, they were always going to win this group comfortably.

“The worrying thing is how far we are behind Russia.

“We could have been the team to compete with them and now they are six points clear.

“That is going to be pretty hard to get back but we need to try and unfortunately we have Belgium at home next.

“There is no other option but to get a result and if we don’t get one on Monday, I think it will be verging on impossible to get through this group.

“We need the belief of that first 15 minutes, that we can cause good teams problems.

“Belgium are a big step up from Russia and when we get the ball we need to keep it because it is tough.

“It is going to be a hell of a task to believe we can get something from Belgium but we need to believe that we can.

“We need a point or three points, it is going to be very hard but you never know, if we show up we can cause teams problems.”