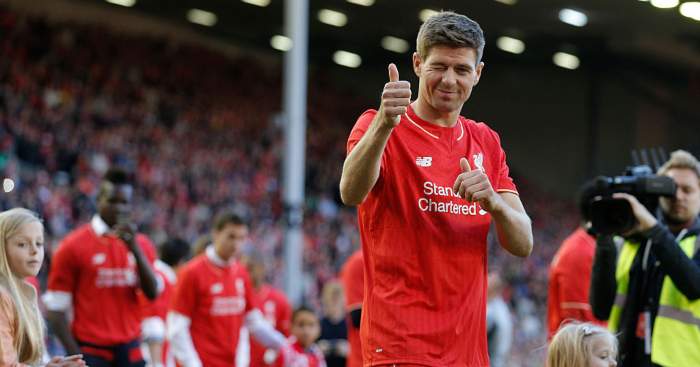 Liverpool chief executive Peter Moore has dismissed suggestions that the club could bring Steven Gerrard back to Anfield so that he can pick up a Premier League winners’ medal.

Gerrard experienced a couple of near misses as he failed to win a Premier League title at Liverpool during his long and distinguished career.

Jurgen Klopp’s men are closing in on the Premier League title this season as they have built up an impressive 22-point lead at the summit.

And some Liverpool fans have called for the club to bring Gerrard back so that he can claim a Premier League medal but Moore has rejected the possibility of the Rangers boss returning to Anfield in the short term.

“Let me explain what would have to happen,” Moore told Soccer Laduma.

“So the question is, ‘can we bring Steven Gerrard back to get a Premier League medal?’ and the question I ask you is: which player do you want to cut from the squad to make that happen?

“If you haven’t noticed, he’s the employee of a different football club at the same time as well.

“Look, we all love Stevie G and we’re all very proud of him for his managerial career, but I keep seeing this ‘bring him in on a five-day contract so he can win a medal’ [but] it just doesn’t happen that way.

“Chemistry in a dressing room is important. Can you imagine that? That you have to cut a player, to say ‘you’re not going to get a medal’?

“It’s not like they’re handing these things out to everybody, you’ve got a squad, right? And thirdly, you can’t add a player to a squad once it’s locked. Other than that, it’s really possible.”