Home F365 Says Liverpool strike the balance better than ever before…

Liverpool are finally covering both their head and their feet simultaneously. Klopp has tucked them in... 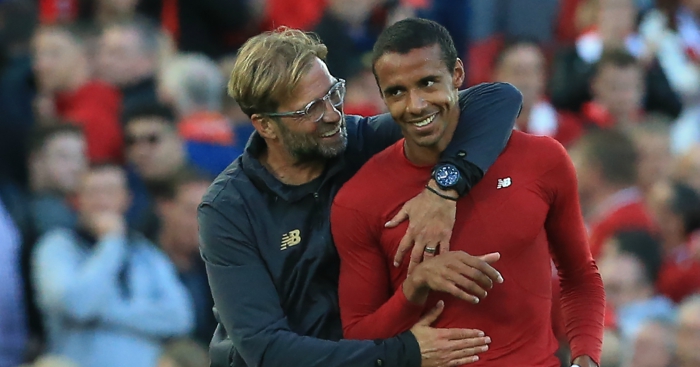 Rafael Benitez captured Liverpool’s perennial problem last September. “The reality is that because they are so offensive, they have sometimes problems in defence,” began the Newcastle manager, teasing some of his eternal coaching wisdom.

“I have talked in the past about the short blanket,” he continued. “If you cover your head, your feet are cold; if you cover your feet, your head is cold. Sometimes when you attack too much, you are exposed in defence and to find the balance is the key to have chances to win titles.”

Eleven months on, Jurgen Klopp has tucked Liverpool in at the top of the Premier League, wished them sweet dreams and tiptoed quietly out of the room, avoiding that annoyingly creaky floorboard on his way. The German cannot even contemplate turning out the lights on this title race until May, for that would be remarkably foolish. But he has finally found a way of covering both their head and their feet at the same time.

Brighton were not dispatched with attacking flair on Saturday, but with grit, determination and no little luck. The control that Liverpool exerted in the first half was replaced with complacency in the second, yet Mohamed Salah’s wonderful goal was enough to see them through.

That was one of the few real moments of forward fluency from the hosts. James Milner created the opportunity with his tackle on Yves Bissouma, and some neat one-touch interplay between Sadio Mane and Roberto Firmino provided Salah with the chance to curl an effort past Mat Ryan. It was a fine strike, and one that had been coming.

Yet Brighton were never out of sight, and certainly not out of mind. Chris Hughton showed as much respect as possible with his starting line-up, dropping chief creator Pascal Gross in favour of a five-man midfield, deployed in front of a flat back four. For some time, Glenn Murray was the loneliest man in all of Merseyside.

In the second half, the 34-year-old was offered more support. Brighton’s three substitutes were all made with an equaliser in mind, as Jurgen Locadia, Alireza Jahanbakhsh and Gross were introduced to test the home rearguard. It was an admirable approach.

And it almost worked. Brighton had six shots – five in the second half, four in the final half-hour, and two in the last five minutes. Alisson had to be at his absolute best to thwart a late Gross header and preserve his third successive clean sheet.

The Brazilian had caused more than a few heart palpitations beforehand. His calm in possession is an underrated aspect of his game, but Murray almost caught him off guard on the ball twice in the second half. The ordinarily unerring Virgil van Dijk was even tested by a belligerent and impressive visiting side, who met the challenge head on.

But try as they might, the hosts were not to be breached, and perhaps their best overall start to a Premier League season was secured. In only three seasons have they scored more than seven goals in their opening three matches (10 in 1993/94, 9 in 1994/95 and 8 in 2017/18). In only two seasons had they not conceded a single goal in their opening three matches (2013/14 and 2015/16). Never before have they managed to strike such an impressive balance from a standing start.

Not even Benitez could truly master that art at Anfield, nor Brendan Rodgers. Both came close, but with pressure higher than ever before, Klopp and his team are breaking new ground.