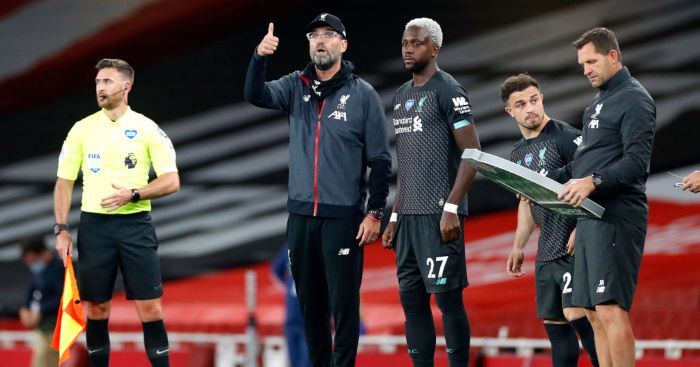 Seven more Liverpool players could leave Anfield this summer after Adam Lallana and Dejan Lovren departed in recent days, according to reports.

Lovren and Lallana were two of the longest-serving players under Jurgen Klopp, but after playing a lesser part in their Premier League title win, the former Southampton pair have both been allowed to move on.

Defender Lovren has joined Zenit St Petersburg in a £10.9m deal. Meanwhile, Lallana has returned to the South Coast to play for Brighton.

But Liverpool may not be finished with player exits there. Despite depth being required to maintain their position among the elite, the Daily Mirror claims as many as seven fringe players are at risk of being sold.

At the top of their list is Divock Origi. The Belgian striker is a cult hero at Anfield for his heroics on their road to Champions League glory in 2018-19. However, he has had fewer opportunities recently, which for a 25-year-old, may start to become a problem.

Nonetheless, Origi recently admitted he would be happy to spend another season on the Liverpool bench.

No potential suitors are suggested for Origi, who has spent time on loan at Lille and Wolfsburg during his Liverpool career so far. His contract lasts until 2024 after he penned fresh terms last summer.

Xherdan Shaqiri could also be headed for the exit door. Liverpool blocked his departure in January, but Jurgen Klopp has only given him eight minutes of action in 2020.

Once again, the report does not say who is in the running for Shaqiri. He has been closely linked with Fenerbahce, though.

Liverpool could also raise funds by ditching some players who they loaned out in 2019-20. For example, Harry Wilson could leave for good after spending the season at Bournemouth.

The Daily Mirror point to the development of Harvey Elliott as one reason Liverpool would not be against cashing in on Wilson – who could still have Premier League suitors despite Bournemouth suffering relegation.

Furthermore, there will likely be no lifeline given to Loris Karius after his two-year loan at Besiktas. With Adrian under contract for another year, there is no room for the German goalkeeper to return.

Recent reports indicated Liverpool would accept £6m for Karius amid interest from Montpellier.

Marko Grujic has also spent two years on loan at one club, Hertha Berlin. However, despite Jurgen Klopp’s admiration of the midfielder – who was his first signing as Liverpool boss – there is equally no space for him.

A pair of academy graduates are also set to move on. After an injury ravaged loan spell at Oxford United, Ben Woodburn is likely to leave. With the Wales international still only 20, it could be via another loan.

And left-back Yasser Larouci, who made his first team debut in January, has just one year left on his deal. Therefore, Liverpool may cash in, with Leeds and Brentford interested.