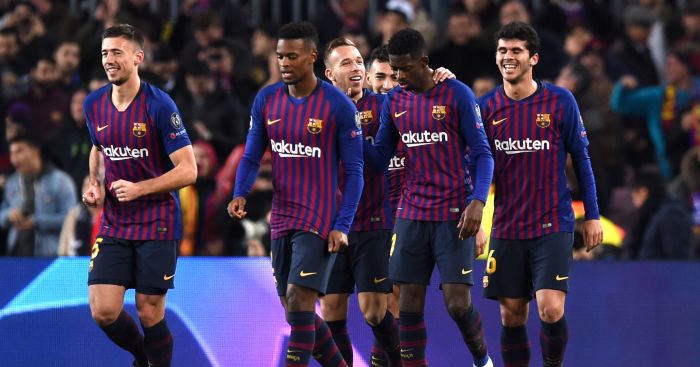 Ousmane Dembele made a dressing-room plea to his Barcelona team-mates before their draw with Tottenham, according to reports.

Spurs got the point they needed at the Camp Nou to progress to the last-16 of the Champions League with Dembele scoring Barcelona’s goal in a 1-1 draw.

Arsenal and Liverpool in particular have been linked with the 21-year-old over the past few months.

The France forward is reportedly unhappy at a club who are convinced he has a gaming addiction, while there have been a number of off-field incidents that have frustrated Barca staff.

Dembele was on form as Barcelona beat Espanyol 4-0 in the derby on Saturday but it was his discipline that made the headlines again as he reportedly turned up two hours late for training on Monday morning.

And Spanish media outlet SPORT claims that Dembele got his team-mates together before Tuesday’s session, which he arrived for 50 minutes early, to apologise for his Monday lateness.

The report continues by saying the speech, although short, was thought to have gone down well in the dressing room as he vowed not to do it again.

Following his goal against Tottenham, Valverde had some words of praise for Dembele.

“He has made a great goal, possible for players with his talent,” Valverde said.

“We are happy with him and we said that throughout the season things happen that we try to solve internally.