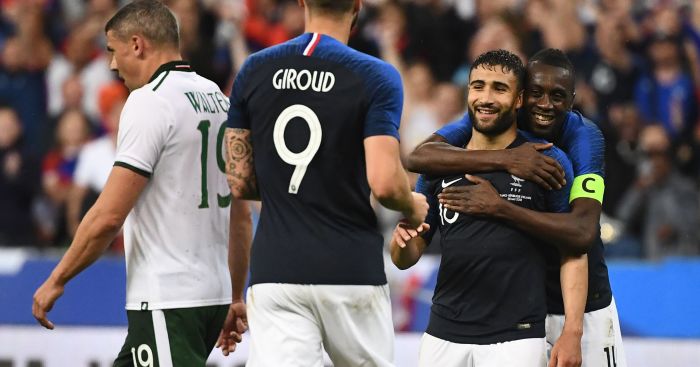 Lyon’s Nabil Fekir was keeping his cards close to his chest on Monday night when asked about reports linking him with a move to Liverpool this summer.

The Reds landed Fabinho on Monday in a deal worth £43.7m and all signs point to Jurgen Klopp trying to get his summer transfer business done early.

And reports have heavily linked Fekir with a move to Anfield with the attacking midfielder seen as the ideal replacement for Philippe Coutinho – who left for Barcelona in January.

Fekir scored one of France’s goals as Didier Deschamps side beat the Republic of Ireland 2-0 in an international friendly.

After the match, Fekir was asked by the media whether he would be joining Fabinho at Liverpool.

“We will revisit that after the World Cup,” Fekir told Canal+ Sport.

When asked whether a move could be announced before the World Cup, he added: “I honestly do not know.”

“I felt good in the front three,” said Fekir about the match. “We have not had much chance to work on it in training. However, we have quality players — it is not difficult to get along on the pitch. It was a good first match and we need to continue like that.”