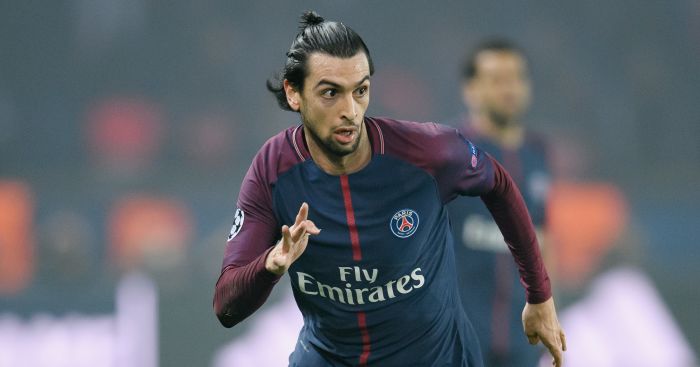 Paris Saint-Germain playmaker Javier Pastore has refused to shut the door on a proposed move to Liverpool or Inter Milan.

The 28-year-old has made just 17 starts for the Ligue 1 champions this season, and with his contract set to expire next year, he has refused to rule anything out.

Pastore, who was handed a rare start in Sunday’s 7-1 hammering of Monaco and provided two assists, was believed to be available in January

Liverpool apparently wanted to bring Pastore to Anfield to replace Philippe Coutinho, while Spurs and Arsenal were also keen on the Argentinian too.

But Italian journalist Gianluca Di Marzio claimed both Liverpool and Tottenham were turned down after offering loans with a view to permanent transfers totalling between €25million-€40million.

Di Marzio claimed that Pastore, who said last month his time in France was “almost over”, would only consider a move to Italy.

“I think my time at PSG is almost over. I still have one year left in my contract and for now I am only focused on the last part of the season,” Pastore told Tyc Sports in March.

But the player has admitted he is still unsure over his future, with his deal set to expire in 2019.

He told Premium Sport: “What will I do this summer? I still don’t know.

“I want to end the season well. We have another cup to win and we’ll give it our all. As for after that, we’ll see.

“This season is more beautiful because we lost the title last time out,” he added. “This season we’ve had a great campaign. We beat Monaco 7-1 and this win gives us strength to end the season well.

“We knew that we’d be crowned champions if we won. We needed to make it happen and we had a great match.

“The result is what it is, but Monaco are still a great team.”