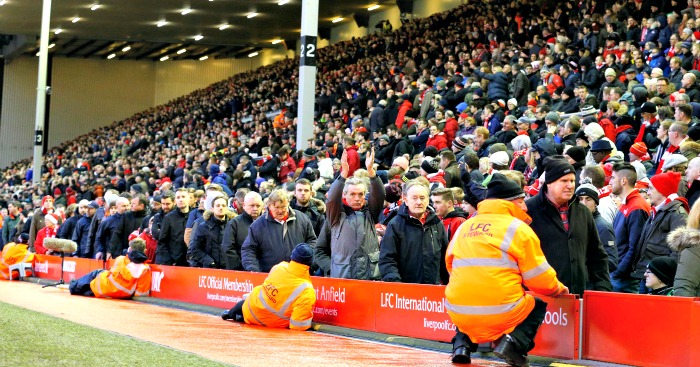 “People should be careful what they wish for…People should make their own decisions but I feel absolutely we have made the right decision and have everyone’s best interests at heart. I respect everyone’s right to do what they think is right but for every fan thinking about that I would say ‘Have a look at the facts’. If people want to leave after 77 minutes that is disappointing but it shouldn’t be because they feel the prices are wrong as there is something for everyone in there” – Liverpool chief executive Ian Ayre.

It’s funny how “be careful what you wish for” is usually a phrase uttered by those in a position of influence or power. Ayre’s statement is deeply patronising – ‘You ignorami couldn’t possibly understand the decisions we’ve made’ – but there is a far more damaging element to his words: threat. You wouldn’t like these owners when they’re angry.

The alleged crime of Liverpool fans was to plan a walk-out in the 77th minute of their home game against Sunderland, in protest against proposed ticket prices in Anfield’s new main stand. Some supporters will see prices decrease, other freeze and more still increase. It shouldn’t need repeating, but these are fans already pushed to their economic limit.

Walk out they did. Thousands of empty spaces in the Kop, videos of chanting supporters shared by thousands of people. “Enough is enough,” supporters chanted. “You greedy bastards, enough is enough.” One hopes they understand the irony of their words. In the boardrooms of elite sports companies, no revenue is ‘too much’. This is an all-you-can-charge buffet. Bring your own knife and fork.

It is difficult to overstate the relative futility of Liverpool’s move. Liverpool currently make £35m from ticket sales. A freeze across the board (with added capacity) would take that revenue to £37m, but the club wanted £39m. In 2013/14 – without the added riches of the new broadcasting deal – Liverpool earned £97.5m from that source alone.

One would have more empathy for Ayre if he had at least been honest rather than turning on the bulls**t tap, the default reaction in football’s corridors of power.

“You know what, you got us,” Ayre could – but never would – have said. “This new stand is expensive, and we figured this was the perfect way to bleed a few more quid out of a set of supporters whose lives are now irrevocably entwined with their club. These are Liverpool fans. They’ll come crawling back.”

Yet honesty seems in short supply from Liverpool’s chief executive. “It’s not about jacking up prices to pay for it, it’s about giving our fans fair value within football and within our facilities,” Ayre said in December 2014. “On ticket prices, the building of this and construction of this doesn’t change anything.”

Ayre’s ‘you don’t know how good you’ve got it’ line is pure emotional blackmail. Supporters asked to pay more for their tickets should not just take the financial punch in the face, but offer their sincerest thanks for the pain inflicted.

This is, of course, where the whole ‘fan as customer’ concept falls down. In any other industry, customers would not need to protest at such rabid greed, but instead choose a different product. Football clubs are different. Liverpool spent its first 100 years acting as a social institution, engendering a loyalty in supporters that would not die. Like English football itself, it has spent the 24 years since largely exploiting that loyalty.

There is an inevitability to developments at Anfield. This week Premier League clubs voted down proposals for a £30 cap on away tickets, and fans continue to be inconvenienced by changes in match times for television scheduling. The only thing that seems to change is the height from which supporters are shat on. In a game of give and take, they seem to be the only ones giving.

There is a tendency to dismiss Saturday’s protests as ineffective, and there is logic in that view. Liverpool will be confident that behind every dissenter is a queue of at least two people, cash in hand ready to fill the space. Realistically, Premier League clubs are so driven by gluttony that only regulatory measures will place a ceiling on ticket prices. Now, large swathes of the game’s traditional audience can afford to watch only from their armchairs.

Yet ‘ineffective’ is not a synonym for ‘meaningless’. A mass walk-out may not hit Liverpool’s owners in their pockets, but it at least sends a message of unrest. The ability of long-time supporters to buy match tickets may not worry the club’s hierarchy, but bad PR does. Take this development lying down, and Liverpool will only take it as carte blanche to implement similar measures.

Perhaps walking out will make a difference, perhaps it won’t; that’s beside the point. This is about reminding Ayre, John Henry and FSG that long after they, the players and the manager are gone, only the supporters will remain. When Anfield’s new main stand has gathered moss and weathered in the rain, still the fans will sing. Protest is not just for revolutionaries and anarchists, but from those who have united to say “no more”.

Liverpool’s situation is replicated to lesser and greater degrees all over the country, so fans as a whole must stick together. Those who have become entrenched in tribal obsession, remember: In this battle of ‘us vs them’, supporters of Tottenham, Arsenal, Chelsea, Manchester United and Liverpool are all on the same side.

So do not mock those who preferred to stay in their seats at Anfield. Do not scold others that left for their alleged disloyalty. Rather than scoffing at empty seats in other grounds, understand the explanation. Each one is a lurid plastic shrine to the greed of modern sport.

Most of all, don’t stop fighting the fight. The moment that football supporters lie resigned to their fate, the battle is lost. Defeat is not the worst of failures. The real failure is not to have tried.