There have been suggestions that Liverpool could dip into the domestic market before the deadline... 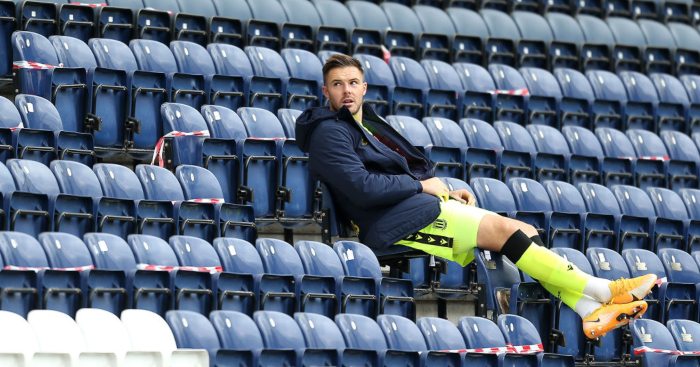 Danny Murphy reckons it would be a “clever bit of business” by Liverpool if they signed Stoke goalkeeper Jack Butland.

Adrian has been struggling to prove himself as a trustworthy back-up for Alisson – who is out injured – following his mistake for their first goal in Liverpool’s humiliating 7-2 loss to Aston Villa before the international break.

The Spanish keeper went on to concede six more goals in the match, making it Klopp’s biggest ever defeat as a manager.

FEATURE: Five keepers Liverpool could sign to stand in for Alisson

And there have been suggestions that Liverpool could dip into the domestic market for another goalkeeper before the window shuts, with Butland’s name mentioned as a possibility.

And Murphy reckons a deal for the out-of-favour Stoke keeper “makes sense” to him.

“I like the thought of Jack Butland joining Liverpool,” Murphy told the Football Index Podcast.

“He is trying to find himself again after a really good start to his career when he was being spoken about as potentially England’s first-choice goalkeeper.

“Unfortunately for him, he’s fallen by the wayside a little bit with Stoke being relegated from the Premier League.

“This might be a tremendous opportunity for him to go to a wonderful club, learn from a brilliant goalkeeper, play some games, and start again. That makes sense to me – I think signing Jack Butland would be a clever bit of business.”